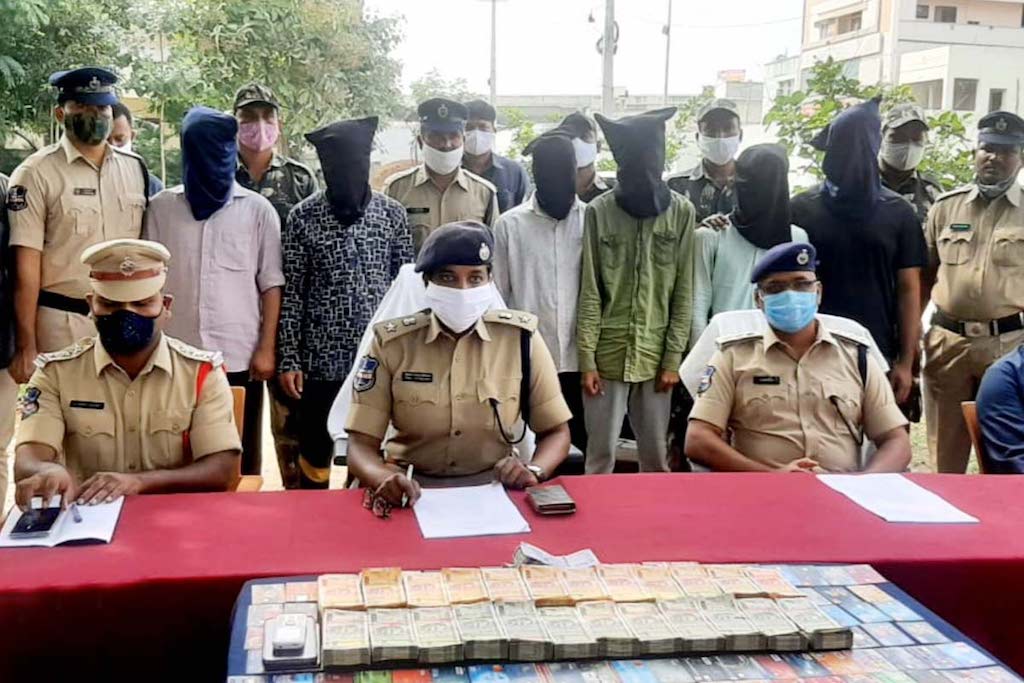 An ATM inter-state gang that had looted an SBI ATM at Baadepally in Mahbubnagar district of Telangana has been arrested by the Mahbubnagar district police. The gang’s members hail from Haryana and Uttar Pradesh and have been allegedly involved in similar ATM thefts in north India. According to the gang members’ confession, the gang had planned to loot ATM machines across south India. Six out of the 7-member gang have been nabbed while one is still trying out his luck not to be nabbed. He is still absconding.

Speaking to the media, Mahbubnagar Police chief Rema Rajeshwari disclosed that on 29th September, the members of the gang entered the SBI bank’s ATM center at Baadepally. They used a gas cutting machine to break open the ATM. They stole around Rs 41 lakh. A part of the loot was charred because of the flames of the gas cutter that was used to cut open the ATM. Soon, a special team was formed to investigate the case and bring the accused to justice.

According to police, 40 blocked ATM cards were found in the possession of Sabir Khan, the main accused who has been named accused number one. Another 34 blocked ATM cards were found in accused number 7 Sakib’s possession. It is horrifying to note that Sabir Khan has a total of 18 pending cases against him in Hyderabad, Haryana, and Maharashtra. It raises questions as to what the Haryana and Maharashtra police have been doing? Why was Sabir Khan not arrested and denied bail? He goes from state to state to commit crimes! This is how Vikas Dubeys are propped up in society. These gangsters become a danger to the police ultimately. The second accused Thalim Khan has five cases while the third accused Zahid Khan has seven cases pending. The other accused Syed Ahmed Ali, a resident of Hyderabad, has been named in 13 cases in Hyderabad city.

The members of the ATM gang have been found to be part of several ATM card exchanging and ATM breaking crimes in Delhi, Haryana, etc. The gang cut open ATM machines with the help of Thalim Khan, a well-trained welder from Pune, who is using his skills for the wrong purpose. The accused number 5 Sakib got in touch with the accused number 7 Rahman, who is a resident of Hyderabad. The two criminals had met at the Chanchalguda Central Prison in Hyderabad while serving punishment for their earlier offenses.

The accused hatched a hi-fi plan. Four of the gang members took a flight to Hyderabad where they met Hyderabad-based Rahman and Syed Ahmed Ali who provided the gang members with a Swift Dzire car to swiftly make their desire of ill-gotten wealth true. They were also provided gas, oxygen cylinders, pipes, etc. They carried out a recce at several ATMs. It was decided to loot the SBI ATM at Signalgadda as it had a generator outside the ATM. The gang closed the shutters of the ATM. They used a gas cutter and in a span of 7 minutes flat, they managed to get hold of the money in the ATM. Then they escaped by trucks to their respective states before the police could track them.

According to Rema Rajeshwari, the members allegedly tried to connect with local criminals in other south Indian states as well so that the gang members would be provided with the required resources to commit offenses. This is quite similar to the modus operandi carried out in this ATM loot. The gang would always cover their faces with face masks. They would first break the CCTV cameras present at the ATMs before proceeding to loot the ATM money. The gang members would make a note of the camera positions through their detailed recce which was carried out before committing any crime. Rema Rajeshwari commended Circle Inspector of Police Veeraswamy, Sub-Inspector Shamsuddin, and the entire police team for swiftly nabbing the inter-state ATM gang.

It is significant to note that Rema Rajeshwari is known for collaborative policing. Her unmatched detective skills have led to the successful solving of crimes involving serial killers, economic offenders, and traffickers. She is a highly acclaimed officer who is also trusted by the Election Commission to ensure free and fair poll in any sensitive district. She has turned a Covid-19 warrior by spreading awareness to control the pandemic in Mahbubnagar. It can be observed from the press conference photo above that Rema Rajeshwari and her able team members are wearing masks and following the Covid-19 protocols.

The nabbing of the inter-state ATM gang adds another dazzling feather in Rema Rajeshwari’s cap and makes the Telangana Police proud of this achievement.