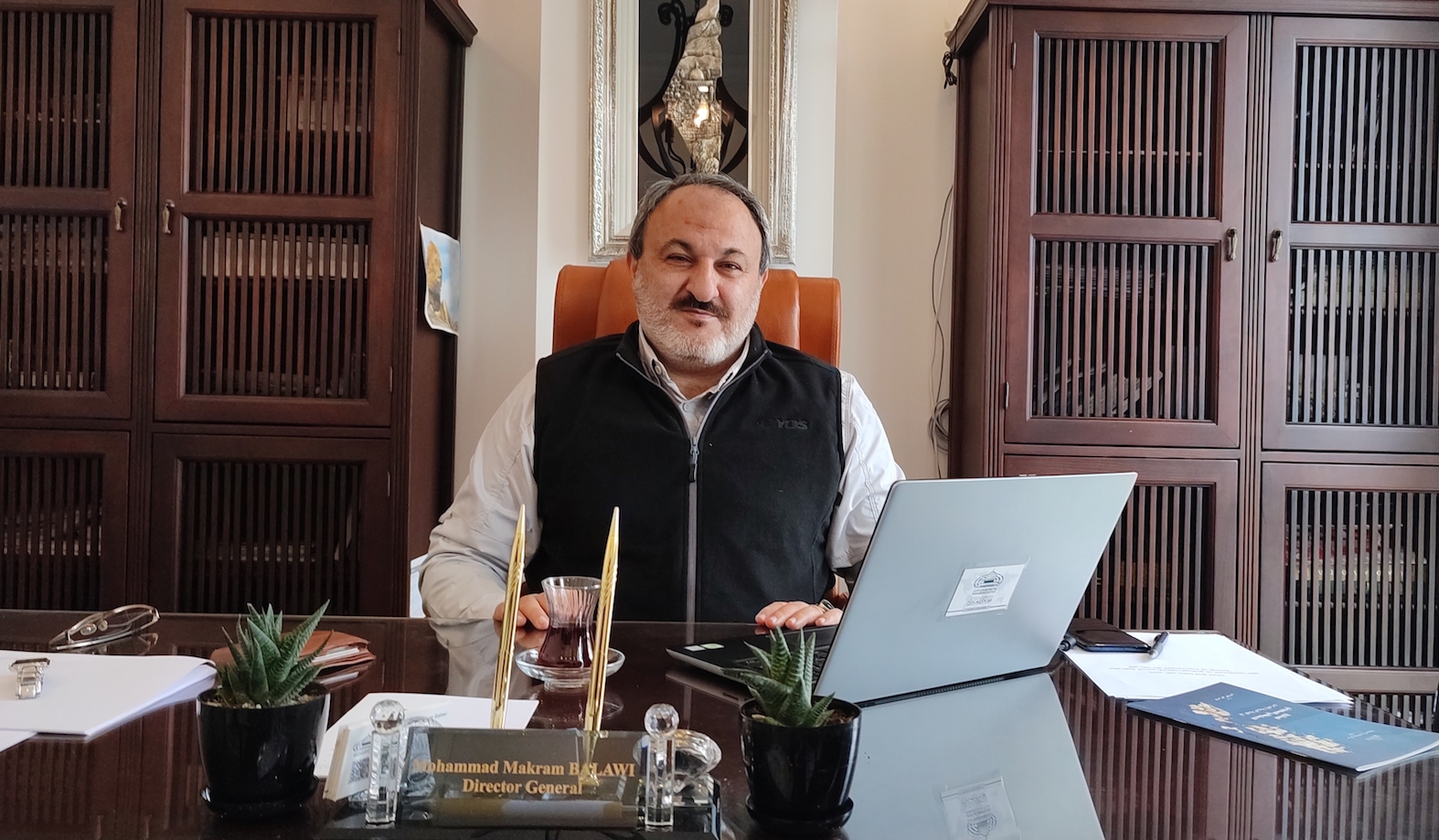 “Inaction by international community encourages Israel to continue its occupation”

Millions of people throughout the world yearn to step foot on Palestine’s holy territory but are unable to do so. Dr. Makram Balavi’s name is one among millions of such people. Their greatest aspiration in life is to at least once meet their people in Palestine and to visit the magnificent Al-Aqsa Mosque, but they are unable to fulfil either of these desires.

53-year-old Dr. Makram Balawi is an academic and writer based in Istanbul. He is the founder and president of the Asia Middle East Forum. He is also an acting member of the Union of Palestine Academics. The author of 43 books, Mr. Balawi is best known for his writings on Asian relations and the Palestinian cause. Despite being born in Jordan, he has a strong connection with India, rather, he considers India as his second home. He spent the most significant days of his life in India. In 1989, he obtained his bachelor’s degree in English from Nagpur University, and then in 1993, he received his master’s degree from the same Nagpur University. After that, he moved to Malaysia and completed his Ph.D. at the International Islamic University there.

Dr. Mohammad Makram Balawi talks about his experiences of living in India and the situation in Palestine in this interview.

Have you ever been to Palestine?

I have never been to Palestine. I am not even allowed to see Palestine, let alone visit it. In fact, most of the 7 million people forcibly displaced from Palestine are not allowed to return to their homeland, i.e., Palestine.

If you were born in Jordan, what is your relationship with Palestine?

In 1948, most of the Palestinians were expelled from their own homes and homeland. My family was also one among them. At that time my father was only nine years old when my grandparents had to leave Palestine. Both of them were buried in Jordan with the desire to return to Palestine. My father stayed in Jordan, where I was born. All my siblings were born there. Even my uncle was born in Lebanon and Jordan. But since then, we have been waiting to go back to our homeland. The United Nations General Assembly founded an agency called UNRWA, dedicated to assisting Palestinian refugees. We were given ration cards till that date. This is the only document that proves that we are Palestinians.

What do you think about displaced Palestinians now?

I think every person has the right to live in his own country. He has the right to be considered a citizen of the country where his parents were born, and where he was born. He should not be treated as a foreigner or a refugee. I am also one of the approximately 7 million Palestinians who live outside Palestine. We are not allowed to return to our homes, villages, or cities and avail of our properties. Not because there is a military or security reason, but because the Israelis occupy them.

If you ever get a chance to visit Palestine, where would you like to go first?

I would certainly like to visit Al Quds, Masjid Al-Aqsa, and also, I would like to see the Mediterranean Sea because I was born in Jordan which is almost a landlocked country. However, going back would not be easy because there are a lot of harassment and security restrictions imposed on visitors especially the Palestinians by the Israeli Authority.

How do you look at International Community in this regard?

The International Community basically taught Palestinians and the rest of the people of the region, that no serious hope could be expected from these international organizations because they only talk, and when they should implement or follow their resolution, they act as if the Israeli occupation has certain international impunity.

The parts of Palestine that Israel occupied in 1967, 55 years until now, there is no serious action against Israel to compel it to withdraw from this part of Palestine which was recognized as Palestine not Israel even by the United Nations and the Security Council. I think many people in our region now believe that unless some concrete actions are taken, the only solution for this tragedy is using force and this is why we see war after war taking place. Because Israel does not compel by international law and does not take international organizations seriously. Superpowers and other big countries do not take any serious action against Israel such as imposing restrictions, punishment, boycott…nothing.

Recently Amnesty International released a report on Palestine. Israel called it anti-Semitic. What is your take on this?

This is ironic because nobody discusses this report, be it the United States or Germany, or other Western European countries. They just reject the report without discussing whether the information is correct or incorrect. They are not concerned with the facts or what’s happening on the ground, they simply want to protect Israel. It aligns perfectly with Israeli policy.

By the way, the report by Palestinians or people who are observing the situation is the basic information because all of us know what’s happening on the ground. The international organization or big powers should recognize these facts and act on them. But unfortunately, they don’t want to recognize because they don’t want to act. They are on the side of Israeli occupation not on the side of the right people.

We see that very often Israel is perceived as a small yet powerful country. What are your thoughts on this?

If there is something good about Israel then take it. As Palestinians, we don’t want it. We simply want to go back to our country. If you like Israel, you may have it but yet, it is an irony because you are doing this at the expense of others and siding with the oppressor. This is unethical, even if it is more profitable at the current time. Yet, the question is, is it the only thing that states are supposed to do? No. The state is supposed to protect the people, not only to produce money and goods and weapons. Many big companies are much bigger than Israel but they’re not recognized as a country. Even some ‘Mafia gangs’ have a lot of money and power; do we have to recognize them as states? No. Our problem with Israel is that it was illegally founded on other people’s land. Not only this, they forced the inhabitants out of their own land. Whoever was left in the country is treated as mere objects as if they are not human beings. The Amnesty report is only one example of what’s happening on the ground.

What is your message to the Muslims around the world who are concerned about Palestine?

We thank those people deeply, not only because they have an Islamic sanctity but because for us, Islam is not just a community it’s an idea and a group of ideals. It is a bunch of lofty ideals such as freedom, justice, and equality. So, it is not only for Muslims even non-Muslims who side with Palestinians, who are actually siding with them because they are right and because they have faced oppression. Therefore, these people have a righteous nature. For that, we thank them very much and we ask them to pursue their struggle for justice and freedom not only for Palestine but all over the world because if it does not happen in Palestine which is at the center of the old-world continent then it would not happen in a remote place. This time it happened in Palestine, some other time it will happen to you or your neighboring country. Just keeping silent on what’s happening in Palestine is actually waiting for another war. It might spread to the other region and the whole world. By siding with the Palestinians, you actually side with humanity, justice, and peace.

How do you look at India-Palestine relations?

We know that politics in India and Palestine are alike and went through many changes. Basically, we need to know that India was always the biggest supporter of the anti-colonial movement and in my opinion, being a realist should not make us ignorant of principles and long-term objectives. We have to understand that India’s long-term interest lies with its neighbors, not with a foreign power that is sponsored by colonial powers.

What was the objective behind formulating the Asia Middle East Forum?

I always felt that after the era of colonization, the bridges between our region and Asia and west Asia became weak. So being a person who lived in many Asian countries, I knew that the future belongs to Asia. I have been close to many Asian people, and I think we should rebuild these bridges. We have been very close in the past but in recent, maybe one hundred years, people became less engaged and they don’t know enough about Asia and Asian countries. To fill this gap, my objective is to create a platform for extending information and ideas on the future of relations between West Asia and the rest of Asian countries.

You have spent a few years in India. How was your experience?

I consider India as my second homeland because I graduated with my B.A. and M.A. from Nagpur University, India. I am a frequent visitor to India. I have been there in many states and have many many friends all over India. I believe that we share a strong historical bond with India. At a time, it was a pillar of our civilization. Still, we share a lot of common things with India. Thankfully, I have positive memories and thoughts about India. I wish the Indian people always peace and prosperity.

Do you have any message for Indians?

My best wishes are always with Indian brothers and sisters. May Indians set a good example of peace and harmony for which its civilization has been known. I hope that this would continue because people everywhere in the world respect and honor great people like Gandhi and Nehru. I hope Indians stick to these ideals in their internal policies and give a very good example of harmony and internal peace.