Yesterday two fresh FIRs have been registered by the police for uploading and circulation of derogatory images of Holy KABA and Quran on the social networking site Facebook and mobile application WhatsApp. While one of the FIR was registered by Thane Police (Navi Mumbai), another was registered by Malegaon police (Dhule district). 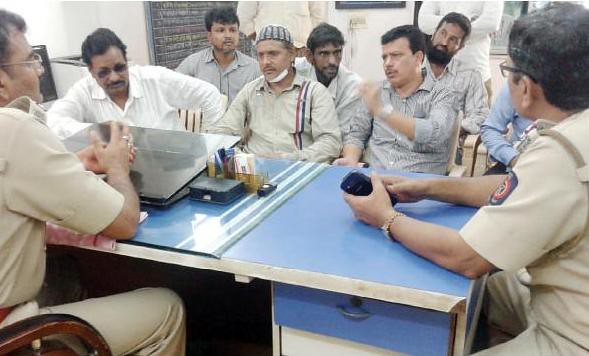 The religious feelings of Muslims in Mumbra were hurt when they saw derogatory images of Holy KABA on Facebook and they got infuriated but due to the timely interference of Minority commission member Syed Ali Ashraf, the possible disturbance was avoided. Mr. Syed Ashraf Ali calmed down the angry Muslim mob, took them to the Thane police station and registered FIR under sections of 295 (A) IPC and 66 IT Act. The mob listened to his appeal of showing patience and not to pay attention to such circulation which was meant specifically to spread hatred and disturb communal harmony prevailing in the society.

It was the presence of mind of one of the person who immediately informed Mr. Syed Ali Ashraf regarding the circulation of derogatory images of holy KABA on Facebook that the communal tension in the area could be avoided as Mr. Syed Ali Ashraf instantly phoned DCP of the area and apprised him of the situation and requested him for immediate action from police. The DCP in turn sent ACP to Mumra police station and recorded statements of gathered mob and insured of detailed inquiry in the case by the Thane crime branch.

ACP Vikram Patil told Mr. Syed Ali Ashraf and gathered Muslims, “There have been many such cases registered across state and police’s special cyber cell is investigating the source of uploading of such images to book original culprit.”

“So far police have learned that such postings are uploaded from foreign countries. We will transfer this case to the Thane cyber cell for a thorough investigation as it is already investigating similar cases”, he added.

There were already two FIRs pending for investigation with the Malegaon police in the same regard of uploading of derogatory images and a fresh FIR has been registered yesterday with the police for the uploading and circulation of insulting images on Facebook and WhatsApp hurting Muslim people’s emotions.

Two weeks before a couple of different FIRs were registered in this connection in Ayesha Nagar and Azad Nagar police stations of Malegaon under the sections of 295 (A) of IPC and 66 IT Act. Police have not yet solved this case and the textile town witnessed another case of misuse of social networking site yesterday when 8 abusive images of Holy KABA, QURAN and holy cities of Makka and Madina were found uploaded and making rounds on Facebook and whatsapp.

In this connection, the town’s police registered a case under sections of 295 (A) of IPC and 66 IT Act with the request of Jabran Khan resident of Marchant Nagar, Malegaon. The police then instantly increased patrolling in the town and were found vigilant to control any disturbance in the town.

After visiting the violence-affected areas in Maharashtra the State minority commission chief Munaf Hakim blamed the city police for its “absolute failure” to anticipate disturbance and take preventive measures in checking the violence that followed the objectionable posts on social networking which resulted in to the loss of crores of public property and brutal murder of innocent Muslim techie Mohsin Shaikh in Hadapsar.

While talking to the press Munaf Hakim said that the violence was not a sudden reaction but was systematically planned by the elements who wanted to target a particular community by misusing technology and circulating hate messages.

“Over the last one year, organisations like the Hindu Rashtra Sena have consistently tried to disturb the city’s social fabric and create tension by displaying provocative banners. We wonder why the seriousness of all this was not taken into account. Adequate preventive measures ought to have been in place,” he said.

“In these cases they are eager to furnish data. I have asked the police to act with equal fervour when it comes to dealing with HRS. It is clearly an organisation which is acting against the Indian constitution, with their divisive strategies,” he concluded.

The chairman expressed his displeasure on the continuity of Facebook account of Hindu Rashtra Sena (HRS) and said, “We have informed Pune police about HRS’s FB page and urged them to take appropriate action and remove it. This page contains inflammatory posts and comments which can spark off tension between communities. It should immediately be knocked off the Internet.”

While suggesting to book HRS accused under stringent act of MCOCA he said, “Police have enough material to levy MCOCA on HRS”. He also said that police action varies with the community in hand as the cops were found to have acted quickly when it concerns minorities such as Muslims, Christians, and others.

“In these cases, they are eager to furnish data. I have asked the police to act with equal fervour when it comes to dealing with HRS. It is clearly an organisation which is acting against the Indian constitution, with their divisive strategies,” he concluded.