New Delhi: Delhi police special cell on Wednesday picked up a renowned Sufi Imam from Jamia Nagar area for what they claimed to be “questioning” in connection with one of his books.

Maulana Yaseen Akhtar Misbahi, who runs the prestigious Darul Kalam madrassa and is also the founder of the Qadri mosque, was picked up from the mosque’s office at Zakir Nagar in Jamia area at around 3 pm, locals said.

Almost touching 80, the veteran Barelvi teacher, could not even walk on his own and needs support. The police claimed to have picked him up for a recent English translation of his original Urdu book ’24 Ayat Ka Qurani Mafhoom’ – loosely translated as ‘The Real Meaning of 24 verses of Quran related to Jihad’. Among several of his book, Misbahi, who had been an Urdu journalist in the past, had also written ‘RSS Ke Agende’.

As soon as the people from the locality came to know about the incident, they started gathering at the Jamia Nagar police station. Congress’ Asif Mohammad Khan, the sitting MLA from the area, and Amanatullah Khan, the Aam Aadmi Party’s candidate select for the upcoming Delhi assembly elections, too reached there. The gathering of about 200 people started sloganeering demanding the SHO to apologise.

At around 7 pm, one of the police officials came out and announced that the Maulana was taken only for questioning and that he was returning only to be delayed because of traffic due to the crowd in front of the police station. He finally reached the area around 8 pm. Meanwhile, the SHO too had apologised to the people. 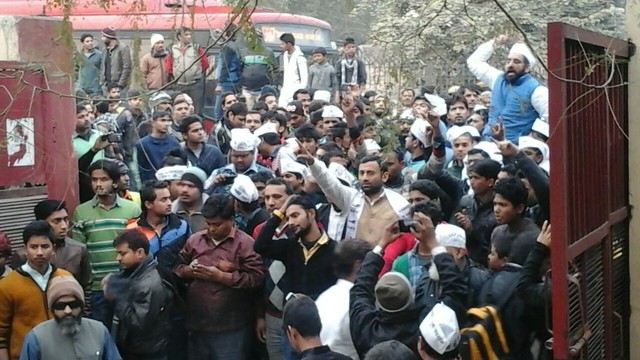 Amanatullah Khan claimed police had not followed any laid down procedure before picking up the Maulana.

The police have tightened security in view of the forthcoming visit of the US President Barak Obama next week and also ahead of the Delhi assembly elections on February 7. Ahead of the Lok Sabha elections in April – May 2014, two youth from the locality were similarly picked up. (Courtesy: http://twocircles.net/)