On June 13, I received an email from Thouseef Madikeri, a national secretary of the Students’ Islamic Organization (SIO) of India, with an invitation to the ‘International Conference on Communal Harmony & Nation Building’. Theconference that was scheduled for June 15-16 at Banaras Hindu University (BHU) was jointly organised by the University’s Political Science Department and the SIO. 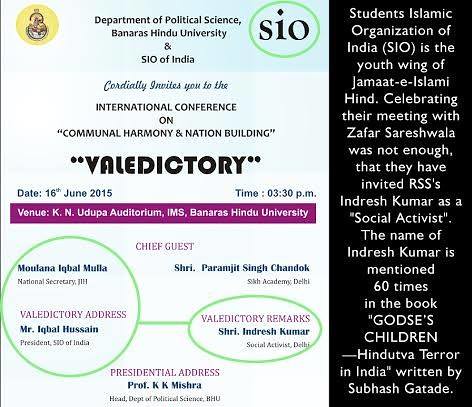 “The main objective of the conference is to help students to focus on Communal Harmony & Nation Building by giving them a better understanding of plural India,” read the invitation, adding “(The) conference will bring together theeducationists, religious leaders, students, youth leaders, teachers & other interest groups.” And “the conference sessions will focus on the role of individual in peace building, conflict resolution theory & comparative religion.”

Among the lesser-known names were one Maulana (Dr) Enayatullah Subhani of Uttar Pradesh, Rev Father Dr MD Thomas and Paramjit Singh Chandok of Sikh Academy, Delhi, apart from staff members of SIO and BHU. However, they were projected in a way as if they were the ‘who’s who’ ofthe peace and communalharmony discourse, movement and activism in India, if not, of the world.

But this was not the end of the story. There was one more name in the list of speakers mentioned in the invitation circulated by SIO of India: Indresh Kumar, to deliver the valedictory remarks.

However, giving them the benefit of doubt, I thought of seeking a clarification about him from the person who had sent me the invitation. Hence, I wrote an e-mail to Thouseef Madikeri seeking his response. This is what I wrote:

“I will be happy to know that I am mistaken and you have not invited the same Indresh Kumar as you have been telling our common friends (copied in this mail)…If that is the case, I would request you to share the profile and bio of Mr.Kumar. I am sure, you and your co-organiser must have done a background check before giving him such an important duty in you conference.”

Simultaneously, I also contacted many people who are and have been associated with SIO and its parent body, Jamaat e Islami Hind.Barring a few, no one replied to my mail or returned my call.
The response that I received next day (June 14) from Laeeq Ahmed Khan Aqil, national secretary (PR), Students Islamic Organisation of India (SIO) reads thus: “Indresh Kumar from Netherland, basically he is from Bombay, completededucation in Netherland, he was a professor at Netherland presently, stays in Delhi.”

With this response from a national secretary of SIO, I started another round of search for this Indresh Kumar from Netherland. But once again it didn’t fetch anything new, apart from the information that I already had. For a moment, I assumed that something could have been wrong with my way of searching and thus sought help from friends, who came up with the same information—“There is no other social activist Indresh Kumar” and, “Bhai, I could not find anything by the name of Indresh Kuamr from Netherland.”

Meanwhile, I received a call from a journalist friend who was aware of my earlier association with SIO. “Yesab kya ho raha hai, bhai?” he asked (Whatis this happening, brother?) I briefed him about my interaction and the information that I received from SIO. He further asked me to check with the BHU staff members because Professor Koushal Kishore Mishra, head of the Political ScienceDepartment and one of the conveners of the conference,had told journalist and editor of TwoCircles.net (Hindi), Siddhant Mohan thatthis Indresh Kumar was none other than the RSS Pracharak. And Siddhant had a recording of hisconversation with Professor Mishra.

To be on the safer side and to double check, I called on Professor Mishra’s mobile number and confirmed that this was the same Indresh Kumar,who had beeninvited. When I askedhim that people from the SIO were saying that this Indresh Kumar was a different person,who used to be based in Netherland, he said: “Haan bhai, inn Indresh ji ka bhi videsh mein kaam hai”(Yes, this Indresh also has work abroad).

It was only after all this that I decided to go public. But, before going public, I still sent another mail (on June 14) to SIO of India, informing them of my conversationwith Professor Mishra.

“And it’s official now. Contrary to #‎SIO‬ of India’s claims, according to Dr K K Mishra, HoD Pol Science, BHU, who is also one of the conveners of theconference, this Mr. #‎IndreshKumar‬ is none other than the same #‎RSSPracharak. ‬‬‬‬‬SIO of India, Shame on you for inviting Mr. Kumar and lying about it! (sic)”

This post broke hell for me. A barrage of abuses started coming in. Interestingly,though not surprisingly, this was no different from Sanghi trolls. Members,sympathizers and apologists of SIO and Jamaat started calling me Commie, opportunist, Dal-Badlu (since once I was part of SIO), Bakch**d, sold out, rumormonger and later, aasteen ke saanp, and insisted that I should apologize for my mistake. 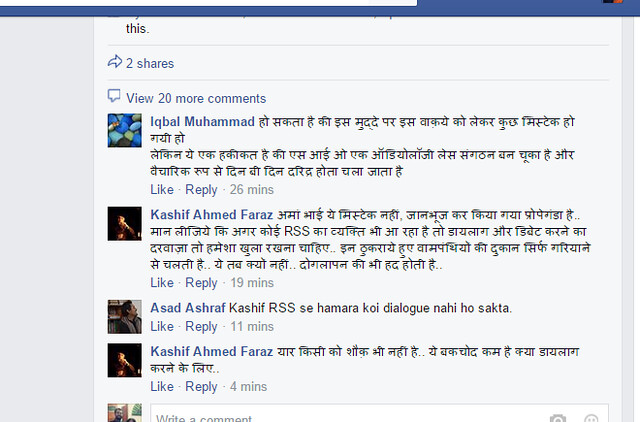 According to them, I was spreading rumor and misleading people, and indulging in defaming the organization. The basis of their claim about me layin a report inTwoCircles.net (English)– thatwas put up after my post – statingthat the person invited was a different Indresh Kumar. The TCN report read: “Indresh Kumar, invited in the programme, is not the same person, however. He is a “reputed academician who taught at the Vivekananda Academy, Netherlands”, the organisers told TCN, who after retirement “works on social harmony” and is based in Varanasi.

Speaking to TwoCirlces.net, Dr Koushal Kishore Mishra of the Political Science Department of BHU, termed the controversy unwarranted, adding that they have not invited Indresh Kumar of RSS, but a reputed professor, who works on social harmony.”

When contacted, the author of the report, M Reyaz said that he was informed by both the organisers that this Indresh Kumar was from Netherlands, and hadhence incorporated their version. He said he also mentioning (in his report) that I had mocked publically about the event.I said to myself, fair enough. It was quitesimple. I wrote what I was told and he wrote what he was told. However, he addedthat, “even I could not find a single information about this Indresh Kumar of Netherland fame.”So, all the claims that I had not contacted the SIO were nothing but plain falsehood.

Abuses and name calling kept pouring on my FB wall and in my inbox. Not only me, but who so ever tried making a point was calleda stooge of the Left andequally abused. Some even hinted that I was being a Congress stooge. They alsoclaimed that I was just being arrogant and trying to settle some old score or that I had some personal agenda.

This precisely reminded me of a campaign that some of us had launched when Jagdish Tytler was being awarded the Maulana Mohammed Ali Jauhar Award. Back then, we were called BJP’s stooges and that we were doing this for somepersonal reasons.

Interestingly, like in the previous instance, the case was the other way around. In this case, Maulana (Dr) Enayatullah Subhani, father of Abubakr Sabbaq(who was in fore front of hurlingabuses and justifying SIO’s move)was one of the lead speakers at the conference. Once again, I was reminded of an oldsong, “Choron ko saare nazar aate hain chor”… A thief sees everyone else as a thief too.

What was even more interesting is thatAbubakr Sabbaq, who is an advocate and claims to be associated with human rights work, kept bashing secularism, democracy, the Left and the civil society organizations. He went on to claim that the BJP was much better than the Congress.

Following is a sample of his argument: 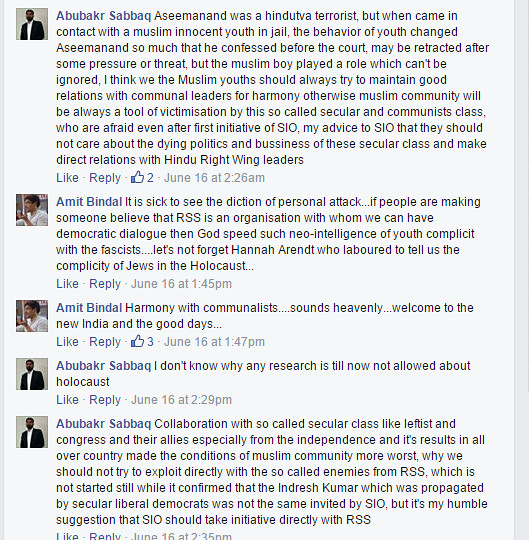 You must by now be wondering what had finally happened to the Indresh Kumar of Netherland fame?Did he turn up? The answer is a big NO.

Even the organizers kept completely mum about him after the programme. Why? According to a report by the TwoCircles.net Hindi editor, Thouseef of SIOtold him that, “He was not going to attend it anyway and we came to know two daysago that he had declined to come.”

But when he asked them why this was not informed to the participants, he was told that they had forgotten to inform them!Here is the must read story in Hindi on the entire fiasco, written by Siddhant. SIO और BHU के बीच लटकती साम्प्रदायिक सौहार्द्र की हक़ीक़त

Coming to the end, I must confess that I was not going to apologise in any case. Because, whatever I had said on the issue was based on facts. On the other hand,the SIO is yet to come clean about this other Indresh Kumar. Once again, I asked the organisers to share the details (contact number, email id, CV, some of writings since he was said to be a professor) about this Indresh Kumar of Netherland fame. I am not being sarcastic, but I would love to meet him personally, given his commitment to peace and communal harmony.

Oh, but Wait. There is an anti-climax as well.

While Indresh Kumar of Netherlands fame did not turn up at the conference,BJP UP state president Lakshmikant Bajpai was present at the event as the chief guest and he spoke at length even though his name was not mentioned anywhere on the invitation.

One may ask about his contribution for the promotion of communal harmony and peace building. Here is a sample of his efforts when victims of Muzaffarnagar violence were crying for justice : “In our state, 71 of 100 crimes are against women,” Bajpai said. “It is shocking but true that 99.99% of the accused in these crimes are Muslims. The UP government is defending ‘love jehadis’ while victims are murdered or harassed by the police. The BJP aims tostop this and save the country,” the BJP leader had said at the conference, which was convened to gear up the party for the challenge of UP elections.

On the same day of his lecture at the BHU conference, he was reported to have famously said that “Not Yogis but Ulema stink”.

(Mahtab Alam is a Delhi-based activist and blogs at mahtabnama.wordpress.com. You can chase him @MahtabNama)