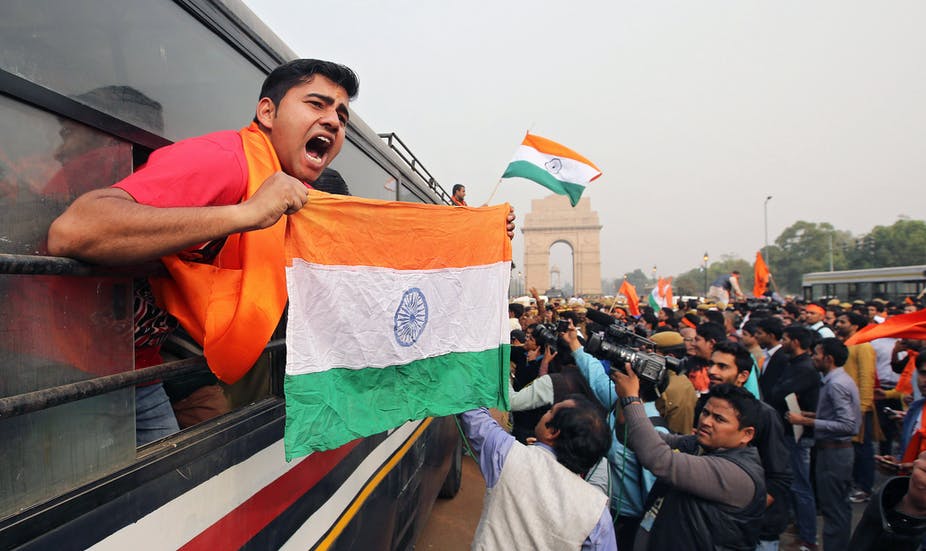 Nationalism per se means identification with one’s nation and support for its interests, especially to the exclusion or detriment of the interests of other nations.

Nationalism is an idea that promotes the interests of a particular nation especially to gain and maintain its sovereignty over its homeland. It also promotes patriotism and encourages them to take pride in national achievements.  It is a sense of national consciousness exalting one nation above all others. (Webster)

Nationalism can also be used as a tool to generate “false” pride in the actions of a government if people are not equipped to analyze these actions critically. Therefore, national governments must educate their citizens so that they can take part in the process of identification of national interests and make an objective evaluation of national achievements. It will promote political, social, and economic equality, and strengthen the national sovereignty. A rationalist and democratic nationalism will strengthen the nation, which can not only take pride in its achievement but can also ensure the welfare of its citizens. This can be described as “should be” nationalism.

Nationalism may look like a universal concept in theory but it evolves within the local political, social, economic, and historical conditions of those nation-states, hence results in an array of nationalism in practice. On the one hand, we have seen the Nationalism of Germany, Italy in the past that were overt, politically brutal and full of autocracy and rested upon war and bloodshed, while on another hand, Japanese nationalism has resulted in rapid economic and scientific development after the world war-II, which has helped Japan to become a major economic power just after few years of devastation.

Similarly, Cuban and Vietnamese nationalism has built a socially, economically, and politically equitable and ecologically sustainable society under the guards of nationalism.

In addition to these, there are other versions of nationalism where it has been mixed with a political ideology like China, and religion like Saudi Arab, to promote particular political interests.  Therefore, the actual form of nationalism is contextual and it can be described as “existed Nationalism”.

Social and political equality, economic well-being, elimination of poverty, end of social discrimination, and protection from social and political atrocities were the key values of pre-independence nationalism. Therefore, it was natural that all of these values have found a place in the Indian Constitution, and following national governments under the new constitution supposes to frame and implement policies that can achieve these goals.

After independence, it was the responsibility of successive governments and people to work towards aforesaid goals through holistic social and economic development, citizen-oriented policies, and ensuring social and political justice without discrimination. The notion of nationalism based on equality, justice, and economic progress would have resulted in the organic strengthening of the nation and it would have earned an important place in the comity of nations.

Therefore, governments after independence have adopted policies that have ensured not only rapid economic growth but also distributed the benefit of economic growth through welfare policies. This was an effort to undo the perils of colonial rule, eliminate hunger and poverty, and end of social and political discrimination.

Nationalism has remained enacted within the values and promises of the national movement in initial years after independence, however, this has started changing with fading away of memories of freedom struggle.  The political landscape has started changing from the mid-’80s due to fading away of memories about the values and objectives of the freedom movement, which has created space for entry of alternative political ideas.

These alternative political ideologies have got new life and space in mainstream politics due to rampant corruption and autocratic behavior of the government. Hence, a struggle between multiple political ideas was obvious, which should have strengthened the democracy, but it also shaped the political landscape of the country in new directions. One of the benefactors of this chaos was RSS led group of organizations which has started propagating the idea of “cultural nationalism” or “Sanskratik Rashtravad”.

This idea was not new and has been coined in response to Indian National Congress’s version of nationalism, but it has started gaining momentum in mainstream politics in the 1980s, as RSS’s political arm Bharatiya Jana Sangh later Bharatiya Janata Party has come to power in many states and got control of central government at few occasions. However, this idea of cultural nationalism soon became religious nationalism with the consent of RSS and at large Sangh Pariwar, about which we will discuss in the following sections. Hence, we can say that changes in the political landscape and fading memories of freedom struggle has not only diluted but also changed the color and shape of nationalism.

Since and after mid 80’s we have another version of nationalism which existed since 30’s but their overt presence was felt once their political wing Jana Sangh and BJP have rode into power. These parties have become electorally powerful as congress led governments to continue to move away from the goals of the constitution, which has weakened the idea of nationalism enshrined during the freedom movement. The RSS version of nationalism, which they call “cultural nationalism” is a revisionist idea.  It takes pride in Indian culture and period before Mughals.

By the very conception, cultural nationalism has mixed the Hindu religion and generated political capital for majoritarian governance. They opposed the corruption and hegemony of one political family and put forth Sanskritik Rastravad as a panacea for all problems which the nation is facing. They are strongly inclined and mixed religion with nationalism and limited its scope to security, war, and glorifying the nation based on the glorious past without addressing the concerns of the present and forgets to recreate the glorious present upon which people can take pride and feel nationalism as defined above. They have been successful to the large extent in generating emotive appeals but it does not say much about the socio-economic goals of the constitution, democratic rights, and overall development of people in all respect.

This political and religious nationalism ensured a sense of glory to some without actual social, political, and economic development. This religious nationalism has ensured the support of the mass through some of the landmark milestones in its political journey like Ram Mandir Movement (which was no doubt part of the existence of majoritarian Hindu community), strong stand in respect of border security issues, good performance in big infrastructure projects especially in the road sector, removal of article 370 wherein almost every Indian felt proud, opposition to Pakistan and terrorism, military strikes against insurgents, Kargil War, Nuclear Missile testing, propagation of Indian lifestyle, ethos and good practices of ancient India.

On the other hand, other political parties like Congress, Left, and numerous religious parties have provided a conducive environment for the flourishing of BJP and RSS led religious nationalism due to multiple reasons. Congress has become a dynastic party where one particular family is at the helm of affairs for a long time and power gets transferred across the generations. BJP points out this as it gives a chance to BJP to present itself as democratic with strong nationalist value while congress as a dynastic organization that is weakening democratic values. The left parties failed to move beyond its traditional pockets and making a pan Indian appeal. One of the key reasons behind the left’s failure is it seems to be more interested in the academic propagation of its ideology than actual translation into equality with strong economic development. Adding to its woes, people are disenchanted with the corrupt and dynastic regional parties which are ruling different parts of the country for almost 30 years. Hence, people are taking refuge with the BJP which claims to provide better governance than these parties. This has led to a situation of “there is no alternative (TINA)”, which is a golden opportunity to feed the religious nationalism into the minds and hearts of the people at large without mixing the socio-economic development.

Why there is a need of Affirmative Nationalism

People have got attracted to religious nationalism due to its emotive appeal of glorious past but it has failed to address daily issues such as unemployment, poverty, health, education, and livelihoods. People cannot keep eulogizing past for a long time if their present lifestyle is deteriorating.

Therefore, a strong feeling of disenchantment is growing especially among those who work for strengthening of nationalistic values which were enshrined in the pre-independence conception of nationalism. Before independence, be it Gandhi or Bhagat Singh, Bal Gangadhar Tilak or Jawaharlal Nehru, or even other leaders, they all were the same in the sense of nationalism, where the welfare of people is most important aspect of nationalism. They all fought against British Rule not only political independence but also to ensure Roti Kapda Makan and social justice.

Now the affirmative Nationalism takes its cues from the original conception of nationalistic thought and unionize scientific temper, economic development, and republican values with ancient Indian ethics and culture. This version of nationalism will aspire for revival and preservation of Indian ancient thought, Yoga, Ayurveda, and other practices after analyzing them critically and understanding their relevance in the modern world.

On the other hand, it will also promote the development of scientific temper in masses, elimination of poverty, social and economic equality, end of social discrimination, and ensuring necessities of life to everyone. In nutshell, people-oriented development is at the pivotal of affirmative nationalism rather than bare glorification of the past without any meaningful achievements for the people.

Affirmative Nationalism does not believe that reply to every issue and problem is religious fervor or a sense of security of borders or toughness against terrorism only. The economic issues and social issues should be addressed properly within the idea of nationalism and otherwise, nationalism becomes a political tool to get an opportunity to govern without fulfilling the dreams and desires of masses.

One of the reasons for fading the pre-independence conception of nationalism was the failure of a successive government to improve the lifestyle of masses and elimination of poverty. It has allowed majoritarian parties to exploit the situation. The new alternative political experiments like Aam Aadmi Party are a welcome step in the direction of affirmative nationalism. These efforts are focused on providing quality education to all through government schools, ensuring the provision of quality healthcare through Mohalla Clinics, and building a job-oriented economy. A true nationalism can be imparted in younger masses through affirmative welfare measures, which will help to reject majoritarian religious nationalism in the name of cultural nationalism.

The tasks under Affirmative Nationalism

The first and foremost task under affirmative nationalism is to correct the notion of nationalism and imbibe the lofty goals of the social welfare state as enshrined in the Indian constitution. This can be achieved only by educating people about nationalism, its process of conception, and what does it mean in the modern world.

It is essential to educate our younger generations politically, so that they do not ascribe to distorted and hollowed versions of nationalism and can identify the thin line between majoritarian politics and nationalism.

Secondly, it should put socio-economic development at the center-stage of electoral politics and should aspire for the elimination of majoritarian politics.

Thirdly, it should aspire for preservation and revival of ancient practices critically, but should also ensure that these practices do not become refuge to anyone.

Fourthly, it should promote a consensus-based security and foreign policy and a healthy debate around these issues.

Lastly, it should continue evolving by learning from good practices across the world but it should always take its inspiration from the Indian constitution and freedom struggle. (Views are personal)