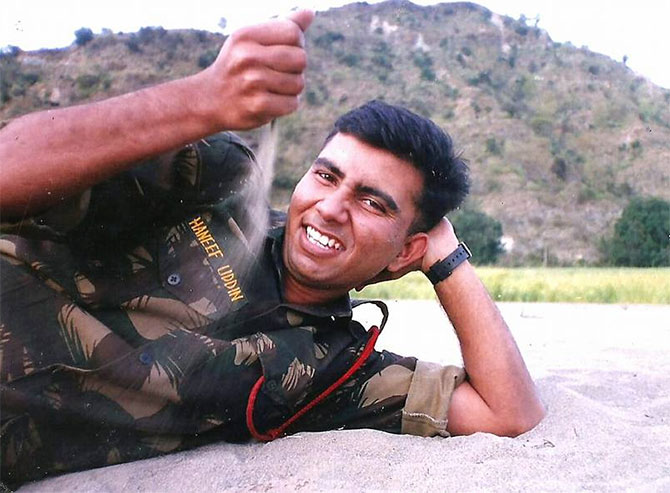 Pakistan’s misadventure in Kargil will be remembered not only for the convincing win of the brave Indian army but also for some of the heroes who sacrificed their lives for our dear motherland. Prominent among those heroes was a 25-year young Captain Haneefuddin of 11 Rajputana Rifles who led from the front and made the ultimate sacrifice. Martyr Vir Chakra Captain Haneefuddin had to be from the Dilwalon ki Dilli! Truly, he had a large heart for he volunteered to command an operation to capture a post which would give a vantage position to observe the enemy’s movements.

It was quite early days of Kargil war when there was hardly any information available about the enemy troops. A company of 11 Rajputana Rifles was deployed in Operation Thunderbolt on June 6th, 1999 led by Captain Haneefuddin. It was at an altitude of 18,000 feet in the Turtuk region. The Mission: To capture a position in the region which would facilitate the Indian army to monitor the movements of the enemy troops better. The capture of this position would give the troops a strategic advantage in those early stages of the war. Captain Haneef volunteered for this Operation Thunderbolt as it was his ingrained in his nature to lead from the front. He set off for the vital operation with one junior commissioned officer and three other ranks. They made significant strides on the nights of 4th and 5th June 1999. They captured nearby positions. They captured the adjacent position and set out their advance on 6th June 1999 to capture the position they desired. They were undaunted by an altitude of 18,500 feet and extremely cold temperatures. They were however spotted by the enemy and fired upon. A firefight followed, against an enemy equipped with heavy artillery.

Captain Haneefuddin was concerned about the safety of his team more than himself. He took up a position and fearlessly showered bullets on the enemy. In the exchange of bullets, he was severely injured. But he kept engaging the cunning enemy, until his boys were safe from the enemy fire. Unfortunately, he ran out of ammunition and he was shot from all directions. He succumbed to his injuries, just 200 meters from the position they valiantly set out to capture. He displayed extraordinary valor in the face of the enemy and cared more about his team’s safety than his own. Captain Haneefuddin attained martyrdom at the young age of 25. It was exactly two years after he was commissioned in the army. But his body could not be retrieved due to heavy firing till a brave Colonel Bhatia and his illustrious team set out to retrieve the body. It was on 18th  July, 43 days after Haneef’s martyrdom, Captain S K Dhiman, Major Sanjay Vishwas Rao, Lieutenant Ashish Bhalla, Havaldar Surinder and Rifleman Dharam Vir volunteered for the task.

Col. Bhatia and his team carefully negotiated the deadly precipices. The team managed to locate the brave heroes Haneef and Parvesh. They extricated the frozen bodies. Dragging them behind the boulders, the team carried the fallen heroes on their backs. They walk quietly through the night, reaching Zangpal by early morning. A helicopter carried the bodies away as the brave Colonel Bhatia watched the body bags with moist eyes for one last time.

Vir Chakra Captain Haneefuddin’s mother Hema Aziz had paid tribute to her martyr son thus:  “As a soldier, Capt Haneef served his country with pride and dedication. “There cannot be a greater statement on his valor than his death which came while fighting the enemy.” Later, a subsector in the battle zone was named as Subsector Captain Haneefuddin.

It is interesting to note that Captain Haneefuddin had gone to fight for 11 Rajputana Rifles whose war cry is ‘Raja Ram Chandra ki Jai’. Twenty years later, in February 2020, in Captain Haneefuddin’s hometown – Delhi, a similar war cry —  Jai Sri Ram was used by the rioters who looted, raped, killed innocents, destroyed 11 mosques and burnt down the copies of the Holy Quran, according to the just released report of the Delhi Minorities Commission. Those who carried out this pogram do not have guts to go to the borders and fight the enemies Pakistan and China. Instead, they choose our own citizens!

Where have the Dilwallas disappeared from Dilli?  Lest we forget Kargil War Hero Vir Chakra Captain Haneefuddin and other heroes!