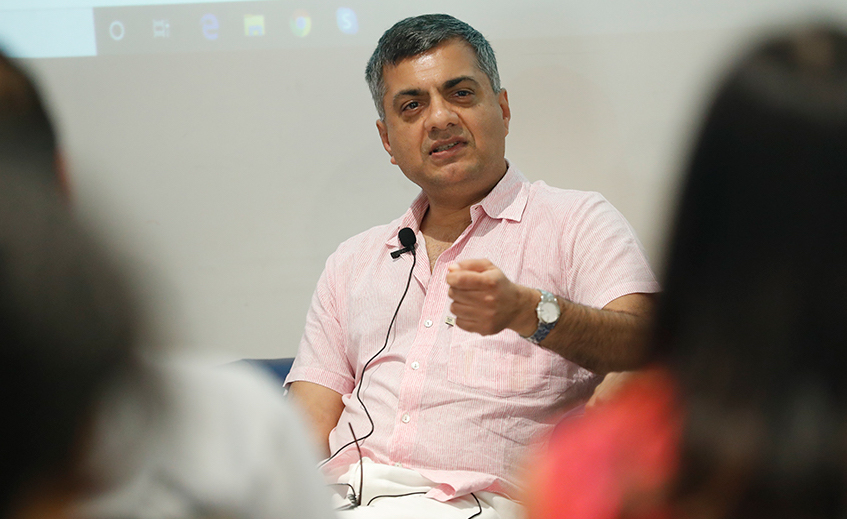 Aligarh: “Mahatma Gandhi’s ideas influence both who admire him and those who do not. His opponents continue to depend upon Gandhian terms and procedures, such as fasts, marches, and satyagraha or truth-force,” said esteemed historian, Prof Faisal Devji who teaches at the University of Oxford.

He was delivering a web talk on ‘Gandhi’s Silence’, the second in the series of lectures on ‘Thought and Philosophy of Mahatma Gandhi’ organised by the Aligarh Muslim University (AMU) to commemorate the 150th birth anniversary of Mahatma Gandhi.

Prof Devji pointed through a meaningful silence; Gandhi could touch the forms of speech- thought, feeling, and awareness that were often drowned out through other forms of speech.

He added: “Gandhi became uncompromising in keeping his weekly day of silence. The entire world became aware that it was on Monday. The peace gained from the silence-day used to comfort him a lot and he used to finish the week’s pending work on that day.”

“Gandhi believed that the safekeeping of cows was one of the most wonderful phenomena in human evolution as it takes the human being beyond this species. The cow to him meant the entire sub-human world,” emphasised Prof Devji.

He elaborated that Gandhi spoke frequently about humanity and humanitarianism and considered the effort to address mankind as a whole fundamentally violent, and often described it as a sin.

This was because man’s universality could only become manifest by destroying the social particularities that both obscured and made it possible, Prof Devji pointed out.

He further said that Gandhi distanced himself from the law profession, but its influence continued on him.

“Gandhi was critical of the legal profession, especially in a colonial society, because he saw it as legitimising and easing the way for brute force. Lawyers, he thought, made their clients depend upon an illegitimate state by making it a neutral third party, it’s very foreignness allowing it to decide disputes among Indians,” said Prof Devji.

He added that Gandhi saw people in his country unable to relate to one another without the mediation of this state, upon which they had come to depend as divided interests.

“In criticising the law, Gandhi was, therefore, seeking to make direct relations possible once again among Indians and so break down their character as opposing interests. But of course, Gandhi didn’t want to destroy law altogether, only to limit its reach in Indian society, which he worried was far too litigious and so intolerant of difference,” said Prof Devji pointing out that Gandhi often placed categories of law in quite novel contexts, as when he insisted on pairing rights with duties and so limiting the reach of one by the other.

Delivering the presidential remarks, AMU Vice-Chancellor, Professor Tariq Mansoor said the participants of the web talk have been enriched by Prof Devji’s lecture.

He added that people all around the world, remember India with Mahatma Gandhi and his teachings and thoughts are more required today than ever.

Speaking on Gandhi’s day of silence, the Vice-Chancellor said, “Gandhiji observed silence on every Monday. He won’t talk to anybody on that day. He would not break this rule for any reason except in cases of unbearable physical pain or to comfort people in mental duress.”

Gandhiji spoke less and acted more, said the Vice-Chancellor further quoting Prophet Muhammad and some distinguished philosophers on the importance of good speech and maintaining silence.

Prof M Abdus Salam delivered the welcome address and conducted the programme, while Prof Naima Khatoon extended the vote of thanks.