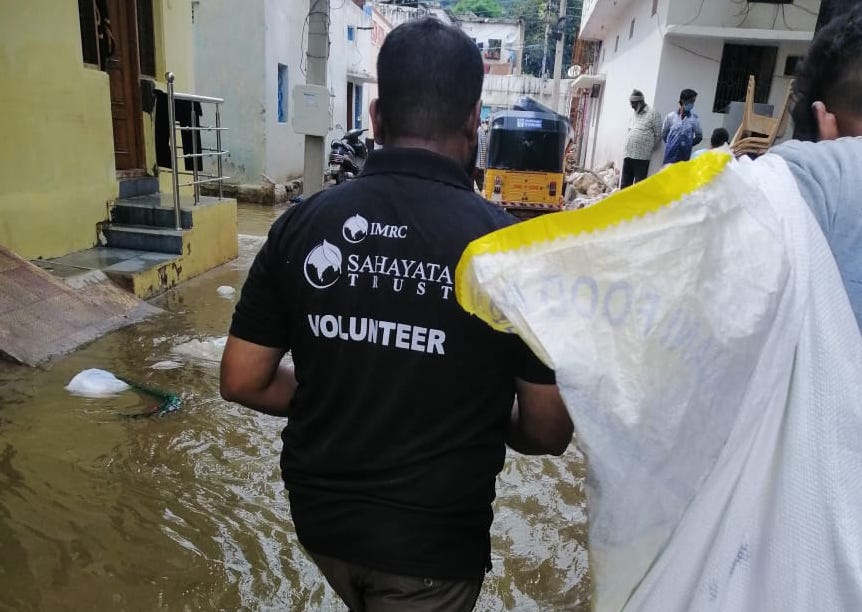 Hyderabad: The worst floods in a century in Hyderabad has ravaged the lives of hundreds of thousands of people and caused property damage worth Rs 5000 core according to preliminary estimates.

Despite the fact that certain sections of media leave no stone unturned to vilify the Muslim community, they have stood up for the cause of relief work to sustain and rebuild the lives of those who have been ravaged by the unprecedented floods that left at least 50 persons dead in Telangana.

The US-based Indian Muslim Relief and Charities (IMRC) is coming to the rescue of hundreds flood-affected people in the city to restart their livelihoods with charity plans worth Rs 1.5 crore.

At the aftermath of the floods, the charity organization has been carrying out relief and rescue work across the city of nawabs with sister organization Sahayata Trust.

As relief measures, the group of volunteers from Sahayata Trust has been distributing clothes, blanket, food, medical assistance, apart from arranging shelter for the victims of the deadly floods following the torrential rains.

As part of its relief work, IMRC also has planned detailed community-level intervention to support the lives of poor and marginalized families whose source of income has been wiped out by the deluge.

The IMRC has started supporting families with ration and it will support at least 1000 families in the city. The members of the Sahayata Trust said that they will initiate programs to rebuild houses, repair cab and autos and support those who used run small grocery shops in various localities.

To provide medical assistance to the injured during the floods and those who might fall sick after the water recedes, the IMRC along with Indo-US Hospital, located at Malakpet area, have made arrangements for free treatment, the members of the trust said.

The group has been actively working for support the flood-affected people at various places including Jalpally, Venkatapur, Osman Nagar, Habeen Nagar, Khairatabad, and Faluknama among other localities.

The India Meteorological Department (IDM) Telangana had forecasted heavy rains at isolated places in the state till October 22. Before this, the downpour on Saturday night for six to seven hours, measuring close to 20cm of rainfall, caused the second wave of floods in the city. The city has been reeling under savage floods since October 14 following torrential rains caused by a “deep depression” formed after a low-pressure system developed in the North Andaman Sea on October 9.

IMRC has been committed to the cause of relief and rehabilitation works following various natural disasters across India. During the colossal Bihar floods in 2016 and subsequent floods, IMRC assisted more than 3,030 flood-affected families with ration.

The charity organization has also been involved in various education, health initiatives, skill development centers, and other livelihood support projects across India.