The historic city of Hyderabad is no more shining with its pearls. It is stinking from the odour of the people and animals washed away in the unprecedented rains. About 20 people perished in the watery grave as it rained camels and elephants for 8 hours continuously this week. Luckily, Hyderabad survived! New York would not have survived the intensity of such rains. Tanks, lakes, and storm water drains breached to send water neck-deep into homes. Al Jubail Colony, Yashrab Nagar, Nadeem Colony, Rasoolpura, Ramanthapur, Mohammedia Hills, Bandlaguda, Babanagar, Kamalnagar, M. S Maqta, Prakash Nagar, and Balapur are the worst affected and beyond recognition! More than 145 colonies continue to be inundated even after three days. Thanks to the rescue efforts of the Indian Army and the NDRF, many people were moved in boats to safer places and shelters. Municipal workers are working to unclog the drains. Hundreds of houses were totally destroyed and many thousands of houses suffered extensive damage. One Taher Qureshi’s 8 family members were washed away in swirling waters before his eyes in a matter of seconds!

There is no use blaming the weather! A bad workman quarrels with his tools. Successive governments of different parties turned Hyderabad into a big slum by allowing illegal constructions and encroachments on the River Musi’s bed and the banks of the tanks and the lakes with impunity for the purpose of vote banks. Even the present TRS Government in Telangana has done little to extricate Hyderabad from the mess. Storm water drains are not desilted regularly by the GHMC. The drains are clogged with plastic. Where will the rain water go then? The drainage system is in shambles. 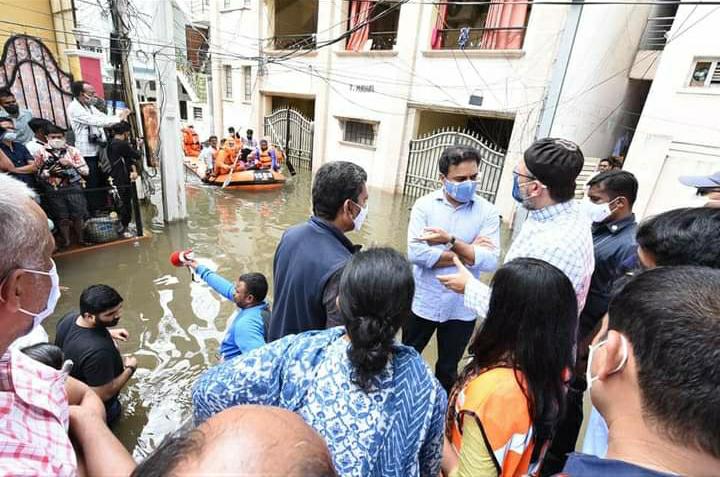 It is a fact that the human tongue does not have a bone! This small lump of flesh has been used by our politicians to promise the moon to the gullible masses to fill their coffers till their last breath. The promised Rs 15 lakhs to every citizen of the country turned out to be a ‘jumla’ enticed by the magician of lies in Delhi. Hyderabad was promised to be developed into Istanbul – a city in Turkey by none other than KCR! Two villagers – K. Chandrasekhar Rao (KCR) and his son K. Tarak Rama Rao (KTR) migrated to the city and sold dreams to the gullible Hyderabadis that they will develop Hyderabad into a world-class city like Istanbul. In the last elections to the Greater Hyderabad Municipal Corporation (GHMC), whose term expires in two months from now, KCR-KTR led Telangana Rashtra Samithi (TRS) walked away with an unprecedented 99 seats out of 150 seats. All India Majlis Ittehadul Muslimeen (AIMIM) Floor Leader in the Telangana Legislative Assembly Akbaruddin Owaisi, though an alliance partner of TRS, went hammer and tongs at the TRS Government during the recently concluded Assembly session inviting a sharp rebuke from KCR himself. Akbaruddin walked out of the Assembly. He daringly questioned as to what happened to the ‘Istanbul’ promise? He asked as to why funds were not released for Hyderabad’s development, particularly, for the neglected old quarters of Hyderabad?

It is significant to note that in the Dabeerpura municipal ward, a storm water drain covering work was not completed even in 10 months. The Municipal Administration Secretary Arvind Kumar, IAS, had to personally inspect the place and get things moving. A similar case happened in Kala Pather ward. On the other hand, the conservative and superstitious TRS Government allegedly for Vaastu got the strong Secretariat buildings dismantled and allotted about Rs 500 Crores just a couple of months ago. The handling of Cornona situation has been a matter of concern. The Telangana High Court reprimanded the KCR Government for presenting ‘incorrect’ or ‘fudged’ figures.

The Election Commission and the Telangana Government should see to it that ‘civil contractors’ should be debarred from contesting the GHMC elections. Many of the corporators or their spouses are civil contractors. They get the civil works passed in the standing committee. The quality of work is there for all to see. Sometimes, the work carried out is only on paper! The High Court must question the Telangana Government as to why the regular desilting and cleaning of lakes were not carried out efficiently and regularly. The court should consider capital punishment for those people dumping construction debris into lakes and takes. Cameras can be installed near the lakes and tanks to catch the culprits. The court should take a categorical assurance from KCR Government that sufficient funds will be released to rebuild Hyderabad.

About the Hyderabad Municipal Corporation there is a saying:

No file (especially for building construction) moves in the GHMC unless palms are allegedly greased, even if all the paper work is in order. The share of the spoils is allegedly enjoyed by officials from top to bottom. Those who do not grease the palms are allegedly harassed. The work is delayed. The usual response will be – Saab nai hai file pe sign karne. Tum parsun aao!  The word ‘Parsun’ in Hyderabadi parlance does not mean the day after tomorrow. It could mean six months to one year!

The Municipal administration Minister KTR, the double post-graduate’s energies are spent on foreign tours to South Korea, Japan, Switzerland, the United Arab Emirates (UAE) and other countries to attract ‘investment.’ These days he is touring the devasted parts of the Hyderabad to see for himself the results of Hyderabad’s neglect during the past 6 years of the TRS government. No wonder, the Bharatiya Janata Party (BJP)’s national Mahila Morcha president D K Aruna has demanded KTR’s resignation. Home Minister Mahmood Ali who hails from Azampura in the old city cannot open his mouth and demand funds from KCR. He is a big liability.

Hyderabad Lok Sabha member Asaduddin Owasi along with his brother Akberuddin Owaisi and other legislators are seen trying to negotiate and instill a sense of responsibility into the deaf and dumb TRS Government to provide relief to the displaced people and to rescue those still trapped in their inundated houses.

It was raining heavily at the time of filing this report. It is the second round which is expected to continue until 21st October 2020, according to weather predictions. It remains to be seen how much funds are released for Hyderabad and Telangana’s flood-affected districts by Prime Minister Narendra Modi. Urgent generous funds are needed from the Urban Renewal Fund. Hopefully, Sab ka Saath, Sab ka Vikaas is for Hyderabad and ‘Golden’ Telangana too!