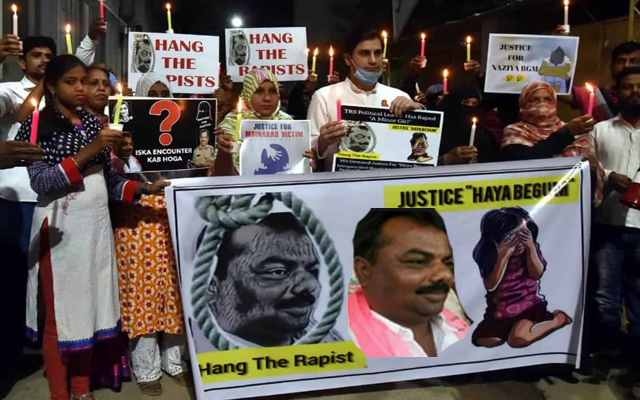 Moinabad – a sleepy town near Hyderabad woke up to shocking news of a domestic worker *Haya Begum (name changed) allegedly committing suicide at her employer and the Telangana Rashtra Samithi (TRS) leader Madhu Yadav’s residence last week. The accused was arrested and he is cooling his heels in judicial remand. He is booked for ‘outraging the modesty of a woman’, which was later changed to rape and for abetment to suicide.  Home Minister Mohammed Mahmood Ali has condemned the shameful act but he denied that Madhu has any connection with the TRS. Neither the Chief Minister K. Chandrasekhar Rao (KCR) nor his son and TRS working president K. T Rama Rao (KTR) have said anything. This is a strange behavior and discrimination considering the fact that some ministers were sent by KCR to veterinarian Disha’s house after her alleged rape and murder and huge compensation was announced for Disha’s family. The accused were even eliminated by the Telangana Police. Poor Haya Begum has been given a raw deal.

The collective conscience of the people suffers from selective amnesia. They feel the pain of rape and murder only when the victims happen to be a Nirbhaya or a Disha. Though there were rallies and protests demanding justice for Haya in the districts of Telangana, the majority of the people belonged only to the deprived and marginalized sections of the people. The elite feminists and the affluent class were missing from the huge rallies. Women’s organizations seem to be weighing the pros and cons of joining the justice chorus for the poor Haya Begum. Will Haya’s poor family be able to afford the monetary, the mental, and the legal trauma and bring Madhu Yadav to justice? Will Haya’s sister’s statements and evidence be accepted in the court?

One does not know if enough forensic evidence including the clothes of Madhu Yadav and Haya Begum were collected or not? If the case is watered down, it is very likely that Madhu Yadav may get the ‘benefit of doubt’ and go scot-free as in some other cases of similar nature.

Why not KCR and KTR also visit Haya Begum’s kin to console them? Why is no compensation offered and released by the Telangana State government? Whether it is Disha or Haya, both are victims of misogynistic beasts. There should be no discrimination!