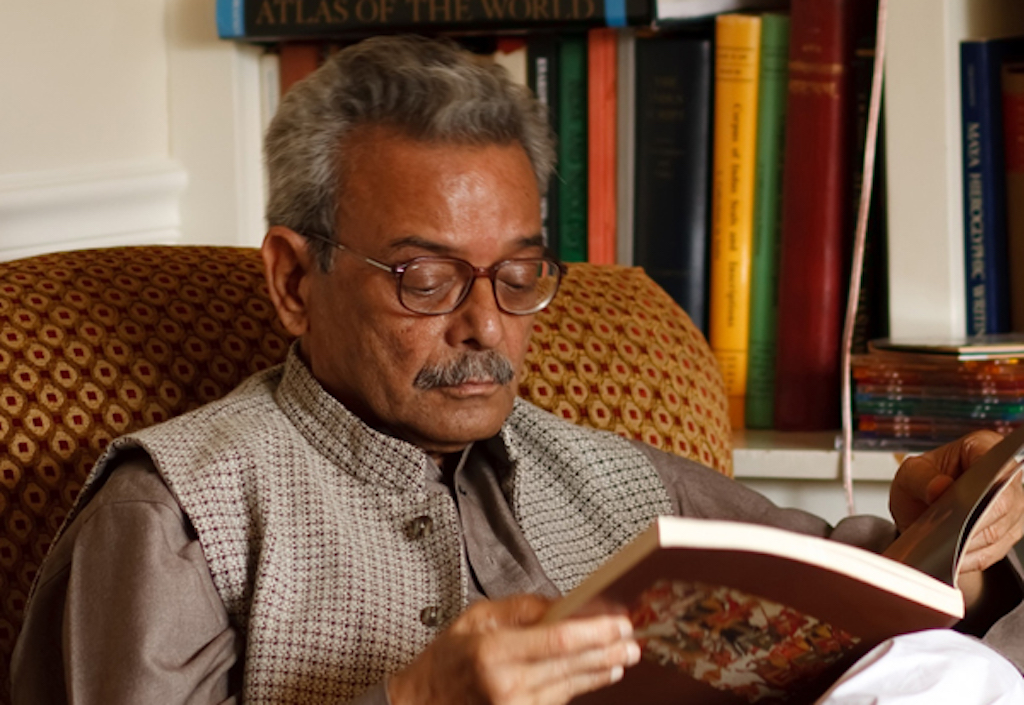 Jamia Millia Islamia is a prodigious place. It has transformed many ordinary minds into visionary resources. This is the place that broadened my worldview. I met many aces who are landmark of their arena and made themselves tall in their respective fields of honor. One of such celebrated thought leaders I met In Jamia, was the former IAS officer and a scholastic name of literature Mr. Shamsur Rahman Farooqui. With his simple appearance and banausic gesture, in the first meeting, no one could’ve conjectured that he is the kind of a person who has a broader impact on Urdu literature as a poet, as a novelist, as a theorist, as a short story writer, as a poet and so on.

Orhan Pamuk, a Turkish novelist and a Nobel laureate once said about Mr. Shamsur Rahman Farooqui’s one of the novels The Mirror of Beauty ‘an erudite, amazing historical novel’. He has written numerous scholastic, milestone books and he has received equally numerous honors. Almost all literary academies in India have awarded him for his excellence and his publications. Saraswati Samman and Padmashri like prestigious awards are among them which were conferred to Shamsur Rahman Farooqui. His more than forty publications are books of reference and a part of the syllabus in almost all departments of Urdu wherever it is, in more than five hundred universities in the world.

I was fortunate enough to listen to his many scholastic speeches in Jamia Millia Islamia and interacted with him about many literary issues. Shabkhoon, the kind of a literary magazine without that the history of Urdu literature can’t be imagined. The magazine kept on publishing under his oversight, for forty years, every month without fail. Almost all the tall personalities of Urdu literature of twentieth-century published this magazine until it was officially stopped in 2005.

His books cover the verity of topics he penned on Manto, “Hamare Liye Manto Saheb”, he wrote on Ghalib “Ghalib per chaar tahreeren”, and “Tafheem-e-Ghalib”, (both the books published by Ghalib Institute New Delhi), he wrote on Iqbal as well  “Khursheed ka saamaan-e-safar”, his writings on Mir Taqi mir is an epic in three volumes “Sher Shor Angez”, his book on Mir is also a landmark in Hindi and very popular among Hindi readers “Mir ki kavita aur Bhartiya Saundaryabodh” published by Bharatiya Gnanpeeth in 2014, his book on Akbar Ilahabadi is also remarkable in Akbar studies, “Akbar Ilahabadi: Nayi tahzibi Siyasat aur badaltey huye Aqdar. Afsaney ki Himayat mein, Sher, Ghair Sher aur nasr, Isbaat o Nafi, Tanqidi Afkar, Tabeer ki Sharah, are the significant books among his many highly acclaimed publications. His books are gems of Urdu literature. He has covered almost all widely discussed topics of the Urdu literature.

Although, he has coined a few ideas in the Urdu literature that caused controversy and this kerfuffle also brought some positive vibes and became a hot potato of literature. He was among the few noted scholars who introduced the theory of modernism to Urdu. A new argument began with this doctrine. Afterward, Prof. Gopichand Narang brought the idea of post-modernism, and then a new tussle and scuffle started. A few writers supported the idea of modernism supported by Farooqui and a few scholars, on the other hand, supported the post-modern theory introduced by Prof. Narang. This tussle contributed a lot to Urdu and was the spectacular reason for dynamism in the Urdu criticism.

Let’s talk about Shamsur Rahman Farooqui’s early life. He was lured by Urdu fiction first as he calls Urdu fiction his first love in one of his interviews by Dawn Karachi. Mr. Farooqui claims in this interview that he wrote his first short novel when he was 15. He was interviewed by one of the tallest Urdu critics Asif Farrukhi, on September 15, 2013. It is worth mentioning here what he replied in response to a question asked by Asif Farrukhi:

“Question: You are a leading scholar and critic who has done seminal work on Ghalib, Mir, the dastaan tradition in Urdu fiction, and the origins of the Urdu language. What made you turn towards fiction?

Response: Well, as you probably know, fiction is my first love. I began as a fiction writer when I was very young. I wrote a short novel when I was about 15. It was serialised in a magazine called Me’yar, published from Meerut. I didn’t save it and am quite happy now in my old age because it was a truly juvenile effort. I wrote as if I knew everything about all the big questions of life. In that year, or maybe in 1951 when I was 16, I wrote a story that was greatly liked by all my teachers and friends. I translated that story into English when I went to the university at Allahabad in 1953. The story was published in the university magazine. I went into criticism because of my dissatisfaction with contemporary criticism. I thought most of it lacked precision. Except Askari, everybody seemed to be belle lettristic, or vague and/or dogmatic. I believed I could remedy that situation.”

For Shamsur Rahman Farooqui, Urdu was his passion. He completed his masters in English and Being an IAS officer, he served as a Chief Post Master General in Patna and Lucknow respectively. He was also posted in Delhi as a Joint Secretary, Department of Non-conventional Energy Source India.

He has two daughters one is Mehr Afshan Farooqui, a professor at Verginia University and the other one is Dr. Baran Rahman, who serves as a professor in the Department of English, Jamia Millia Islamia.

Shamsur Rahman Farooqui has so many facets of his literary contributions, that it is almost impossible to even summarize all of them into one small write-up. It needs a book or many volumes of books. His opinions about the correlation between word and its meaning, needs a whole lot of discussion. His opinion about poetry and poetics need special attention of critics, his belief about the beginning of Urdu is quite interesting and based on research outcomes as well. Afsaney ki Himayat mein, was kind of a book that opened the door of discourse among Urdu scholars; not only in relation to fiction but also poetry-related book Arooz, Ahang aur Bayan, which talks about metre related issues. Besides these books, there are many that need to be analyzed.

Shamsur Rahman Farooqui is also a poet with a difference. Here are a few couplets for you to gauge his heights of creativity in poetry.

(If the sun is absent, from the heart of city,)

(The thing called shadow won’t be there)

(If you see from this side, it looks like our house)

(With another point of view, it looks like the sky)

In short, undoubtedly Shamsur Rahman Farooqui is a legendary personality of twentieth-century for Urdu literature and criticism.