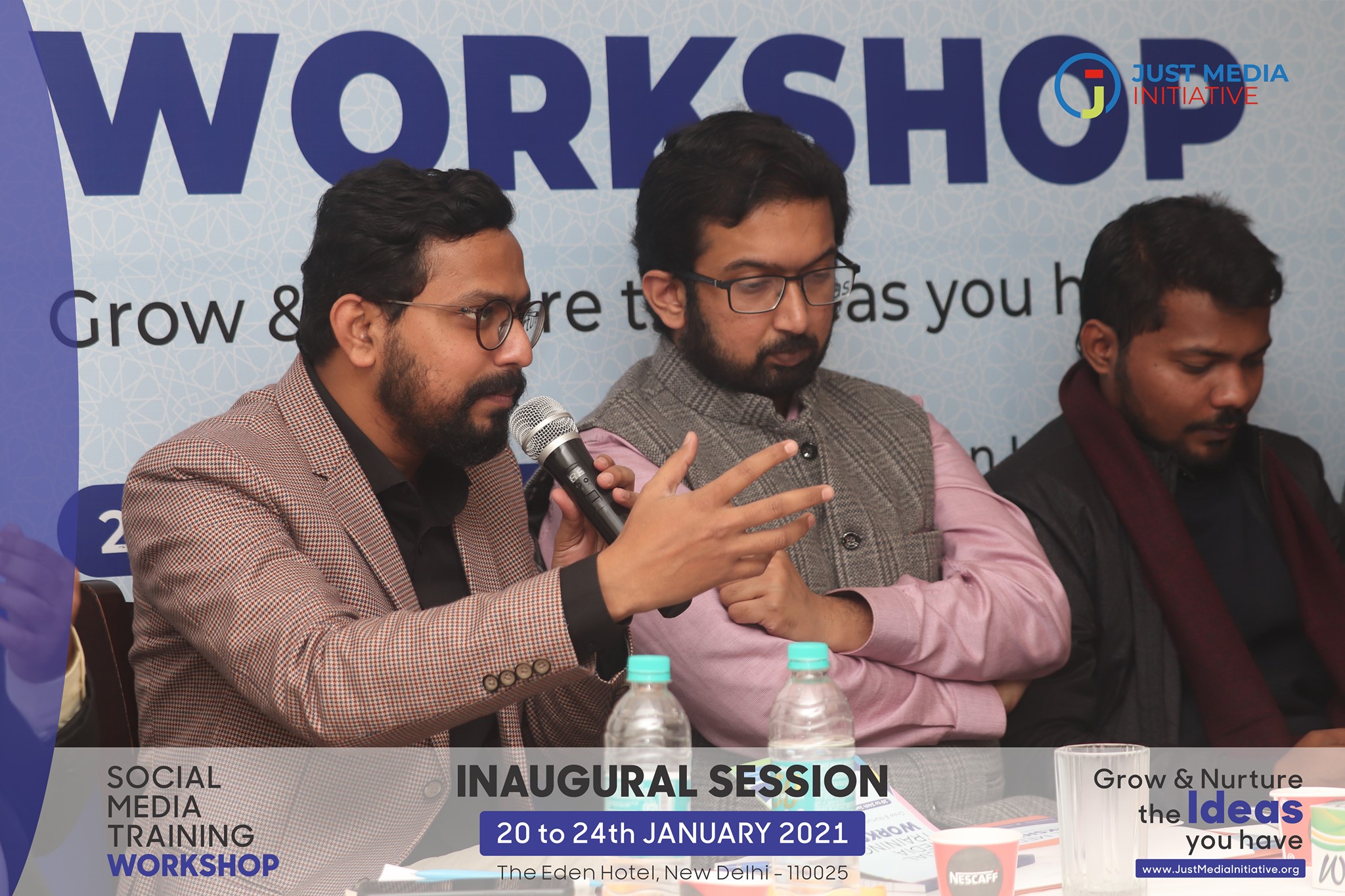 “Although the representation of the Muslims in politics and other institutions is underrepresented, their presence on social media is remarkable”, opined Aditya Menon in the inaugural session of a workshop organised by Just Media Initiative held on 20th January 2020.

Noted journalists Aditya Menon (The Quint), Prashant Kanojia (Bahujan Mag), Afroz Alam Sahil (Beyond Headlines), Shadab Moizee (The Quint), and Asad Ashraf (The Karvan) were invited as guest speakers for the inaugural session of the workshop. Around 50 participants across north India partook in the workshop.

Prashant Kanojia who was jailed for expressing his opinion on social media expressed that the victimization of the oppressed community and their suppression is always covered by the media but the uprising of the same oppressed communities is never given the deserving space in mainstream media.

Shadab Moizee expressed his concern over the sensitive issues on social media and advised the audience to be cautious and hold emotions before expressing opinions on sensitive matters. Highlighting the importance of facts and figures, he emphasised on perceiving and delivering opinions objectively.

Aditya Menon stressed on verifying every news before passing it on. He highlighted the influence and importance of social media in people’s movement and expressed that social media amplifies social realities.

Asad Ashraf urged to use social media for personal and community upliftment. He opined that we should always try to learn and engage in the process of dialogues and deliberations in order to break the stereotypes. He also stressed on the ethical use of social media.

Afroz Alam Sahil citing facts and data, opined that the future belongs to the visual world. He gave the example of one of the founders of YouTube, Javed Karim to drive home the point that video consumption has enormously increased in the last decade. He also advised the participants in the workshop that they can change the world by the correct use of social media, and that they should not let social media control or use them.

Syed Khaleeq Ahmad, presiding the session, expressed his hope that the darkness of fake and propaganda news will not last long anymore, the power of digital and social media will lit the light of new hope and the youth will change the course of history in the upcoming future. Sifwa Mak coordinated the entire session and delivered the vote of thanks to the guests and participants.

Masihuzzama, one of the organisers of the workshop underscored the importance of creating a responsible citizenry. “While we must enjoy our right to freedom and expression guaranteed by the Constitution of India, it is important to be responsible, democratic, and rational when we engage in dialogue with our fellow citizens on social media platforms”, said Masihuzzama.

Just Media Initiative’ aims to create media literacy among people who want to speak and be part of a vibrant media and communication process. The motive of the initiative is to provide necessary support and training for youngsters with creative ability in order to channelize their skills and potential in a way useful for individuals, society, and the country.