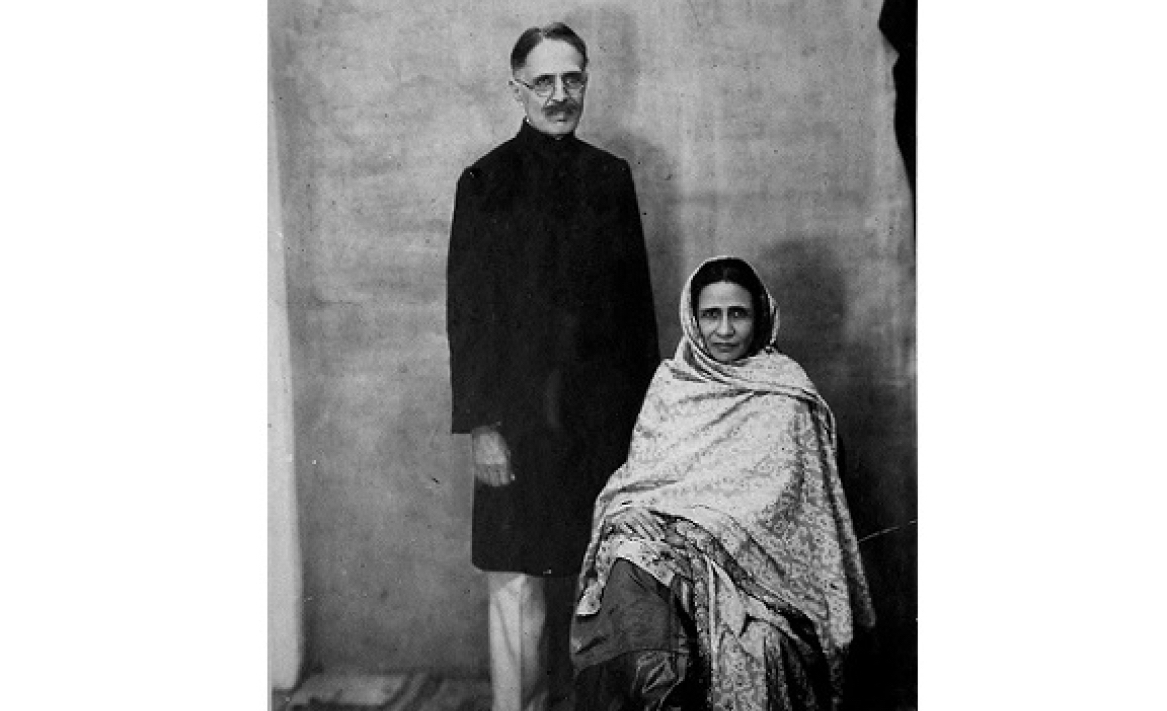 The Aligarh Muslim University (AMU) completed its hundred years as a modern residential university in December 1920. This excludes the 43 years of its existence as the MAO College since 1877.

There has been a perception that the Aligarh Movement, for whatever reasons, neglected the issue of modern education to Muslim women.

This column, therefore, delves into the trajectory of women’s educational reform in Aligarh, its nature and implications, through the profile of Waheed Jahan (1886-1939), wife of Shaikh Abdullah (1874-1965; a Kashmiri convert to Islam, named Thakur Das before conversion). Waheed Jahan was a pioneer of Muslim women’s education at Aligarh in the early twentieth century, whose biography was published in Urdu by none but her husband in 1954. Her role in ending the relative isolation of Indian Muslim women, while at the same time preserving the Muslim identity of the community, is worthwhile to recall in this centenary year of the AMU.

Background of the Reform

Women’s education in nineteenth-century India was no easy task. In the case of Muslim women, the task was even more difficult for they had a triply marginal identity: as colonial subjects, as women, and as Muslims. Not only did the custom of purdah keep them more isolated from the social and cultural changes, but their men also hated everything about the western cultural influence (being displaced as rulers by the British). As a result, the middle class (the initiators of reform) was to develop late among the Indian Muslims than their Hindu counterparts. Nevertheless, by the late nineteenth century, some men of reformist mind emerged among the Indian Muslims.

Such men started with writings advocating women’s education. In this regard, Nazir Ahmad (1833-1912) published his novel, Mirat-ul-Arus in 1869; Altaf Hussain Hali (1837-1914) published Majlis-un-Nissa, in 1874. Soon, magazines and journals followed like the Tahzib un-Niswan by Sayyid Mumtaz Ali (1860-1935), the Khatoon by Shaikh Abdullah and Waheed Jahan, and the Ismat by Rashid-ul-Khairi (1868-1936). Apart from literary activism, others tried more practical measures like opening schools for Mulsim girls.

As the movement intensified, so did the opposition against it. In such an atmosphere, even the talk of women’s education by a woman herself was quite a chivalry.

Yet, unexpectedly, there were women who defied the odds and broke the ground. Rashid-un-Nissa of Patna became the first Muslim woman to write an Urdu novel, Islah-un-Nissa in 1881 (published in 1894) when writing was a distant dream for Muslim women. Rokeya Sakhawat Husain (1880-1932), a widow herself, pioneered Muslim women’s education in Bengal. Muhammadi Begam (1878-1908) edited one of the leading ladies’ home journals, Tahzib-un-Niswan. One such icon of women’s education at Aligarh was Waheed Jahan.

Waheed was born in 1874 in a landholding family in Delhi. Her father, Mirza Ibrahim Beg was of Mughal ancestry, serving as a minor municipal official in Delhi. Her only brother, Bashir Mirza went to the MAO College, Aligarh, where he befriended Shaikh Abdullah (Thakur Das). As was the custom, Waheed received no formal schooling. She learned Urdu and Persian from her father and arithmetic and elementary English from visiting English tutoress.

In her autobiography, Kagazi hai Pairahan, Ismat Chughtai records how Waheed Jahan, before her marriage, had dreamt of establishing a school for the girls. She would gather her servants’ children and teach them, soon the rudimentary school became popular among her neighbors. It is noteworthy that, at a time when others (mostly men) were still imagining a school for girls (that too only in their writings), Waheed, in her own limited capacity, was actually making it happen.

Waheed married Shaikh Abdullah, a lawyer, who had a keen interest in women’s education since his school days. The same year (1902), he became the secretary of the Women’s Education Section (established in 1896) of the Mohammadan Educational Conference (MEC, founded at Aligarh by Sir Syed Ahmad in 1886), the main aim of which was to start a Normal School for girls and to train zenana teachers.

Luckily, Waheed’s marriage to a reformist like Abdullah helped her materialize her dream. To champion women’s education, they started an Urdu monthly, the Khatoon in 1904 with Waheed Jahan as editor. Begum Sultan Jahan (1858-1930) of Bhopal, Binnat Nazir-al-Baqir, Suharwardiya Begum, and Binnat Nasiruddin Haider were some important female contributors to the journal.

Unable to start a Normal School, Waheed Jahan advised her husband to start a primary school for the elite (Sharif) girls. In 1904, the MEC passed a resolution to start a girls’ school in Aligarh.

Waheed Jahan proved to be an efficient manager and fund-raiser.

Along with her husband, she organized a meeting of Muslim women in 1905- the first of its kind with participants from as far away as Lahore and Bombay. Judging from the context of the time when purdah among Muslims was so harsh, even the idea of organizing such an event was quite revolutionary. Aware of women education in Turkey and Egypt and its benefits to society, Waheed tried to convince the other women as:

When women meet among themselves, there will be more solidarity. . . Now there is a division between educated and uneducated women. Uneducated women, who do not go out, think that respectability is confined to the four walls of their houses. They think that people who live beyond those walls are not respectable and not worthy of meeting. But God has ordained education for both men and women so that such useless ideas can be dispensed with. . .

The meeting was a success, the exhibition of women’s craft secured good funds, finally, the women passed a resolution favoring a girls’ school in Aligarh.

With just seventeen students, in October 1906, a Zenana Madrasa (girls’ school) was started at Aligarh, teaching Urdu, arithmetic, needlework, and the Quran.

Leaving her own children in servants’ care, Waheed took the responsibility of supervising the school. Within six months, the number of students increased to fifty-six. Waheed’s efforts secured the school a cumulative grant of Rs. 15,000 and a monthly grant of Rs. 250.

By 1909, the school taught 100 students and shifted to a larger building.

The opposition to girls’ school took new forms. One amusing story is recorded in Shaikh Abdullah’s Urdu memoir (1969), Mushahedaat o Taaassuraat. Maintaining purdah, the girls were carried in daulis (curtained carriages) to school, some street urchins started harassing the school going girls by lifting the curtains of their daulis, the mischief only stopped when Shaikh gave one of the miscreants a good thrashing.  In another incident, Shaikh confronted a tehsildar who had accused the school of making the girls insolent.

The establishment of a boarding school

The idea of a boarding school invited opposition by a powerful section. The European Principal of MAO College, W.A.J Archbold; Ziauddin Ahmad (1873-1947); and Viqar-ul-Mulk (1841-1917) opposed vehemently. The couple however succeeded. The year also saw the culmination of Muslim women’s activism by the foundation of Anjuman-i-Khavatin-i-Islam (AKI) at the same venue.

Begum Sultan Jahan (1858-1930) of Bhopal graced the foundational ceremony of the boarding school, felicitating Waheed, she urged other women to follow her example. Fyzee sisters, Abru Begum, Begum Shafi, and Begum Shah Nawaz were the other dignitaries.

Only nine girls became the residents, most of them from Waheed’s own family. By the end of the year, the enrolment rose up to twenty-five. This was the result of what the historian Gail Minault calls Abdullahs’ portrayal of girls’ school as an extension of girls’ families and also of their own.

Waheed Jahan used to invite their parents of girls to Aligarh, for a few days stay in a hostel, to convince them that the conditions were safe enough to let their daughters stay, records Sheikh Abdullah, in his Mushahedaat o Taaassuraat. In sum, Waheed Jahan acted as a foster mother to these girls, counseling, nursing, and treating them as a part of her own extended family. This created a sense of sisterhood among the girls. They called each other as Apa (sister), Shaikh Abdullah as Papa Mian, and Waheed Jahan as Ala Bi. This familial system of ethos still remains unique to the Aligarh Women’s College.

Issue of Purdah in Reform

Both Shaikh and Waheed agreed that the purdah practiced in the Sharif society was more restrictive than purdah sanctioned by the Shari’a. But to secure social acceptance for their school, they chose to go with strict purdah, building fortress-like walls to fend off the male gaze, students’ mails were scrutinized, and only close relatives were allowed inside. Waheed supervised housekeeping, laundry, shopping; and even tasted each dish cooked for the girls.

This accommodation of purdah within the gamut of their reformist agenda, to gain social acceptance, was indeed very astute of the Abdullahs. Thus, Waheed Jahan succeeded in preserving both the elite and the “Muslim” identity of herself and her community, while simultaneously breaking the relative isolation of Indian Muslim women. The girls’ school became an intermediate college in 1925 and started degree classes in 1937 (with 250 students). Waheed passed away in 1939, only after seeing her school becoming a degree college.

True, that Aligarh movement was late to include women’s education in its fold. Even the school founded by the Abdullahs did not fulfil all its expectations- their choosing an exclusively Sharif clientele limited the impact of their reforms. But their efforts surely bore fruits. After the formation of AKI in 1914, the number of meetings and associations for women only increased rapidly in the 1930s. The Aligarh Women’s College produced many women of substance, who made sure to shine above and beyond purdah, some figuratively and others literally. The ladies excelled in various fields, from teaching to medicine to writing. Rashid Jahan, the daughter of Waheed Jahan became a successful doctor and a writer. Her short stories in Angare (1932) became the opening salvo of the Urdu Progressive Writers Movement (1936). She became the forerunner of other ‘radical’ women like Ismat Chughtai--one of the prolific Urdu novelists and short story writers.

The Women’s College currently has the strength of around 40,000 students, including overseas students from Turkmenistan to Mauritius. None of it would have been the same but for Waheed Jahan and her relentless efforts. Waheed and other women of her sort are the ‘heroines hidden from history’. They deserve frequent mention in both academic and popular writings. This centenary of AMU must ensure that Waheed Jahan and her likes are celebrated. This would be a small step in giving her the proper place in the history she made.

(Ishrat Mushtaq is a Ph.D. Candidate, Centre of Advanced Study in History, AMU)