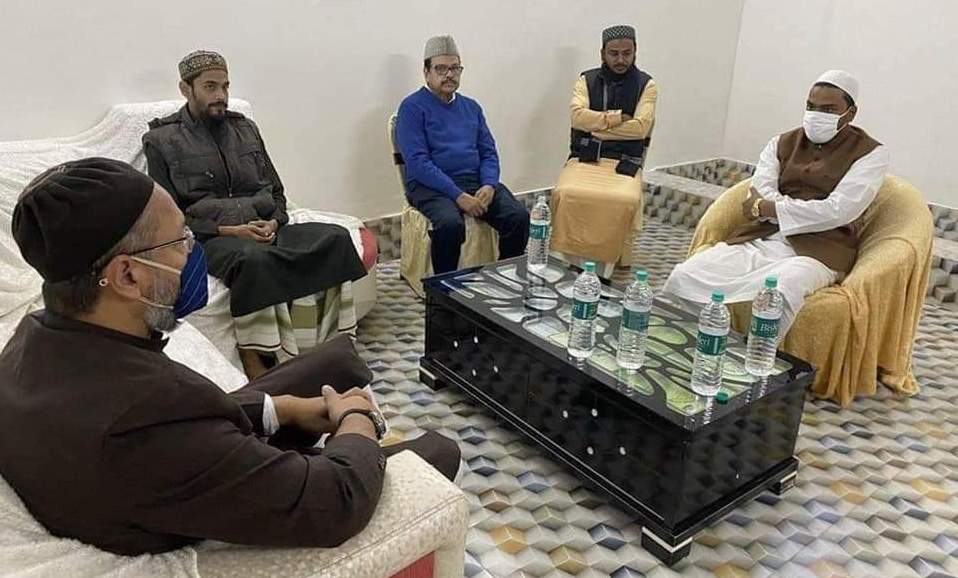 The political Cyclone Asaduddin Owaisi crossed over from Bihar to West Bengal after washing away the political aspirations of his opponents and leaving a trail of destruction in five Legislative Assembly constituencies. The roaring winds of Cyclone Asad has made the Trinamool Congress supremo and the West Bengal Chief Minister Mamatha Banerjee cover her ears with the pallu of her saree. The Cyclone Asad made a landfall today at Furfura Sharif on the banks of River Hooghly and combined with Hurricane Pirzada Abbas Siddiqui, Pirzada Naushad Siddiqui, Pirzada Bayazid Amin, and Sabir Ghaffar. The question crossing everybody’s mind whether the beleaguered Mamatha Banerjee bite the bait? If the answer is in the negative, the Trinamool Congress (TMC) may be blown away like the dry leaves in April – May 2021.

In case Mamata bites the bait, the Bharatiya Janata Party (BJP) will polarize the Hindu masses more than ever and wail like a widow about the so-called ‘appeasement’ of Muslims and the neglect of Hindus. The reality is Mamatha has hardly done anything for the Muslims in the field of education and jobs. There are no ticks anywhere in the parameters of development. Muslims continue to be at the rock bottom of society. TMC’s Firhad Hakim, minister, and mayor may not be able to get votes for the TMC beyond Kolkatta. The other minister Chowdhury Siddiqullah Chowdary has lost much steam. He may not be able to retain his own seat because of his dismal report card.

Mamata Banerjee cannot assume that Muslims will vote for the TMC due to the BJP scare. The current scenario is fluid at the moment. The communists can go to Moscow or Beijing but they cannot get the votes of Muslims. The Congress is buried in the foundations of the Ram Mandir. There is no hope for resurrection. The in-fighting in the party and even the household of the late heavyweight Congress leader and former union minister Ghani Khan Chowdhary is a divided lot. Now, Malda seems to be like the adulterated Dalda ghee, which is quite slippery.

Pirzada Abbas Siddiqui is no stranger to politics. In the past, the influential Pirzada family sided with the communists and later with the TMC in the hope that the lot of Muslims will improve under Mamatha’s leadership. With no change, whatsoever, Pirzada Abbas has been breathing fire against Mamatha Banerjee in South Bengal – his stronghold. He has proposed an alliance to the TMC and wants to field 44 candidates. There is no positive response from the TMC yet. On the other hand, Pirzada Abbas’s convoy was allegedly attacked by the TMC cadres last month. Whether Pirzada Abbas will still go for the alliance after the attack is a matter of conjecture. Earlier, the young Pirzada Abbas had claimed: ‘ I have respect for Owaisi.’ Perhaps, this respect took Asaduddin Owaisi to Furfura Sharif to explore the possibility of a political alliance with him. The AIMIM plans to contest about 50 seats in West Bengal. The AIMIM’s prominent leader Zameerul Hassan thinks that Mamatha Banerjee should agree to an alliance with the AIMIM – 50 seats leaving 44 seats for the Pirzada. If she spares 50 + 44 = 94, Mamatha can easily get about 100 % Muslim votes in the remaining seats.

It remains to be seen if Cyclone Asaduddin Owaisi tears away Mamatha Banerjee’s Castle in the company of Hurricane Pirzada Abbas Siddiqui. The communalists are already smelling blood! It is a test of political wisdom from Mamatha, Asad, and Abbas. Rabindranath Tagore and Nazrul Islam’s Bengal surely needs a better deal!

Translation: Don’t grow too high lest a storm makes you tumble down.

Meaning: Pride will have a fall.