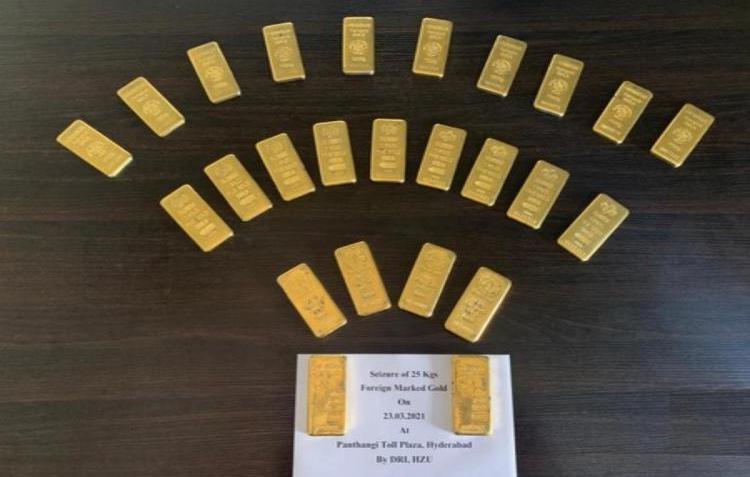 Bhaiyon, Behnon! Sab ka Saath, Sab ka Vikaas seems to be interrupted in Assam through the double-engine Bharatiya Janata Party (BJP) is in power in Assam and in New Delhi. It seems it is raining gold in Assam elections to the Legislative Assembly. The glitter of development or Vikaas from Assam has reached even Telangana! The Sab ka Saath Sab ka Vikaas was interrupted as officials from the Directorate of Revenue Intelligence (DRI) seized gold weighing 25 kg, estimated to be worth Rs 11.63 crore from an SUV on the Vijayawada-Hyderabad highway in Telangana. Three people traveling in the vehicle were arrested and sent to judicial remand. The DRI officials, acting on a tip-off, made the seizure of gold in Telangana’s Yadadri-Bhongir district, according to an official statement released on Wednesday. It is still not known whether the three arrested gentlemen were desh bhakts or urban Naxals or terrorists.

According to the DRI statement, the gold, weighing 25 kg with an estimated value of Rs 11.63 crore was seized at the Pantangi toll plaza on the Vijayawada-Hyderabad highway from an SUV bearing Assam registration number plates. Based on specific intelligence inputs, the alert DRI officials were on the lookout for a consignment of smuggled gold being transported from Assam’s capital Guwahati to Hyderabad. Somebody who did not get the demanded ‘cut’ could have tipped off the DRI officials.

The DRI officials intercepted the vehicle at the toll plaza on Tuesday and recovered the gold-bearing foreign markings. The gold was hidden not in a Jhola but in the dashboard in a space that was craftily created by removing the safety airbags. The smuggled gold, allegedly handed over in Guwahati, had traversed the poll-bound states of Assam and West Bengal. But the gold was intercepted before it could reach its destination of Hyderabad. Hyderabad is the capital of Bangaru (Golden) Telangana. Perhaps, for this reason, Hyderabad was chosen as the selling point.

People sell gold in dire need. There could be no bigger dire need than fighting elections. Before they put themselves in the political cattle market for sale, they need to bag the highest number of votes. All this requires huge sums of money. So, gold has to be sold in anticipation of the golden days ahead. It is significant to note that the names of the three persons arrested have not been released. Were the three just carriers for a ‘big fish’ who managed to stay out of the DRI net?

The pandemic Covid-19 has struck the middle class and pushed them below the poverty line. But the political class has prospered unhindered. Jay Shah is a super businessman who can churn profits of 1600 percent. Assam’s Minister Himanta Biswa Sarma, who is fighting the ‘Mughals’ led by Badruddin Ajmal has a very enterprising family, whose assets almost tripled in 5 years. This is according to Sarma’s own affidavit filed with the Election Commission. Why is the bright child of Jawaharlal Nehru University – Nirmala Sitharaman forced to juggle with numbers of our tottering Indian economy? Narendra Modi Ji should consider either Himanta Biswa Sarma or Jay Shah as our next Finance Minister.

Meanwhile, it will be a matter of interest watching if Janeudhari Rahul Gandhi and the ‘Mughal’ Badruddin Ajmal with a bottle of perfume in his hand are able to pierce the knights in shining armour – Sarbananda Sonowal and Himanta Biswa Sarma. Whatever be the outcome of the Assam elections, hopefully, River Brahmaputra will not change its course!

What do you think will happen in Assam post elections? Will it be horse-trading or gold trading?