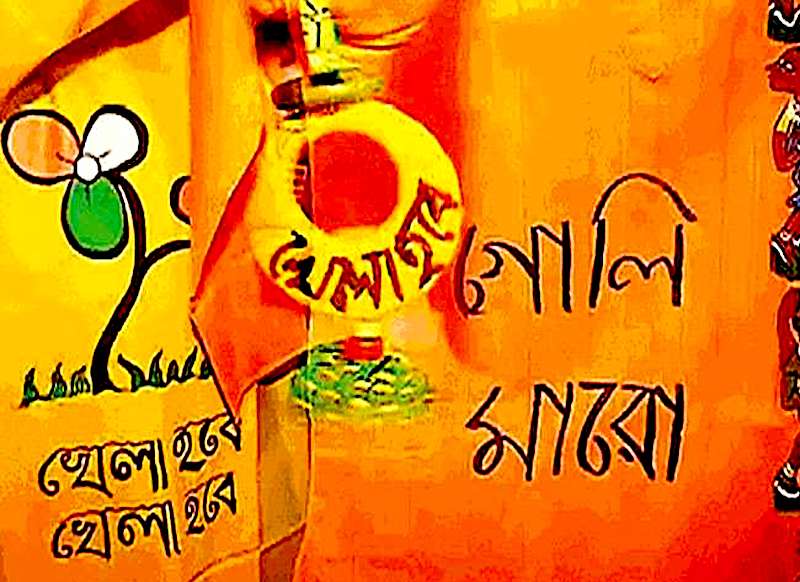 A pandal for the goddess Saraswati is booming loudly with the pop tunes Khela Hobe, Khela Hobe, (Game on, game on) Vison Rokom Khela Hobe (the dangerous game is on). Bus, train, cars, discotheques are trumpeting Khela Hobe. Even sweet shops are churning new sweets displaying Khela Hobe. What is this Khela Hobe and what has it got to do with Bengal? Is it a party song, a cricket song, or politically loaded jargon? It all started with a battle of words used by political party leaders at different rallies in the context of the 2021 Bengal assembly elections. Then it was transformed into a full-fledged political theme song. However, it became a massive hit once it took the shape of a rap song popularised by a local D.J. Countering this another Bengali hit song ‘Tumpa Sona’ has been manipulated by CPIM for their political rally. What is notable is the manner in which the people of West Bengal in the last couple of years has consumed such scripts as celebratory anthems.

Just at the onset of the pandemic, it was assumed that TMC would take backstage in the West Bengal Assembly elections easing the way for the BJP to take a stronghold over Bengal. It became more evident in the context of MLAs resigning from TMC gradually joining BJP. But surprisingly TMC unleashed its real power making a major comeback through some master-stroke campaigns. To name some of them Duare Sarkar (Government at your door-step) played a major role in regaining the former faith among the masses in Bengal. Encashing upon this vulnerable stage TMC came up with its election theme song Khela Hobe targeting mostly the young and energetic minds of Bengal. Closely looking at it seems to be a kind of challenge to arouse opponents for a political match. In the same way, just before the Brigade rally, it was difficult to fathom the roles of the CPIM Congress alliance for 21 Assembly elections. The massive success of the Brigade rally and the popularity of ‘Tumpa Song’ among the masses made it clear that they are back in the election battle and must not to be taken lightly.

Indian elections have a tendency to use slogans to convey political messages among Indian minds. As we know, the BJP vigorously used the slogan ‘Ab Ki Baar Modi Sarkar’ (This time Modi government) to campaign for the 2014 Loksabha elections which also earned a landslide victory for them. Generally, the major political parties and their opponents have implemented such catchy one-liners for election campaigns. Specifically in West Bengal Mamata Banerjee led T.M.C picked up two most important slogans ‘Ma Mati Manush’(Mother, Motherland, People) and ‘Poribartan’ (The Change) to put an end to the 34-year-old left government. Whereas in the 2016 assembly elections the slogans so far used transformed into full-fledged songs ‘Mamata Di Arekbar’ (Mamata di once again) which gained huge momentum among the public. Following this trend 2019 Loksabha elections T.M.C came up with another theme song ‘Delhi Jabe Hawai Choti’(which indicates that Mamata Banerjee will visit Delhi in her slippers). In this manner theme songs and D.J culture has become integral to Bengal elections which has also attracted all major parties to join this trend.

The 2021 assembly election is a major turning point not just in the political history of Bengal but the entire nation as well. Bengal has been a political hotspot since independence. It has always been the case that the Central ruling force could not make a successful sway over Bengal since the last forty-five years. During the rule of Congress in the center, it failed to make any impression in Bengal. Now the BJP which central ruling force is making similar attempts with all its might. The P.M, the Home Minister, along with several important ministers including BJP chief ministers of other states are paying several visits to West Bengal on various pretexts. What is evident from these is the earnestness to establish a ‘double-engine’ government.

In a recent government pogrom commemorating the birth anniversary of Netaji Subhas Chandra Bose held on 23rd January at Kolkata C.M Mamata Banerjee refused to deliver a lecture to protest the chanting of Jay Shree Ram in presence of P.M Narendra Modi. A few days after this incident T.M.C coined their new theme song ‘Khela Hobe’ which is loaded with political innuendos. It goes without saying that this mass anthem has energised the T.M.C workers and followers making it a driving force for actions. ‘Khela Hobe’ might also be seen as a counter-narrative to the Jay Shree Ram saga keeping it more secular than it’s BJP counterpart.

Decoding the lyrics ‘Khela Hobe’ focuses on the campaigns that Mamata led T.M.C has introduced in recent years in addition to the loopholes of the opponent. It also tries to retain the lost favour of people resuscitating them with new hopes and enthusiasm. ‘Jay Shree Ram’ a religious chant and a party slogan rigorously used by BJP in northern India, was applied to gain popularity in Bengal election. In the same way, CPIM and Congress alliance wanted to be back in the battle with all energy and impression. With all the three narratives battling simultaneously, we need to wait to see whether the masses accept or deny the influence of ‘Khela Hobe’ ‘Tumpa sona’ and ‘Jay Shree Ram’ in Bengal.