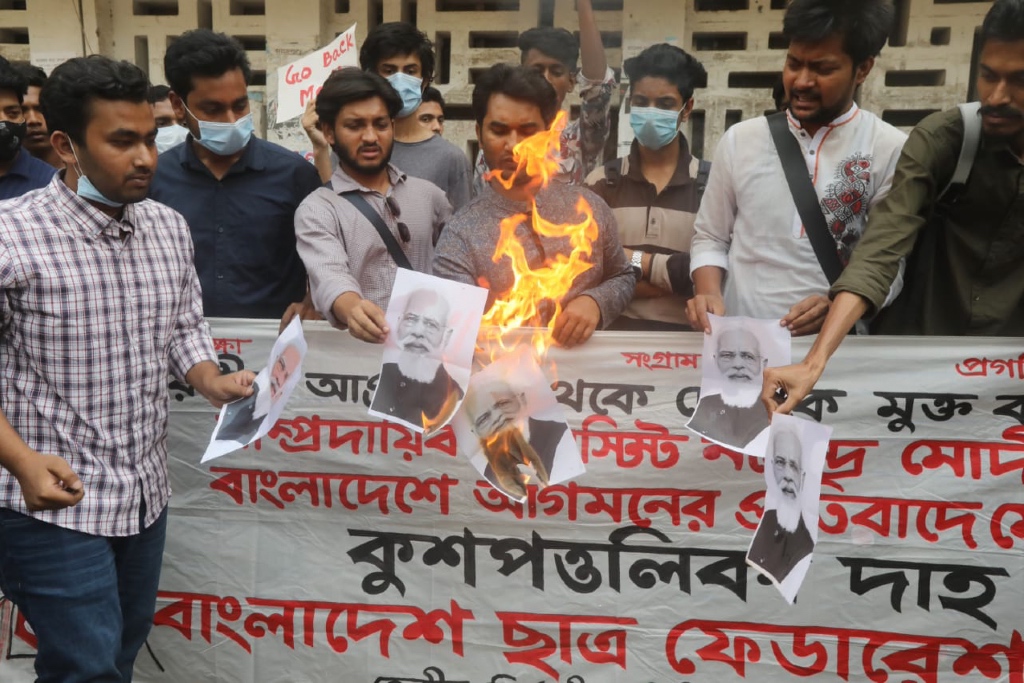 Narendra Modi the Rashtriya Swayamsevak Sangh (RSS) Pracharak turned Prime Minister of India, is a divisive force even in Bangladesh. His planned visit to the two Bangladeshi temples to garner Matua Hindu votes in West Bengal has created chaos and led to huge protests from intellectuals, scholars, and students across Bangladesh. The Dhaka University campus resembles a battle front with anti-Modi and pro-Modi demonstrations. The extremist Hindu student leader Sanjit Chandra Das of the Bangladesh Chhatra League (BCL) has threatened to ‘peel off the skin’ of anti-Modi protestors at Raju Square in the Dhaka University. This threat was in response to anti-Modi protests and the burning of Modi’s photos on the university campus. Sanjit Chandra reportedly has the support of rabid Hindutva elements in West Bengal and Nagpur in Maharashtra. His neo-found riches and flashy lifestyle has become debatable apart from his alleged threats to Muslims in Bangladesh.

The anti-Modi protestors point out that Bangladeshi Prime Minister Sheikh Hasina has invited Narendra Modi to Bangladesh despite the gunning down of several Bangladeshis by the Border Security Force (BSF) at the border from time to time. The BSF contends that it shoots only at those who try to infiltrate into India. The protestors are also peeved that Bangladesh did not get a fair share of Teesta waters. They allege that Hasina is trying to hold on to power and hide her corruption. They claim that Hasina is a dictator who has crushed dissent and any opposition with open support from some rabid Indian politicians. They predict that Hasina will flee to India after losing power. They gratefully recall the assistance rendered by the then Prime Minister Indira Gandhi in kicking out Pakistan from Bangladesh. But they assert that Narendra Modi has no role in Bangladesh’s freedom movement. Bangladeshi Prime Minister Sheikh Hasina could have invited Indira Gandhi’s grandson Rahul Gandhi instead of Narendra Modi. President of India Ramnath Kovind would have been welcome. They pointed out that Narendra Modi is a ‘fascist’ who presides over genocide and riots to get Hindu votes and ride to power. They demanded that the ‘Butcher of Gujarat’ should not step on the Bangladeshi soil. The thousands of protestors at Bait Al Mukarram – Dhaka’s largest mosque had the choicest of words to describe Narendra Modi’s persona. The security personnel had a tough time controlling them. The Bangladeshi authorities have assured that there would be no let-up in Narendra Modi’s security.

Separatism and Hindu extremism are not new to Bangladesh. Narendra Modi’s planned visit to Bangladesh has once again ignited the fires of separatism and the demand for a separate Hindu country — Bangabhumi is gaining strength. The extremist Banga Sena was started in 1975 by Kalidas Baidya to create a separate Hindu country comprising Bangladesh, West Bengal, Assam, and other parts of North East India. It may be recalled that more than 400 Banga Sena terrorists were arrested in India on 18th February 2003 for trying to cross over into Bangladesh from the North 24 Paraganas in West Bengal. In 2004, the Director-General of Bangladesh Rifles gave a list of terrorists to the Indian authorities, which documented that the terrorists carried out communal and separatist activities. Earlier, the BBC had carried a report – Bangladesh alleges ‘Separatist Plot’ (22nd Dec. 2001):

The then Home Minister of Bangladesh, Altaf Hossain Chowdhury, had said that some members of the country’s minority Hindu community are engaged in a plot to promote separatism in the country. He had specifically named Kalidas Baidya and Chittaranjan Sutar – as leaders of the alleged separatist plot.

Enough blood has been spilled in pre-partition Bengal and post-independence. Human life is more important. Animals fight for territories but human beings are supposed to be civilized. Whether a Hindu or a Muslim on either side of the porous border has a right to life! Politicians and dictators come and go but people should live like brothers.

Peace is the only sensible alternative!