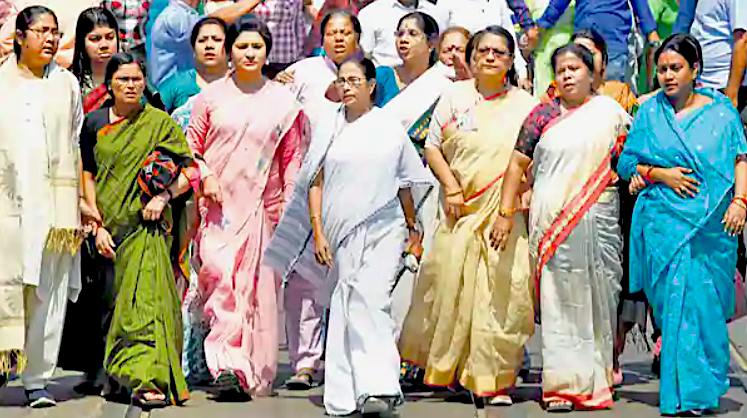 A few days back we witnessed another Women’s Day followed by several political instances. On the occasion of International Women’s Day, several programs are organized every year to debate and discuss women’s rights and issues. The hype is more in the developing nations, especially India. It is as if all reverence and accolades are to be showered on this day.

How far is the representation fair in reality?

Out of 29 states in India, West Bengal is the only state to be ruled by a female Chief Minister at present. Recently, she endured a painful leg injury while addressing a crowd in Nandigram. A high-voltage state assembly election is in vogue and all eyes on it. If we look at the reality this election is a tug of war between an undaunted popular female leadership and conventional masculine forces.

There is no doubt that Mamata Banerjee and her iconic personality is the only USP for the ruling party TMC for this assembly elections. BJP ruling in the center has presented itself as a competent opponent. It is trying to make a massive entry into Bengal with all its muscular might. The CPI(M)-Congress alliance with a strong ideological base is also trying to make a major comeback through Bengal. In the case of TMC, the story is different, with its single woman founder being the only driving force. Of course, this is a rare picture in the contemporary Indian political scenario. Can we foresee women empowerment in its true sense?

Ms. Mamata Banerjee has served two terms as a Chief Minister of Bengal and it’s high time to evaluate her contributions as a female Chief Minister towards half of the electoral population. As we know, out of the 7.2 crore electorate in West Bengal, 49 percent comprises women which is 3.59 crore. Since the beginning, Ms. Banerjee has concentrated on facilitating women empowerment by implementing a variety of women-centric schemes.

How female voters have been influenced by the various schemes (Prokolpos) of the Mamata-led government in the last decade is a major concern. It is interesting to note how these schemes differently cater to the varying priorities of women. While some are meant to facilitate women’s education, some are meant to empower them through skill development.

One of the noteworthy schemes ‘Kanyashree’ earned international recognition by winning the United Nations Public Service Award in 2017. It aims to reduce female school dropout rates, discouraging child marriage, and encouraging education to girl child aged between 13 and 18 by providing cash incentives. Quite similar to it the ‘Rupashree Prokolpo’ also aimed at discouraging child marriages ensures an amount of 25000 at the time of adult daughters’ marriage for the economically underprivileged families. Another scheme ‘Sobuj Sathi’ provides bicycles to students, especially female students. ‘Swasthi Sathi’ scheme issues a family health card by nominating the female guardian of the family.

In addition to all these schemes, Chief Minister Mamata Banerjee has appointed an all-women apolitical wing ‘Bongyo Janini’ to reach out to the women at all levels. This was done to connect to people in general who do not wish to be linked with politics directly ensuring an atmosphere of safety against women crimes.

The hue and cry over reserving 33 percent seats for women candidates subsided in the parliament for lack of support and the bill was never passed. However, for the 2019 Lok Sabha elections, the TMC party had nominated 17 women candidates out of 42 seats. Mamata Banerjee by nominating 41 percent female candidates showed that the representation can be fair even without a reservation. This step added a huge stimulus to the political representation of women in India which will remain etched forever in history.

A survey conducted in 2016 by the Centre for the Study of Developing Societies (CSDS) emphasized the increasing political awareness and participation among women and how it has benefitted West Bengal elections generating votes for the ruling party. A remarkable increase in the female vote share of TMC has been noticed in the last two elections, 2016 Assembly and 2019 Loksabha elections. This discourse of participatory democracy is a true indicator of the empowerment of women. Now, this is perhaps one of the major reasons why different political parties are focusing on women voters and female representation. At this juncture, the question of how female votes would determine the fate of Bengal in the upcoming Assembly elections crops up.

Recently for Bengal Assembly elections, TMC launched a state-level campaign ‘Bangla Nijer Meyeke Chay’ (Bengal Wants her own daughter). This indicates how TMC is focused on attracting female voters. Also looking at the rallies addressed by Mamata Banerjee, one can easily fathom her popularity among females. This probably owes to the fact that women feel more secure in her presence and can relate to her in a better fashion.

Mamata Banerjee has nominated 54 female candidates for Assembly elections which is nearly 20 percent. Similarly, the BJP ruling at the center also aware of the TMC’s policies is also making counter-strategies to target women voters. They are organizing Padyatras and Prabhat Pheri (early morning rallies) by women workers. The BJP tried to popularize women-centric schemes like the Ujjwala Yojana (implemented in 2016) in Bengal.

In such circumstances, one cannot deny the effect of 49 percent votes coming from women in Bengal elections. Women’s votes are the least recognized factor in Indian electoral politics. We hope that on this woman’s day everyone pledged to recognize and encourage female participation in electoral democracy. The results would declare and decide the fate of Bengal.

Sanjida Parveen is a Research scholar in the department of English literature, Aligarh Muslim University, India.