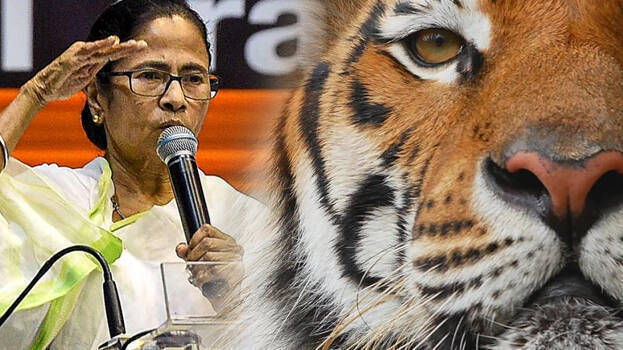 The Royal Bengal Tigress Mamata Banerjee mauled the bigoted Bharatiya Janata Party (BJP) to take the crown in a hatrick. The ferocious tigress left the ‘two outsider goons’ gasping for breath. Through the Hindutva infected brigade in the Central Industrial Security Force (CISF), BJP’s anti-Muslim hate factory owners Narendra Modi and Amit Shah even got to fatally shoot at the Muslims’ chests in Sitalkuchi to scare away the Muslims from the polling booths. The game plan was to stop Mamata-led Trinamool Congress’ juggernaut in Rabindranath, Nazrul Islam, and Netaji’s West Bengal. The martyrs of Sitalkuchi must be laughing in heaven now as Didi successfully kicked out Dadas (rowdies) from the intellectual state producing Nobel Laureates. The Hindu – Muslim brotherhood though dented by the devils has come out stronger than ever. West Bengal survives for now.

In West Bengal, chanting Hindu scriptures from the dais during an election campaign rally was unheard of till 2020. Yet in 2021, Chief Minister Mamata Banerjee ended all her campaign rallies and roadshows reciting shlokas to give a tit for tat to the Hinduism-flaunting BJP. It may be recalled that in 2019, the BJP bagged 18 of 42 Lok Sabha seats. It gained a lead in 121 Assembly seats, just 27 short of the required simple majority. Large-scale opportunistic defections of Trinamool Congress (TMC) legislators to the BJP including top turncoat Mir Jafars like Suvendu Adhikari and Rajib Banerjee put them closer to the seat of power in Bengal or so the BJP lived in a delusion.

The BJP has a habit of visiting brothels and calling the prostitutes there as wives. They do not realize that the prostitutes are everybody’s wives though for a few moments only. Similarly, the BJP does not have its own cadre as candidates but choose turncoats from other parties as their candidates. Perhaps, it is also the first time that a sizeable number of turncoats contested the polls on a BJP ticket and bit the dust naturally as the voters rejected them for ‘sleeping with the enemy’ – TMC’s enemy.

The Trinamool Congress depended on its welfare schemes to see it through for a triumphant return to third term. The TMC government led by Mamata Banerjee had launched about 70 welfare schemes, including Kanyashree (Rs 25,000 for a girl child who studies till Class XII) and Rupashree (a one-time payment of Rs. 25,000 during a girl’s marriage). These seems to have been on the women voters’ minds when they lined up at the booths to vote. After the 2019 Lok Sabha losses, as a course correction, the Mamata government launched several outreach programmes like Duarey Sarkar (government at the doorstop), Paray Paray Samadhan (resolving issues in the neighborhood), and Swastha Sathi, a health insurance scheme where the medical card is handed over to the oldest woman member of the family. All these factors converted into votes for the TMC.

Polarisation on religious lines was something that Bengal had successfully managed to keep at abeyance to a large extent in its post-partition political history. The polarising undercurrents existed, but communal fears and scaremongering were not the tactics deployed by political parties. This time the BJP exceeded all limits and stooped to the lowest to polarize voters. The mentally constipated extremists Dilip Ghosh and Suvendu Adhikari threatened Muslims like never before. The threat to repeat Sitalkuchi and have a bloodbath of Muslims by Dilip Ghosh and the Pakistan rant by Suvendu Adhikari polarized the Hindu voters. This led to the Muslims solidly backing the TMC as they saw a savior in Mamata Banerjee. Dilip Ghosh and Suvendu Adhikari should not go unpunished for their daredevil criminal polarization, threats, and violence against Muslims. Mamata should explore to send them to jail under UAPA and NSA. Due to extreme polarization, nothing was left of the Left parties and the dying Congress.

Never before did the Bengali voters go to vote keeping in mind the religious identity. Like in other states of North India, the BJP and its whisper campaign of ‘Hindu Khatre Main hain’ false bogey has now become a part of the politics in West Bengal too. In the fourth phase of polling at Sitalkuchi Assembly segment number 5 in North Bengal’s Cooch Behar district, central forces under BJP leader Amit Shah’s command opened fire, killing four Muslims. The forces falsely maintained that they fired in self-defence, a claim the Trinamool government rubbished. There are extreme fears of violence after the May 2 counting of votes. According to a preliminary count, more than 20 people have lost their lives since the Model Code of Conduct came into force with more than 30 candidates attacked during the campaign. Mostly the BJP and at times the TMC indulged in violence. The BJP’s frenzied push for the CAA and NRC has helped the party keep the communal cauldron boiling.

Mehul Choksi’s ‘Bhai’ Narendra Modi introduced a “syndicate” into the national political lexicon this election season, referring to the organised system of controlling businesses and supplies in construction work that started during the Left regime. It found some patronage under Mamata’s once spoilt brats Mukul Roy and Suvendu Adhikari in all spheres of life. Since 2014, the BJP has been talking about the Saradha scam and later the Narada sting operation but little action has been taken since the alleged scamsters Mukul Roy and others are in the BJP now and have become holy cows!

The BJP’s frenzied push for the CAA and NRC has helped the party keep the communal cauldron boiling. The citizenship issue had become a key poll plank in this Assembly election, particularly in North 24-Parganas, Nadia, East Burdwan and in some north Bengal districts. This was due to the fact of the sheer large numbers of the Matuas — Hindu refugees from Bangladesh — many of whom live in fear that they will be labelled Bangladeshis. The BJP claimed to guarantee them citizenship, despite Mamata Banerjee and other Trinamool leaders saying the community had absolutely nothing to worry. Yesterday, the BJP won 14 seats in the Matua belt of Nadia and North 24-Parganas, apart from parts of north Bengal. This is largely due to the arrangement of Matua temples visit of Narendra Modi by his eye candy and RSS-Mossad double agent Sheikh Hasina of Bangladesh. As a result, the TMC drew a blank in the Matua belt. However, it won 36 SC seats of the 68 and 11 ST seats of the 14 across the state. In Nadia, the BJP won Krishnaganj (SC), Ranaghat North East (SC), Ranaghat South (SC), Ranaghat North West, Chakdah, Kalyani (SC), Haringhata (SC). In North 24-Parganas, where the Matua community’s holy abode is located, the saffron party won Bongaon South (SC), Bongaon North (SC), Gaighata (SC), Bagdah (SC).

Mamata Banerjee is the only woman chief minister now. The misogynist and the patriarchal BJP sent all its army of union ministers, chief ministers to Bengal against a single woman. Mamata Banerjee dodged all the firepower from Narendra Modi and Amit Shah, who must learn that it was not wise to put Ram against Durga. Jai Sri Ram perished against Kali Calcuttewali in a bitter battle.

The most important and urgent matters that deserve Mamata’s attention are handling the Covid-19 situation and bring down the Covid cases in Bengal as the superspreaders Narendra Modi and Amit Shah will take time to cry out their hearts and not venture into Bengal anytime soon! By all means, Mamata Banerjee must stop the communal riots, which the disgraced BJP may unleash in the coming days or months. Mamata Banerjee should remember the defeated BJP in Delhi not long ago.

Will the next Indira Gandhi be from West Bengal? Come 2024. We will have the perfect answer. For now, the Royal Bengal Tigress Mamata Banerjee has mauled the BJP and savouring its blood. The ‘Two Outsider Goons’ are gasping for breath!