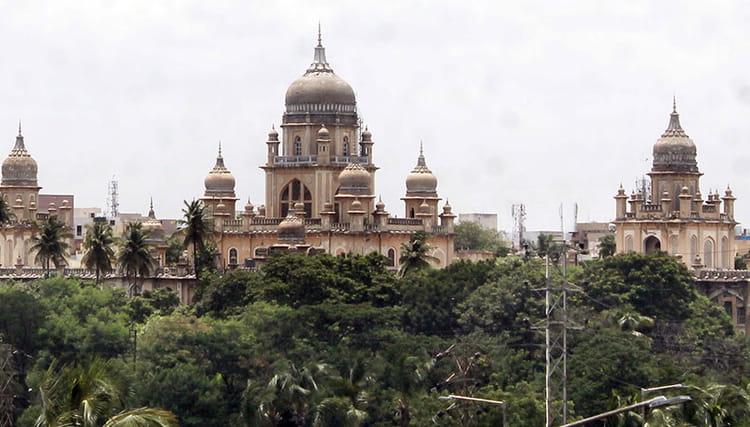 The Telangana High Court in the upcoming hearing should shatter Telangana Chief Minister K Chandrasekhar Rao’s dream to demolish Osmania General Hospital (OGH) and see to it that India should not lose forever a piece of its marvellous medical heritage. In 2015, K Chandrasekhar Rao had ordered the demolition of the Osmania General Hospital located on the banks of the River Musi in Hyderabad on the figment of imagination grounds that the structure is falling apart. He retracted on protests from heritage activists later. KCR either does not understand the meaning of national heritage or has given in to the strong and powerful real estate lobby. In fact, the TRS government has turned out to be Telangana Ruining Samithi if one goes by the demolition spree starting from Saifabad Palace, Secretariat buildings, etc. KCR had cast his eyes on the precious Errum Manzil too for his Secretariat project. Errum Manzil would have perished too but for the intervention of the court. The Hon’ble Chief Minister K Chandrasekhar Rao is a person capable of as easily identifying himself with any whimsical, rustic villager as with a corporate tycoon since he has his feet firmly planted in his original moorings. Of him, it can be said that he is a well-grounded person.

K Chandrasekhar Rao wants twin multi-storied towers to replace the existing heritage building constructed in typical Osmanian Indo – Saracenic style of architecture as part of a riverfront development plan a century ago by the City Improvement Board or Aaraish Baldia as it was popularly called in Urdu. What KCR seems to have forgotten is that the Osmania General Hospital is not just another crumbling government health structure but a glorious seat of a 175-year-old medical institution that made phenomenal international contributions to the development of medical science. It may be recalled that modern medical education in Hyderabad began in 1846 with the founding of the Hyderabad Medical School with Afzal Gunj Hospital serving as a teaching hospital, under the patronage of the then fifth Nizam of Hyderabad – His Highness Afzalud Daulah Bahadur. Hyderabad Medical School was later rechristened as the Osmania Medical College and Afzal Gunj Hospital was renamed Osmania General Hospital when the present structure was built in 1925. Similarly, school education in English medium began in 1855 with the construction of my Alma Mater – All Saints’ High School at Gunfoundry, Hyderabad.

It is significant to recall that India-born British doctor Sir Ronald Ross made his Nobel Prize-winning discovery on malaria in Hyderabad in 1897. It is not out of place to mention the contribution of Afzal Gunj Hospital to the development of a critical branch of medicine — anesthesia. The Surgeon-Major E Lawrie — Principal of the Hyderabad Medical School, who was also a personal physician to the sixth Nizam, His Highness Mir Mehboob Ali Siddiqui Khan Bahadur, played a major role in establishing the efficacy of chloroform as anesthesia. He conducted a series of animal experiments at the Afzal Gunj Hospital to study chloroform effects. A pioneering contribution of the Hyderabad Medical School was that it gave the world its first qualified woman anesthetist Dr. Rupa Bai Furdoonji in 1889. This was in the age when doors of leading medical schools in the United Kingdom and the United States were shut for women.

In 2018, a hurriedly commissioned report to justify the decision to demolish the OGH was prepared by the Jawaharlal Nehru Technological University (JNTU). It cautioned that parts of the building may suddenly collapse due to the deterioration of timber used. But such suggestions have been debunked after a technical assessment was carried out by the Indian National Trust for Art and Cultural Heritage (INTACH). The INTACH assessment concluded that the heritage block of the hospital is in “a very good, structurally stable condition, without any threat to its life or that of its occupants”, provided immediate steps are taken to repair and restore the building. “All the damage observed is mostly on the surface of the building and is reparable. Most damage is due to poor maintenance and leaking pipes,” observed Anuradha Reddy, Convener, Hyderabad chapter, INTACH, when the report first came out. The report says that a proper conservation and restoration plan can be executed without demolishing heritage blocks in the hospital complex.

Hyderabad’s happening historian Dr. Safiullah contends that construction of the new OGH can be taken up on the vacant 6 acre land in the OGH premises without demolishing the heritage OGH structure. The OGH built at a cost of Rs 20, 56, 535 (Osmanian rupees) in 1925, is spread over 26 acres. Dr. Safiullah has been the guiding glue putting together more than 250 heritage buffs from different fields. His team is at the forefront of this heritage battle. Historians, heritage conservationists, doctors, engineers, journalists, bankers, artists, lawyers, and super cop S A Huda, IPS (Retd.) present their case in one strong voice to preserve the OGH heritage structure.

Hyderabad’s pride of pleaders – Shafeeq Rahman, who was invited by the Massachusetts Institute of Technology (MIT), the United States in 2011, to present a lecture on the state of the criminal justice system in India at a workshop on communal violence in India., pleads the heritage case thus: All monumental buildings and heritage structures must be preserved from demolition to demonstrate to future generations the syncretic culture that prevailed during the time of the much-maligned but phenomenally progressive HEH Nizam Osman Ali Siddiqui Khan Bahadur. There must be concerted action to protect every single monument that speaks of an Islamic character of Muslim association because there are vested interests including in the government and in political circles that are seeking to erase all remnants of such great signs of harmony and harmonious existence. This effort at erasing our shared cultural and religious heritage is by either actively encroaching into those monuments that speak of an Islamic connection or actively demolishing them under pretexts and also by ignoring them and allowing them to fall into disrepair and then collapse.

The erudite lawyer Shafeeq Rehman suggested that there must be a high-powered body created from heritage enthusiasts and knowledgeable scholars who are aware of the facts and who can relate to the monuments as actual stakeholders in the preservation of the history of shared cultural and religious heritage. This body must be answerable only to the courts with high participation also of prominent voices from the media. It is seen that the constitution also requires the representation of certain categories of people (SCs, STs) in government offices and jobs because it is recognized that in the absence of participative voices of actual stakeholders in decision-making processes unconcerned people taking decisions about such valuable things. They take decisions that are at variance with what is required and which are taken only to please the powers that be. Such people do a great disservice to the cause. Therefore these institutions and bodies should be manned only by people who are stakeholders and who have a connection in religious, political, and scholarly terms with the monuments and heritage in question.

Dr. Mohd. Iqbal Jaweed, who graduated from Osmania Medical College in 1968 says: ‘OGH is a diamond in Hyderabad’s skyline’! He opines that the neglect of OGH began in 1985 ‘to divert people’ to private hospitals. He says that a 2019 ruling of the High Court against the state government’s decision to demolish Errum Manzil applied to all heritage structures including OGH. Dr. Iqbal Jaweed’s father Dr. Mohd Osman, who served Osmania till his last, was one of the finest doctors Hyderabad has known.

Vintage heritage architect and conservationist par excellence Vasanta Sobha Turaga has expressed her shock at Hyderabad Member of Parliament Asaduddin Owaisi’s statement that he is not concerned if the Osmania General Hospital building stays or is demolished by the government. It may be recalled that a week ago, Owaisi had demanded the construction of a new hospital building at OGH to lessen the sufferings of the people during the pandemic Covid-19.

Ace historian Amarbir Singh, learned historian Prof. Salma Farooqui, senior heritage buffs Dr. Haseeb Jaffery, Mrs. Juhee Ahmed, Raghu Cidambi, Ahmed Al-Sharif, and the Gulf-returned Amjad and Shakeel bin Abid have lent their strong voices to preserve the national medical heritage in the form of the existing Osmania General Hospital complex. A petition has been signed by more than 13,000 people with a plea to save OGH. Raghu Cidambi motivated a lot of people to sign the petition. Amarbir Singh, who counts notes and tallies balance sheets during the day, stresses that saving OGH should be our most primary collective concern and focus. Historically and as an identity of Nizam era Hyderabad, I need not stress further on the importance of this structure.

Prof. Salma Farooqui suggests that a dialogue needs to be started with the state government impressing upon them the importance of preserving a heritage structure like OGH in the historical city of Hyderabad. She says that the city is a shared space both by the executive and citizenry. Health infrastructure and heritage can go hand in hand. It should be looked upon as a merged sphere rather than segregation of these components. Raghu Cidambi says that that the Telangana State government has been directed to file a status report in the Public Interest Litigation (PIL) in the OGH case. The case is posted to 8th July 2021. All said and done, no Hyderabadi is against the construction of twin towers at Osmania General Hospital but without demolishing the existing heritage complex. Engineer- conservationist Sajjad Shahid looked at the entire scenario of perishing heritage thus: