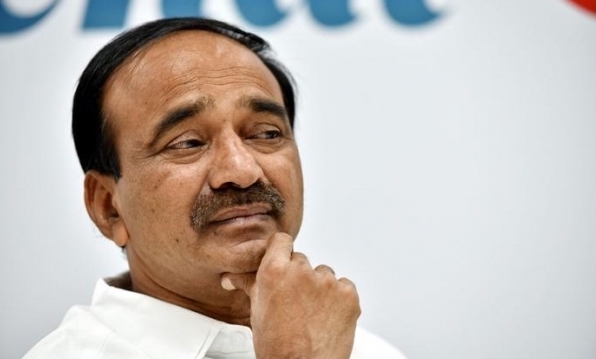 It seems it is going to be a hot monsoon in Telangana. It may be hot politically in the days to come. Telangana State’s Health Minister ‘Eat’ala Rajender’s political health suffered and he was unceremoniously kicked out by Chief Minister K. Chandrasekhar Rao (KCR) from the State cabinet after KCR received reports of land encroachment by a hatcheries company belonging to Jamuna, wife of Rajender. The pint-sized political dynamite Rajender denied the charges and dared to take on the Telangana Rashtra Samithi (TRS) founder president K. Chandrasekhar Rao by leveling counter-allegations against KCR of many misdoings in the past seven years.

Rajender is playing the victim card. He does not answer why he remained silent for all these years and chose to attack KCR only after his fallout from KCR’s grace. He resigned from the Telangana State Legislative Assembly on Monday paving the way for a bypoll in his Huzurabad Assembly Constituency. Before this, he hobnobbed with political animals of various hues to look out for greener pastures. Ultimately, Rajender bared his saffron underwear and went to Delhi, where he was grilled by the Bharatiya Janata Party (BJP) high command about his alleged ‘misdeeds.’ Rajender reportedly tried to make a hard bargain like protection from the Central Bureau of Investigation (CBI), Enforcement Directorate (ED) and other central agencies. He also reportedly pleaded for a berth in the central cabinet and to make him the BJP’s chief ministerial aspirant for the next Assembly polls in Telangana. He pestered the BJP leadership for Z plus security for him. He is reportedly assured of a Y category security.

After burning its hands in West Bengal with the Suvendu Adhikari experience, the BJP is extremely cautious in pitting Rajender against KCR, whose TRS has supported the Narendra Modi government during voting in the passing of many Bills. The BJP is not sure of the explosive potential of the little dynamite Rajender. After the municipal polls to the Greater Hyderabad Municipal Corporation (GHMC), KCR met Prime Minister Narendra Modi and reportedly bowed before him seeking not to disturb his government in Telangana State. Since then, he has been making all the right noises for the BJP. KCR did not appoint a single Muslim as a member of the reorganized Telangana State Public Service Commission. He did not appoint a single Muslim as vice-chancellor among the recently appointed vice-chancellors in the state. KCR is also keeping his options open of going with the BJP in the next Assembly polls. But that is for the future if he can politically crush his follower-turned-foe Eatala Rajender.

The BJP wants to test the fire power of Eatala Rajender, who is trying to project himself as the leader of the backward classes and other lower castes in Hindu society. The question is: Will ‘Eat’ala Rajender’s Ghotala (land scam) come to bite the BJP in Telangana?