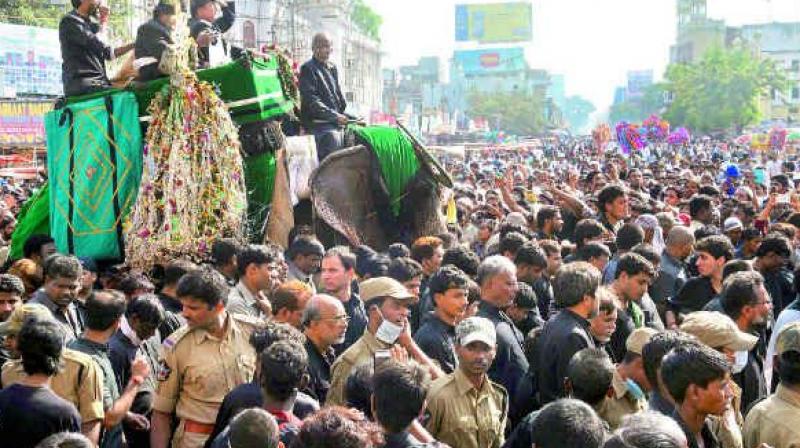 The martyrdom of Syedna Imam Hussain, the illustrious grandson of Prophet Muhammed (Peace Be Upon Him) and his companions at Karbala, Iraq, is commemorated on a gigantic scale in the Indian sub-continent. Lucknow and Hyderabad with significant Shia populations lead the way. This commemoration has become a part of Indian heritage and culture. It also promotes national integration and communal harmony as people cutting across religious divides take part all over India. It has strengthened Hindu – Muslim unity and Sunni – Shia brotherhood. A major Standard or Alam as it is popularly called is taken out in processions in different states. They are accompanied by smaller Alams with the mourners beating their chests or flagellating with small blades and knives. Elegy sessions (Majalis Marsiakhwani) are also held. Moharram stands out in Hyderabad. A grand Bibi ka Alam atop an elephant is taken out from Alawa BiBi in Dabeerpura, the old quarters of Hyderabad.

The Bibi ka Alam is part of a wooden plank on which Syeda Fatima Zehra, the noble daughter of Prophet Muhammed, was given the last funeral bath. This was gifted to the Qutb Shahi rulers in the 17th century by the nobles from Iran. The Shia Quli Qutb Shahi ruler assigned the responsibility of installing the BiBi ka Alam to Zainul Abedin Haider, a Sunni noble, who was appointed as the 1st Caretaker (Mujawer). This honorable and exalted responsibility has been carried out dutifully for the past 12 generations on my maternal side. Hazrat Mahboobuddin Abid was the 10th generation caretaker. Later, his son Aliuddin Arif (my double cousin), took over as the caretaker. He passed away about two years ago. Aliuddin Arif’s son Hassanuddin Aijaz, a young management graduate in his 20s, is the 12th generation hereditary Caretaker. Asif Bhai, Kashif Bhai, Hatif Bhai used to assist their brother Arif  Bhai, who now guide and assist the young Aijaz in the upkeep and management of Alawa BiBi.

Providing an elephant for BIBi ka Alam seems to have become an elephantine issue! Last year, citing the Covid pandemic, the Telangana State Government did not grant permission. So, the BiBi ka Alam was taken out in a DCM van. In the preceding year, Chief Minister K. Chandrasekhar Rao refused permission for elephants citing its ill-health. The then Caretaker Aliuddin Arif had to fetch the elephant from Karnataka. It may be recalled that the elephant for the Alam used to be provided by His Exalted Highness (HEH) the Nizam VII Mir Osman Ali Siddiqui Khan Bahadur and later by the Nizam Trust. For this year, the issue has not been resolved as to which elephant will carry the BiBi ka Alam.

It is learnt through Zakiuddin Hatif that permission has been granted to take out the BiBi ka Alam on an elephant. He also spoke to Syed Sibghatullah on the historical importance of the BiBi ka Alam.

The elephant Menaka which took part in the Bonalu procession this week had given some anxious moments the last time it participated in the Moharram procession due to its unfamiliarity with the route.

Chief Minister K. Chandrasekhar Rao should uphold the majesty of the grand and historical BiBi ka Alam by providing a permanent elephant for the procession and also keeping a standby in case of an emergency. The generous KCR allotted Rs.6,000 crores to buy and distribute sheep to the shepherds in Telangana. Why cannot KCR buy two elephants at a cost of just Rupees Two Crores for the BiBi ka Alam procession and the Miladnunabi procession? They can be stationed and maintained at the Nehru Zoological Park like the yesteryears. Where there is a will, there is a way. Yes, a way — even for the elephants!