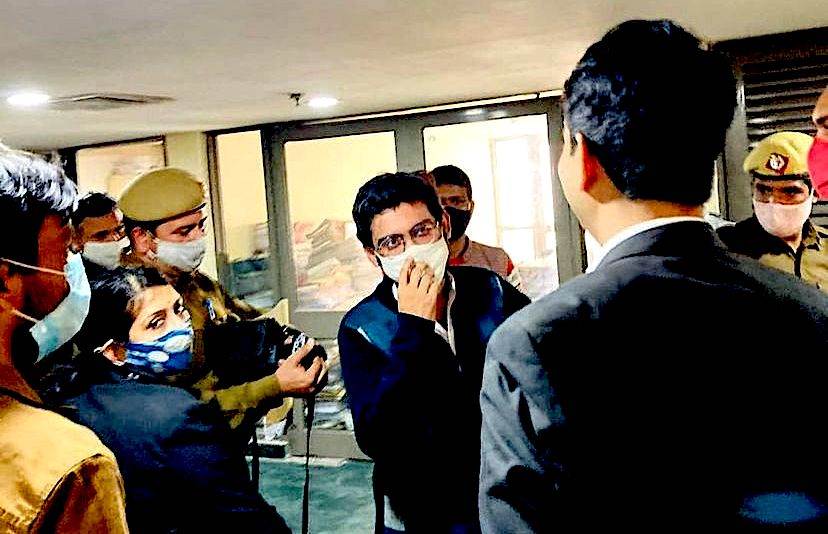 Courage isn’t having the strength to go on – it is going on when you don’t have strength.

The story of David & Goliath is a biblical one. David was a boy with just a small sling who came forward to fight Goliath, the giant. How he got the courage to fight an armed and armored giant, all because he had faith that for him being truthful and honest, even gods would be on his side. With this faith, he defeated Goliath with just one shot from his sling. In the current context, the Indian State is the Goliath that is hellbent on killing all the voices of dissent and Sharjeel is the David who is always scrupulous about his words and vision.

“When are you coming back to the capital Sharjeel, I am eagerly waiting to sip a cup of tea at Yadav’s tea stall together,” I asked Sharjeel.

“I would be coming back in a day or two. Did you see how a section of right-wingers have cherry-picked a minute video from my hour-long speech and are demanding my arrest”, he replied. It was the last time when I was having a normal conversation with Sharjeel about two days before he surrendered to the Delhi Police on January 28, 2020. He was berated and named in First Information Reports (FIRs) filed by five Indian states – Arunachal Pradesh, Assam, Delhi, Manipur, and Uttar Pradesh – for giving speeches at AMU and Jamia Millia Islamia.

He was also booked under several sections of the UAPA (Unlawful Activities Prevention Act) and, among others, under Sections 120B (Criminal conspiracy), 121A (Conspiracy to commit offences of waging war against India), 124A (Sedition), and 505 (Statements conducing to public mischief) of Indian Penal Code.

I would often ask myself this question as to why is Sharjeel Imam still languishing in prison for over 600 days. Is it because of the reason that he called for a Chakka Jaam or road blockade and surprisingly his fervent words were not only limited to some text but he showed it in a practical way by organizing the Shaheen Bagh protest site? The site continued for over 100 days and it remained peaceful throughout as a testimony to the peaceful constitutional spirit with which it was organized. Chakka Jaam is not a new strategy.

In 1919, almost a century back, Mahatma Gandhi planned and organized a Chakka Jaam against Rowlatt Act that resulted in a complete disruption of rail and road network, large-scale violence, and anti-British protest in Punjab. In 1974 George Fernandes organized one similar Railway Chakka Jaam when the Indira Government failed completely to address the pathetic issues faced by railway workers.

So Chakka Jaam is not a new strategy. Every Chakka Jaam has two distinct similarities, a shameless and fearsome authority who behaves like Goliath and is insensitive to the issues faced by others and there is a person like David who despite being under-armed, stands against the injustice and oppression. Over the past year after Sharjeel’s incarceration, the capital has seen a lot of protests and slogans, even calling for an open genocide of Indian Muslims. These people are not in jail, so definitely Sharjeel is not in jail because he riled the sentiments of the State through his words.

Is he in jail because he had some role in the Delhi riots? Well, he surrendered on January 28 while the riots began on February 23, 2020. The actual instigators of the riots like Kapil Mishra & Ragini Tiwari are still roaming free. Also, it was not a riot as falsely claimed but a full-scale anti-Muslim pogrom.  More than 80 percent of deaths, 90 percent of property loss were from the Muslim side. So, he definitely has no role in the pogrom and is not in jail because of it.

He is behind bars for more than 600 days because he asserts his identity and has the courage to look into the eyes of the Islamophobic state and removes the fake drape of secularism and morality under whose garb, Muslims are being made a sacrificial goat. He is certain that a visible religious diversity is totally compatible with the secular realm and as a reason, he is not ready to shed his Muslimness to appease anyone. To quote Shakespeare “Something is rotten in the State of Denmark” and he showed how rotten the Indian State has been when it comes to Muslims. He argues that the so-called nationalists are nothing but diabolical forces masquerading in the fake drape of secularism. How can a State tolerate its vicious hidden agenda being plummeted and ignominy? The brute response and his incarceration were inevitable.

As long as Sharjeel is in jail, a part of us is in jail too but a false narrative and a fictitious story, how fervently proclaimed don’t remain forever. It is bound to obliterate and similarly, leaders like Sharjeel, Umar & others would soon be free from the prison of the State. Would they be totally free, the answer to it is iffy.

The prison doesn’t always necessarily mean a physical barrier. There are two types of prisons, a prison by the state and prison by the society. Sharjeel, Umar & other leaders would be released from the state prison but for how long they would be imprisoned in the societal prison is a question. We have seen a number of cases where innocent Muslims were released from state prison after spending decades of their youth but they never were freed by the societal prison.

Society even knowing that the charges on them were fabricated, even was sympathetic to their pain & sufferings, never accepted them with complete free will. Society is afraid of the fake anti-national tag that the state has put on the voices of dissent. So, when our leaders get back, we should not punish them from our side too.

Be it Sharjeel, Umar, Meeran, Gulfishan, Khalid Saifi, or a number of other anti CAA leaders who were incarcerated and are currently languishing in jails, the Goliath State may imprison their body but their spirit to fight the injustice, the alacrity to stand against oppression, the purity of intentions, the honesty of words and action and their free will can’t be imprisoned.

The obdurate authority should learn from its mistakes and if it keeps ignoring the warning signs, it will be, quote an American slave song- no more water but the fire next time.

(Aasif Mujtaba is an alumnus of IIT Delhi and AMU. He was one of the organisers of Shaheen Bagh anti-CAA protest. He is also the founder of Miles2smile Foundation.)