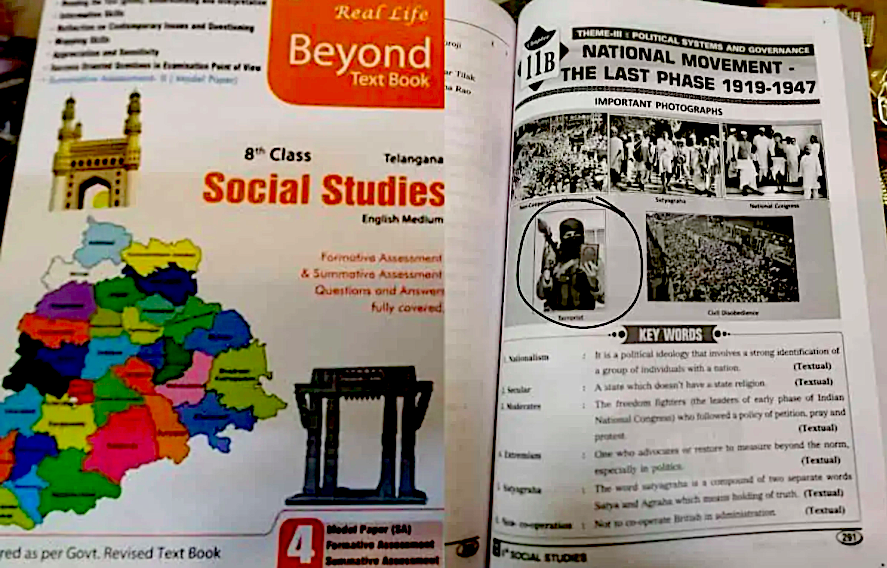 A social studies study material meant for class 8 students in Telangana has agitated the minds and hearts of Muslims for portraying the image of a terrorist holding a gun in one hand and the Holy Quran in the other. The despicable and controversial image is a part of a series of other images present in a chapter titled ‘National Movement – The Last Phase 1919-1947’. It is significant to note that while the remaining images portray Indian freedom fighters like Mahatma Gandhi and Jawaharlal Nehru as resisting the British empire’s rule, this image stands out for Islamophobia and hate campaign.

The picture of the “terrorist” not only does not fit in with the rest of the chapter but also shamelessly clubs Islam and terrorism as one and the same. This perverted portrayal compounds the problem in the sense that the front page of the study material reads “prepared as per government revised textbook.”

A student activist from Hyderabad, Shaikh Aslam was the first to point this out from his sibling’s book. He opined that this humiliates the Muslim students, teachers, and the community, and it will also lead to the destruction of unity and integrity of the country. He demanded immediate action against those writing and approving this book. The controversial study material in question has been published by VGS Publishers housed at Nimboliadda, Kacheguda.

It is significant to mention that VGS Publishers is located in an allegedly notorious right-wing and communally sensitive area. VGS Publishers prepared the same based on recommendations given by the state government. 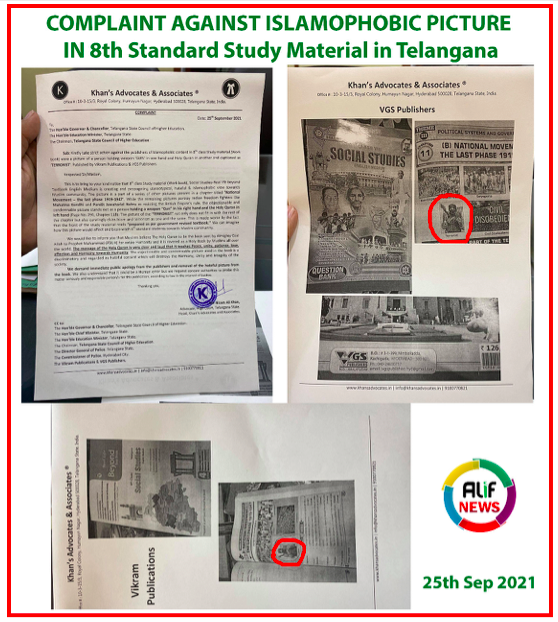 Dr. Talha Fayazuddin, state president of Students Islamic Organization (SIO) analyzed that the 8th class social studies study material is creating and propagating stereotypical and hateful views towards a specific community. “ Showing a person holding a ‘gun’ in his right hand and the Holy Quran in the left hand is discriminatory and hateful content which destroys harmony, unity, and integrity of the society, he lamented. The SIO has demanded that the Telangana Education Ministry take immediate action against such irresponsible and ‘propagandist behaviour’ and warned not to approve such distracting content.

Historian Dr. Mohammed Safiullah sharing his views with Beyond Headlines presented his balanced views about what went wrong and how it could have been avoided:

“Before prescribing these books as part of the school curriculum, a thorough review of the relevant images should have been done as a part of standard procedure. A representative image representing a so-called Islamic terrorist holding the Holy Quran is uncalled for and in very bad taste and gives a wrong impression to the young minds who are going to follow the book as part of the course. The image tries to convey the message that the person shown is a Muslim terrorist, which is absolutely wrong.”

Meanwhile, the issue has snowballed into a major controversy and a big embarrassment for the KCR Government, which is seen to be on the same page as the other right-wing Islamophobic state governments. The right-wing narrative is to deny history, twist, and change to suit their hateful agenda and divide the country. The ‘terrorist image’ is bound to rock the Telangana Legislative Assembly, which is in session.

Legal luminary Shafeeq Rehman opines that the Publisher, approving body, and the author can be held responsible and prosecuted for showing disrespect to the Holy Quran and allegedly depicting that Muslims are terrorists.

Information Technology (IT) expert and gulf-returnee Mohammed Amjad has demanded that the culprits coloring the young minds with Islamophobic content be dealt with strictly as per the law. He hoped that our children will be taught love, compassion, and values to strengthen our secularism and democracy. He has asked for ‘refresher courses’ to be given to the ‘content approving authority’ and to purge it of the right-wing elements. He said only love and not hate should guide us.

The matter has reached the Hon’ble Governor and Chancellor Tamilsai Soundararajan,  Hon’ble Chief Minister K Chandrasekhar Rao, Education Minister Sabitha Indra Reddy, Telangana State Council of Higher Education, the Director-General of Police Mahender Reddy, Hyderabad Police Commissioner Anjani Kumar, and the controversial VGS Publishers. In a letter to the above persons and institutions, the Hyderabad-based Khan’s Advocates and Associates have demanded a public apology from the publishers and removal of the hateful picture from the book, according to Alif News.

This is a sensitive issue. Anything derogatory or Islamophobic about Islam, Holy Quran, and the Noble Prophet Muhammed (Peace Be Upon Him) will not be tolerated by about 2 billion Muslims across the world. What will the Telangana Rashtra Samithi (TRS) government gain by promoting Islamophobia in the tender minds of school-going children? Is this the “ Bangaru Telangana” (Golden Telangana) of KCR Garu’s dreams where peace is disturbed and development takes a back seat? Having personal family relations with KCR Garu during the past two decades, I am distraught that this Islamophobic blot on KCR Garu’s government is not easy to wash. I fondly recall you gracing our family weddings and your long association with my cousin Dr. Hameed ur Rahman. KCR Garu, we still have your photo of a wedding in our family, prominently displayed at my uncle’s farmhouse in Peddapur. Let the sweetness of our relations remain!

KCR Garu, the least you can do to assuage the feelings of the Muslim community is to dismiss Education Minister Sabitha Indira Reddy as she put your government in an embarrassing position by not monitoring what is being published. It is difficult to believe that she was the life partner of a secular leader Indira Reddy Garu. She has been getting the bulk of Muslim votes in her constituency all these years and winning comfortably!

KCR Garu, enactment of a new strict law about protecting the Islamic symbols must be put before the present Legislative Assembly Session. Please explore with legal experts about the possibility that: Anybody, pedaling Islamophobic content and showing disrespect to Islam, the Holy Quran, and the Noble Prophet Muhammed (PBUH) must be executed by the court of law at a public square or a minimum sentence of 30 years rigorous imprisonment must be provided in the new law and their property be taken away by the state. Meanwhile, book the VGS Publishers, author, and the persons in the ‘approving authority’ under the National security Act (NSA) and treat the matter as waging war against the state. Only then we can strengthen peace and harmony in our Bangaru Telangana and our beloved country.

KCR Garu, who understands better than you the Hindu concept of accepting different modes of worship to reach The Truth.

Truth is One and there are different ways to reach it.

The Holy Quran says that: “There is no compulsion in religion” and “unto you your religion.”

Let us celebrate the diversity and unity of our great country!