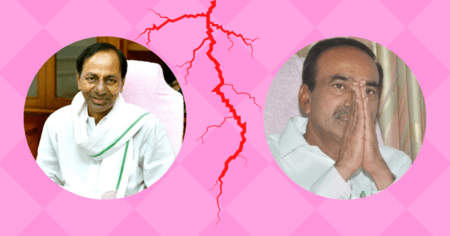 The Huzurabad by-election was necessitated by the resignation of Eatala Rajender, who was kicked out as health minister in the Telangana Rashtra Samithi (TRS) government amid allegations of corruption and land encroachment. The election is scheduled to be held on 30th October and the result will be announced on 2nd  November as to who will be the new Huzur (Lord) of Huzurabad?  After his humiliating sacking, Rajender joined the Bharatiya Janata Party. He is seeking re-election from his home constituency. The TRS and the Congress have fielded leaders from their student organisations – Gellu Srinivas Yadav and Venkat Balamur respectively. They belong to the Other Backward Classes (OBC).

The constituency is witnessing a triangular contest involving the TRS, the BJP, and Congress. Though the state’s next assembly election is still about two years away, the outcome in Huzurabad polls will help the opposition parties build an anti-TRS narrative. At the same time, a victory will help the TRS president and Telangana Chief Minister K Chandrasekhar Rao (KCR) tighten his vice-like grip over the party. It may possibly quell any possible revolts within the TRS in the near future at least. It may be recalled that KCR made a visit to New Delhi last month to meet Home Minister Amit Shah. According to sources, KCR pleaded with Amit Shah to help TRS retain the Huzurabad seat by downplaying Rajender. In return, KCR promised to help the BJP in Lok Sabha and Rajya Sabha during voting for any crucial bills that may come up in the future. After this alleged deal, KCR is taking it easy.

Despite the deal, if TRS loses the polls, it is not likely to matter in the larger picture. The TRS has cobbled up a brute majority in the 119-member assembly, with 102 MLAs. The TRS had won 88 seats in the state’s 2018 assembly election but managed to inflate its strength in the Legislative Assembly by engineering defections from the opposition parties, mainly the Congress. Congress legislators have turned out to be soul sellers and traitors all over the country by winning on Congress tickets and bartering their souls to the BJP for money and power.

Playing to the script by Amit Shah, the BJP cadres will either vote for the TRS or absent themselves from the booths much to the discomfiture of BJP candidate Rajender. The BJP top leaders are allegedly telling their party cadre not to go out of the way for Rajender’s victory and antagonize KCR, their likely alliance partner in the 2023 Telangana Assembly polls. They have made it clear that the BJP has just provided an ‘umbrella’ to Rajender, who should not expect more than refuge under the BJP umbrella. So, Rajender will be the sacrificial lamb for the BJP. Rajender will have no option but to lick his wounds. He knows he cannot withstand the double whammy of TRS and BJP if he leaves BJP. The ED, CBI, NIA, etc may also be knocking on Rajender’s doors apart from the Telangana Police if he tries to grow wings.

The Congress has a significant presence in Telangana in terms of organisation, cadre, leadership, and votes. But the BJP is a party on the fringes. It is by and large limited to North Telangana. The results in the recent urban local body polls have pointed out the ground realities. The TRS secured about 40% of the votes polled while the Congress bagged 24-26 % and the BJP lazed around with a meagre 14%. After an exodus of its soul-selling lawmakers and leaders to the TRS, many considered the Congress as fading into irrelevance in Telangana. But under the leadership of A Revanth Reddy, the party is showing some muscular signs of gaining ground and trust of the people. Huzurabad polls will give it an opportunity to demonstrate this in full measure. It is time for Revanth to impress Sonia Gandhi.

KCR has dished out a mammoth direct cash transfer scheme called ‘Dalit Bandhu’ to woo the Dalits. The scheme, which provides a transfer of Rs 10 lakh to each Dalit family, was abruptly stopped by the Election Commission of India due to the by-elections in Huzurabad. KCR – the farmhouse chief minister as he is notoriously called has tried to play the caste card. Consequent to this, the TRS government has announced a quota for OBCs in the allotment of bars, wine shops, restaurants, etc. The OBCs in the constituency are believed to number 20,000-25,000 votes. The TRS is also depending on the existing welfare schemes that have been dangled to Yadavas, Mudiraj, and Padmasalis. These communities make up a sizeable chunk of the voters. The OBC voters are expected to dominate the election. The BJP has the advantage on paper that both its candidate – Eatala Rajender – and its state president – Bandi Sanjay Kumar – belong to the OBC communities.

The 3-time MLA Rajender started his political career as a leftist. The BJP cadres are wary of Rajender’s intentions. The Hindutva organizations show no confidence in Rajender. The BJP on its own has been a relatively marginal player in Huzurabad. It just bagged a laughable 1,683 votes in the 2018 assembly elections – fewer than the votes polled by NOTA. However, Bandi Sanjay, who was elected from the Karimnagar Lok Sabha constituency, under which Huzurabad falls, was able to muster over 26,000 votes in this segment due to hateful polarisation.

So, the BJP and Rajender are piggy riding each other in Huzurabad. If Rajender had any inkling of the BJP’s internal sabotage and the Amit Shah – KCR deal to outwit him, Rajender would not have contested as a BJP candidate.

The question is: Who will be the Huzur (Lord) of Huzurabad on 2nd November?