Politicians are like loose canons. Telangana Chief Minister K Chandrasekhar Rao (KCR) is no different! Smarting from a humiliating defeat at the hands of the Bharatiya Janata Party (BJP) in Huzurabad Legislative Assembly seat last Sunday, KCR, who usually presents a calm demeanour, lost his cool at the State BJP leaders and warned them thus:

“For your petty politics, with your stinky mouth, you’re talking as you wish. We will cut your tongue into four pieces. KCR will not tolerate if you speak against the people of Telangana. I won’t mind if you abuse me, but if you wish to cheat the farmers of Telangana and destroy the state’s economy, we will not allow this,” KCR warned Telangana State BJP president Bandi Sanjay Kumar. However, KCR did not disclose as to what he will do with those four pieces of the tongue, Whether the four pieces of the tongue will be preserved in a communal museum or gifted to a Nathuram Godse Memorial. 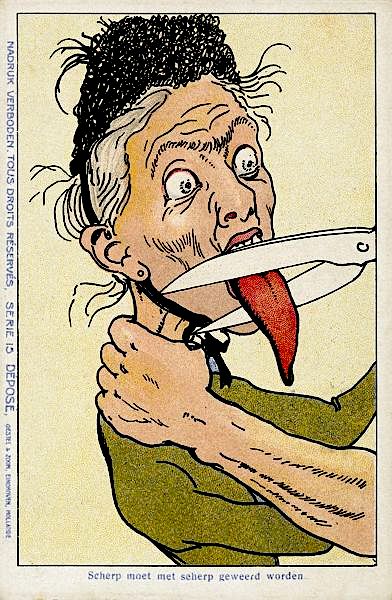 KCR slammed the state BJP leaders who announced agitational programs against the TRS government for discouraging farmers not to go for paddy cultivation this Rabi season. He blamed the Union government, which is not willing to procure paddy from the state. Speaking to the media in Hyderabad on Sunday evening, KCR claimed that the ruling TRS government has not increased VAT on petroleum products and the question of reduction does not arise. “The cess on petrol and diesel should be withdrawn. We will not allow you to rest (until the NDA government does that). The entire paddy grown in Telangana should be procured by the Union government. The state BJP leaders should stop making hollow statements. They need to make the Union government agree to this and get orders accordingly,” KCR demanded.  Alleging that the Telangana BJP leaders are claiming they would file cases against him and send him to prison, KCR dared the leaders to touch him! KCR seems to be rattled by the corruption charges as he has seen the fate of the opposition leaders, who went against the wishes and command of BJP leader Narendra Modi, on whose tune the CBI, ED, Income Tax Department, and other central agencies dance.

KCR claimed that though the international crude prices are still hovering at a lower range, the Union government in the name of cess inflated the fuel prices, thereby burdening the common man. According to KCR, the international prices of petrol never touched USD 105 per barrel after 2014. Despite this, the Central government increased the prices.

“We have not hiked VAT. We have not increased even a paisa so the question of reduction does not arise. Ever since the TRS government was formed, VAT has not been increased. Which fool will ask us to decrease (VAT)? The fool who increased it will have to reduce it,” thundered the Chief Minister.

We will continue to fight. We will hold dharna for withdrawing cess on petrol and diesel, he disclosed. “These people are lying about the international (crude) prices. They are imposing cess so that it would not come under the divisible pool. It is burdening the common people. They are evading states devolution,” the Chief Minister charged at the Modi government.

It may be recalled that, for the past several days, the Telangana government has been requesting the farmers not to go for paddy cultivation this season as the Union government is reluctant to buy the commodity. We will raise the issue (paddy procurement) in Parliament. We will also hold dharnas in districts. If the need arises MPs, MLAs, MLCs from Telangana, including Chief Minister, will hold a dharna in Delhi, KCR warned.

The Chief Minister KCR recalled that the Telangana Agriculture Minister requested farmers to give up paddy cultivation in view of the Union government’s lackadaisical attitude to procure paddy. KCR expressed solidarity and clearly said that his party would also support farmers’ agitation in the north and would not allow the Union government to rest until those ‘anti-farm laws’ (three new agricultural laws) are withdrawn by the Modi government.

When KCR visits Delhi, bows to Narendra Modi and complains about the State BJP leaders, Modi reminds him through Mohammed Rafi’s soulful melody that the entire nation knows about the bonhomie between Modi and KCR: