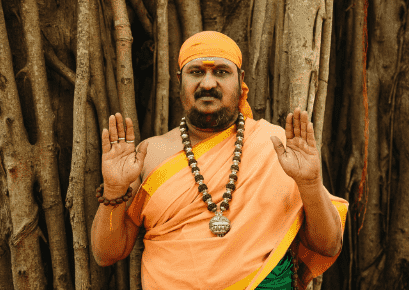 A Chennai-based Hindu priest Sathya Narayanan @Guru Nannu Baba and his accomplice wife Pushpalatha were arrested by city police on December 18, for allegedly raping a woman since her teenage years and also for impregnating her. Police said that the priest had continued to rape the woman after her marriage in 2018. He allegedly threatened to leak her photos online or send them to her husband if she complained about her ordeal.

The accused couple, Sathya Narayanan and his wife Pushpalatha have been running the Shirdipuram Sarva Sakthi Peedam Trust at Vinayakapuram in Chennai since 2012. According to the police, the complainant who lodged a case at the women’s police station said that the victim was 16-years-old and was staying at her grandmother’s house when the accused Sathya Narayanan first raped her with the help of his wife. The FIR copy states that priest Sathya Narayanan claimed to “free the victim of her sins” by raping her. The crime committing priest is not ‘free of his sins’ now!

According to the FIR, on April 12, 2016, the victim had gone to the Trust to get some sacred ash (Thiruneeru), where she was allegedly offered a glass of juice by Pushpalatha. “I fell unconscious after drinking the juice. A few hours later, I regained consciousness, and I found myself naked while Sathya Narayanan and his wife Pushpalatha were sitting nearby. They had taken my naked pictures and warned me not to speak of the incident,” the victim disclosed to the police. The victim shifted from the location. She got married in 2018 when she was 18 years old. The police said that the accused Sathya Narayanan had contacted the woman in March 2020 again and had raped her multiple times. Guru Naanu Baba allegedly impregnated her in July 2020. The FIR quoted the victim, “Knowing that my husband worked abroad, the priest insisted I visit him in March last year. When I resisted, he threatened to send the pictures to my husband. The couple also insisted that I abort the baby.”

The Madhavaram All Women police registered a case on Saturday morning and took the accused couple – Guru Naanu Baba and his wife Pushpalatha in custody on the same day. Criminal Cases have been booked under IPC Sections 328 (hurting the person with use of poison or drug), Section 506 (ii) (punishment for criminal intimidation), Section 376 (rape charges), and Prevention of Children from Sexual Offences (POCSO) Act and its Section 5 (f) (penetrative sexual assault), Section 11 (threatening with photos) and Section 17 (punishment for abetment). The police is also investigating whether Guru Naanu Baba violated other young boys and girls as his Shirdipuram website carries pictures of young girls and boys who lined up for a ‘black magic’ cure.

From Asaram to Guru Naanu Baba, the so-called Hindu godmen have taken fancy to young and tender 16-year-old girls and go past their forbidden territories at will. What is disgusting is that the wives of these sexual predators were accomplices! If women cannot protect girls then we are surely in the Kalyug! They pile up physical and mental agony on the helpless children. Things will not change for the better unless the Indian society learns to protect and respect the girl child. Dogmas need to be sent crashing into the trash bins. Godse Rajya is being unleashed for the past seven years. There seems to be no respite!

“FOR HE WHO ENTERED SHIRDIPURAM, BABA NEVER FAILED TO CHANGE HIS FATE,” says the end of Guru Naanu Baba’s introduction on the website. No doubt! He has changed the fate of the helpless 16-year-old girl for the worst!