I read this novel recently and have since felt compelled to write a review. This is about a turbulent time in North Bihar, India in the eighties, but is strangely and frighteningly contemporary.

It starts with the main protagonist, a young man named Shiv, who moves from his village to the nearby city of Bhagalpur for higher education. He has limited means and lives in students’. He is intelligent, hard-working, honest, liberal, and a diehard optimist. Shiv sees around him inadequate and dishonest governance at many levels. When he joins pre-university, there had already been notorious incidents, when police made criminals blind in order to curb them.

Shiv passes with flying colors and befriends an equally brilliant Zarina at university. A few like-minded youngsters from diverse religious, economic, and linguistic backgrounds join them. This group studies hard and works harder towards improving the lives of the marginalized people of Bhagalpur. They provide free tuition to children, help solve the daily problems of students and the poor, stage street plays to raise awareness, and serve at Gurdwara, etc. Shiv and Zarina become emotionally close and are supported by the friends’ group. When the couple commits to each other, they do so in the library, keeping the ‘Great traditions of learning’ as witnesses. I was blown away by this unique description!

Shiv’s rural community had always been openly hostile to mixed-religion marriages, so he couldn’t share this news with family. Zarina’s father was accepting, but her mother wasn’t. This band of forward-thinking youth keeps doing good work, at university and in society. The young lovers progress in their relationship; their emotional exchanges are heart-warming. 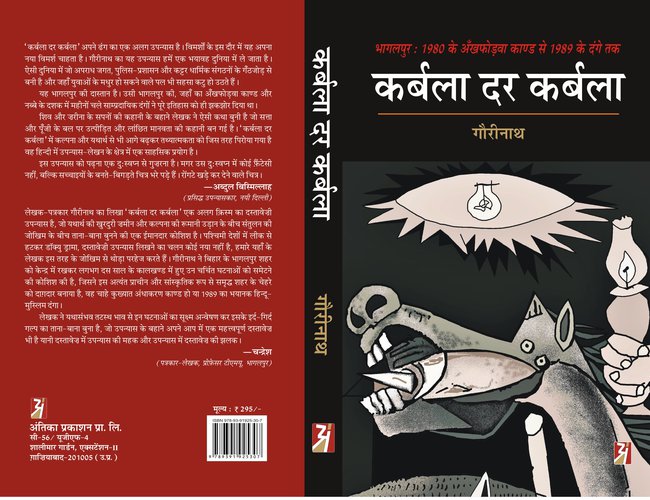 Poor governance becomes even more reckless and fragmented. Communal hatred is built up slowly and systematically. Eventually, riots between majority and minority religious groups break out on a large scale. Throughout the riots much violence and destruction occurred, leading to major damage to people of the minority religion. Later, riots spread far and wide in the area. Police remained non-interfering and even supportive of rioting mobs. The protagonists’ lives get shattered beyond comprehension in the aftermath of wanton violence. It takes years to come to terms with losses. Some losses become permanent.

All along with this story, Gourinath provides vivid and evocative details of actual sordid happenings. The 1984 riots following the PM’s assassination also features briefly. There are details including hidden workings of political forces, certain social organizations, and law and order. Throughout the book, reliable news sources are mentioned. There is also a selected bibliography in the end. The events in the novel took place more than 30 years ago and therefore may be understood as modern historical fiction. The description of that period is clear and colorful, and the narration is free-flowing. Dialogues are crisp but perhaps overly poetic at a few places. The language conveying all this is strong, incorporating dialogues in Maithili, Punjabi, and Bangla. Chapters have thought-provoking titles that help build the narrative.

There are smaller stories interwoven with the main narrative; of deep-seated communal prejudices; of Shiv’s morally bankrupt father and brother; of generous fellow students from the minority religion; of symptoms of recent and earlier trauma; of callous and unscrupulous academia; and last but not the least, of a hidden little fairy tale. These have added to the richness and diversity of the book. The prose is interspersed with poems from Hindi, Urdu, Santhali, and other languages, which make interesting reading. Mr. Gourinath is an established author well versed in many languages and cultures. He provides lively descriptions of many historical, literary, and cultural issues. In particular, he speaks a lot of the Bengalis of Bhagalpur. This last point is especially special for me, a Bengali of Banaras!

The city had earlier been a linguistic and cultural melting pot. The story speaks of the decline in its social and communal harmony in the given period. This novel is a tour de force. It transcends geographical as well as temporal boundaries and becomes a timeless account of the badly governed Third World.