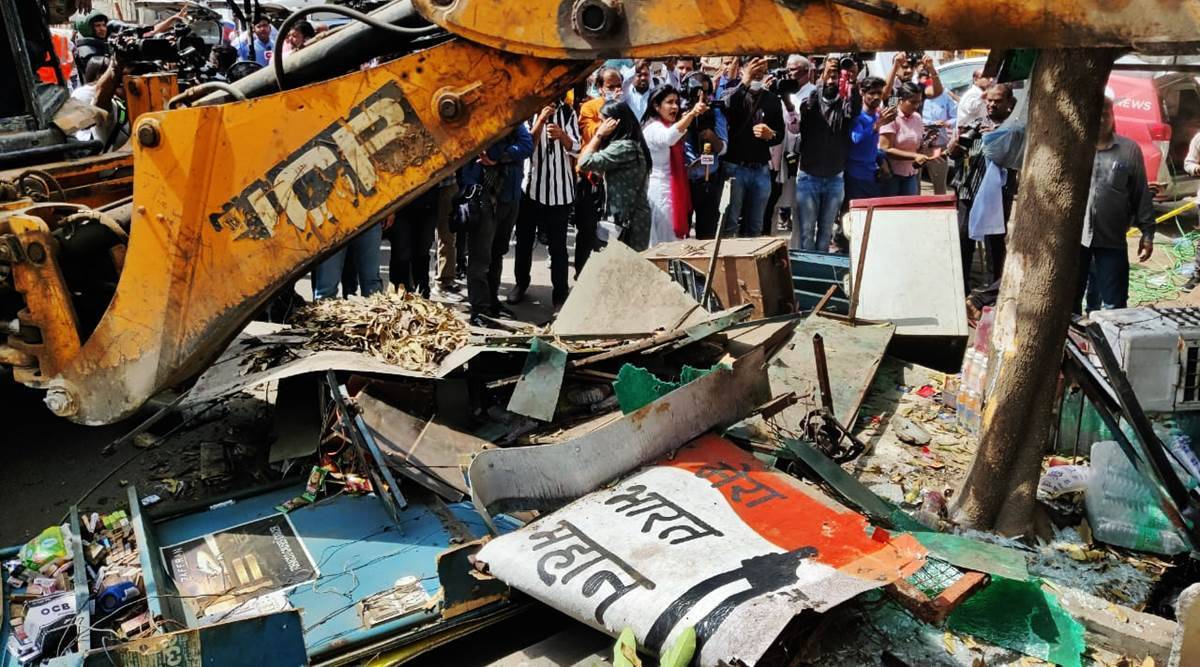 The illegal Shobha Yatra was taken out in Jahangirpuri without police permission and the rioting by the Hindutva extremists passing through Muslim neighborhoods has put the national capital New Delhi on the boil. The next day, the Bharatiya Janata Party (BJP) Delhi unit president Adesh Gupta sends a letter to one of the municipal corporations in Delhi to bulldoze the ‘rioters houses and shops.’ The message was clear to the municipal employees, who armed with thousands of policemen to provide them security, went on a rampage by bulldozing houses and shops of innocent Muslims accusing them of participating in riots and stone-throwing at the illegal procession. The Supreme Court’s orders were flouted for two hours and there was an unabated rampage in the name of clearing ‘encroachments.’ According to the victims, no notices were given to them before the destruction of the houses and the roadside shops. Many of the arrested persons houses and shops were targeted for destruction. No time was given to take away the valuables from the destroyed properties.

The BJP governments at the Centre and in the states have copied highhandedness and ethnic cleansing measures adopted in Israel and Myanmar, where Muslims are uprooted from their properties as a collective punishment for sins they have not committed. The bulldozing disease that started in Uttar Pradesh has spread to other states and the national capital. The ultimate aim of this destructive exercise is to leave no trace of residential proof of Muslims to deprive them of voter identity cards and take away their voting rights. The BJP rebel and Mossad’s blue-eyed boy Subramaniam Swamy had initially floated the idea of depriving Muslims of their citizenship. Now, the exercise is in full motion. The Hindutva ultra extremists and their bosses in the ruling establishment claim that the houses of ‘Bangladeshis and Rohingyas’ are being bulldozed in Jahangirpuri. In this case, a big question mark arises on the policing and security measures adopted by Home Minister Amit Shah. Why is India’s security compromised by allowing Bangladeshis and Rohingyas in the national capital? In other words, it is acceptance of failure by the Narendra Modi-led BJP government that the national capital is swamped by outsiders!

The BJP has an axe to grind and as part of revenge politics, it does not want to tolerate seeing any residents of West Bengal moving to the capital New Delhi after the Bengalis kicked out the BJP from West Bengal. The wise Bengalis handed over power to the Trinamool Congress leader Mamata Banerjee yet again in the recently held West Bengal Legislative Assembly elections. A large number of Bengalis doing menial work inhabit Jahangirpuri. A majority of them are Muslims. This was enough for the Hindutva hate brigade to unleash their terror by using the government agencies and bulldozing the one or two-room houses of the poor Muslims. The B-team of the BJP – the Aam Admi Party (AAP) made a common cause with the BJP by accusing the Jahangirpuri residents of being Bangladeshis and the Rohingyas. The Congress as usual was not seen on the ground.

It is a matter of grave concern that calls for genocide and ethnic cleansing are made in Dharam Sansad after Dharam Sansad. References and calls are made to emulate Myanmar-like ethnic cleansing in Haridwar Dharam Sansad. The saffron-clad extremists are either on bail or some of them not arrested at all. In another case, the Delhi police’s affidavit claiming that no hate speeches were made at the Hindu Yuva Vahini event shocked the judiciary.  The speech in question pertains to December 2021, when Sudarshan News TV editor and hate monger Suresh Chavhanke administered an oath to a group of people to ‘die for and kill’ to make a ‘Hindu Rashtra.’ If this is not hate speech, is it love speech?

“The affidavit has been filed by a Deputy Commissioner of Police (DCP). We hope he has understood the nuances. Has he merely reproduced the inquiry report or applied his mind? Is it your stand as well or the reproduction of inquiry report of Sub Inspector level officer?” a two-judge Supreme Court bench, comprising Justices A.M. Khanwilkar and Abhay S Oka, pointedly asked, according to LiveLaw.in.

The Delhi Police’s affidavit under consideration was filed in response to public interest litigation (PIL) moved by retired high court judge Anjana Prakash and senior journalist Qurban Ali, which had said there was an “open call for genocide of Muslims in order to achieve ethnic cleansing.” The call was made during the Hindu Yuva Vahini event in Delhi and Haridwar Dharma Sansad. The Delhi Police’s affidavit was specifically in response to the Delhi Hindu Yuva Vahini event, held at Govindpuri.

The DCP’s affidavit amounts to collusion and defence of the hate speech. The court should not condone the DCP’s serious collusion! The DCP should be dismissed and all the subordinate officers responsible for the collusion and lapse should be disbanded from service. As long as the police and other government agencies collude with the Hindutva extremists, there is no guarantee that there will be peace and harmony. The court should order an overhaul of the Delhi police and a new secular police force should be appointed through new recruitment. Many of the lawmakers from the BJP have criminal cases pending against them. They should not be allowed to participate in Parliament proceedings and they should not be allowed to participate in voting during the passage of important laws and bills till the disposal of all their criminal cases.

There should be a thorough cleansing of the political setup to stop the ethnic cleansing of our own citizens!