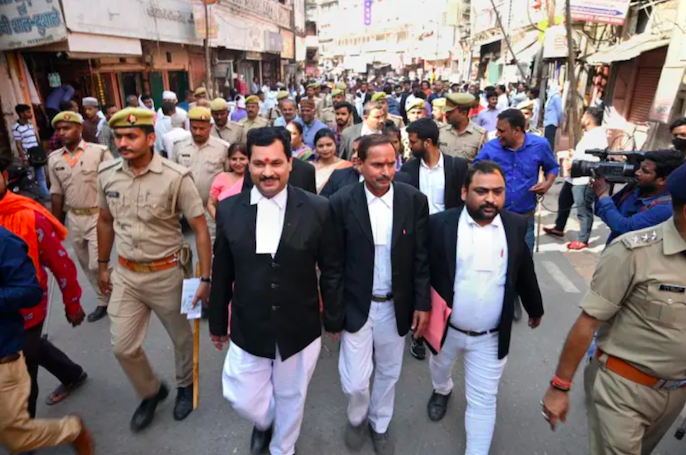 The All India Majlis Ittehadul Muslimeen (AIMIM) president and Lok Sabha member from Hyderabad Asaduddin Owaisi has criticised the Varanasi court for ordering a survey at the disputed Kashi Temple – Gyanvapi Mosque complex in Varanasi. Barrister Owaisi feared that the Varanasi court order for the survey could create the 1980s and 1990s type anti-Muslim Rathyatra bloodshed situation. He recalled that while passing the judgment in the Babri Masjid Ayodhya case, the Supreme Court had stated that the 1991 Religious Places Act protects the secular nature of our political system. According to the 1991 Act, there has to be a status quo about all the religious places as on 15th August 1947. Ayodhya case was made an exception.

Meanwhile, a day after the court-ordered video graphics survey of the disputed Kashi Vishwanath Temple-Gyanvapi Mosque complex began in Varanasi, the process had to be halted on Saturday after the Anjuman Intezamia Masjid Committee (Gyanvapi) filed an application in a local court seeking the replacement of Advocate Commissioner Ajai Kumar, accusing him of being “biased”.

It may be recalled that on April 8, Civil Judge (Senior Division), Varanasi, Ravi Kumar Diwakar had appointed Kumar as advocate commissioner to carry out the survey and directed him to “prepare videography of the action” and submit a report to the court.

The Varanasi court’s direction came on a petition filed by five Hindu women in August 2021 seeking an order to allow them to worship at the site. The matter will be heard by the court on Monday. An official of the Anjuman Intezamia Masjid Committee said, “When our objection is in the court seeking change of Advocate Commissioner, how can the same person head the commission which is conducting the survey.” Advocate Abhay Nath Yadav, who is representing Anjuman Intezamia Masjid Committee, said, “We have filed an application seeking a replacement of the Advocate Commissioner. On Monday, the matter will be heard by the court again where all parties, including the Advocate Commissioner, will present their side.”

The survey had started on Friday afternoon and was halted briefly after a group of lawyers representing the mosque accused Kumar of being “biased”. “Kumar didn’t act like a court-appointed official, and his behavior showed bias towards the Hindu side during the survey,” Yadav, who was present during the survey, told mediamen on Friday evening.

On 21 st April 2022, the Allahabad HC dismissed a petition filed by the Anjuman Intezamia Masjid Committee (Gyanvapi), challenging the local court’s order, which had ordered the video graphics survey. The Supreme Court must intervene in the matter and direct the Allahabad HC and also the Varanasi Court that the Varanasi case is governed by the status quo as on 15th August 1947. No court is empowered to change the status quo.

There is no ending to Hindutva extremists claiming mosques as temples and causing bloodshed and disharmony in our society. The Supreme Court must implement the 1991 Religious Places Act for lasting peace and brotherhood in our beloved country. The Bharatiya Janata Party (BJP) must not keep the communal cauldron boiling for petty electoral gains in the 2024 elections to Lok Sabha at the cost of the unity of our blessed nation!