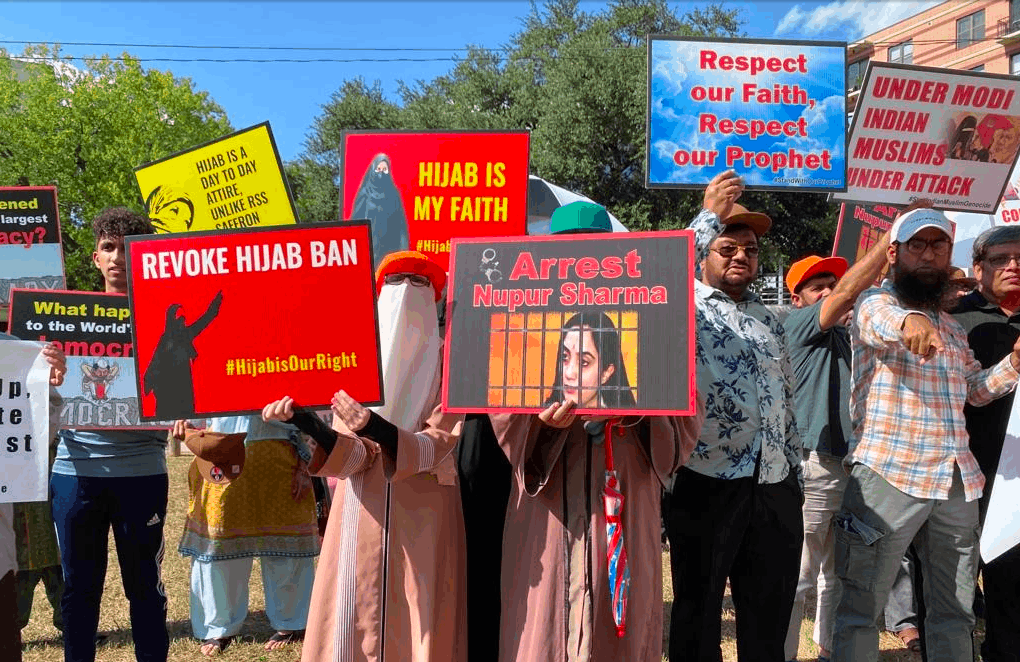 Washington, DC:  Hundreds of Indian Americans in Houston joined a coalition of Muslim community organizations in a protest against the recent human rights violations against Christians, Muslims & Dalits by the Indian government, as well as the insults by a member of the ruling BJP party toward the Prophet Muhammad (Peace be upon him).

The condition of Muslims in India has become appalling. The police and judiciary remain complicit to the Indian government’s brutal crackdown against its own Muslim citizens. In the month of June alone, Muslims in India have been killed, arbitrarily detained, and had their houses unlawfully demolished.

The President of Indian American Muslim Council (IAMC) Houston Chapter, Shakeib Mashood, said, “India is rapidly turning into a fascist state where minorities are facing humiliation and being harassed regularly. We call on the community to join our coalition protest and have your voices heard.”

In its annual report released in April of 2022, the United States Commission on International Religious Freedom (USCIRF), listed India among its Countries of Particular Concern (CPC) for the systematic, ongoing, egregious violations of religious freedom for the third consecutive year.

The deteriorating conditions for minorities, especially Muslims have drawn the attention of elected officials, including State Representative of Minnesota, Ilhan Omar.

On June 21, Omar introduced House Resolution 1196 which condemns India for egregious violations of human rights and religious freedom. The resolution which was co-sponsored by Congressman Jim McGovern (MA), Congresswoman Rashida Tlaib (MI), and Congressman Juan Vargas (CA), also urges the State Department to act on the recommendations of USCIRF and designate India as a CPC under the International Religious Freedom Act.

The Director of Operations of Council of American Islamic Relations (CAIR) – Houston, William White, said, “The authoritarian Islamophobia demonstrated by the government in these states and across India is the same across the globe: collective punishment of innocent civilians as a means of retribution on those that partake in public protest.” He also urged everyone to call their congressperson to pass House Resolution 1196.

The Houston crowd chanted slogans of unity with Muslims in India, including, “We Stand with Afreen Fatima,” and “Stop Indian Muslim Genocide.”

“We stand for justice. We stand for human rights. The egregious acts perpetrated against Indian Muslims and minorities need to stop. People of all walks of life should be condemning and working to highlight the plight of Indian Muslims,” he said.

Protests for this cause have already taken place in California and Dallas, with cities like Seattle and Indianapolis following suit with upcoming protests.