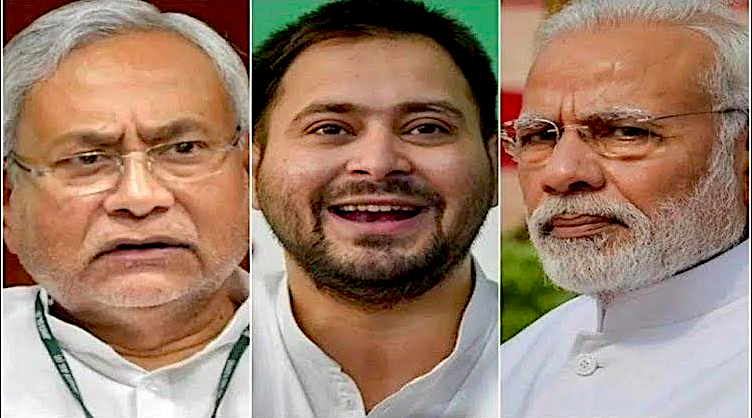 India’s most shameless politician Nitish Kumar somersaulted on Tuesday to exit the Bharatiya Janata Party (BJP) led National Democratic Alliance (NDA) headed by headstrong anti-Muslim rabble-rouser Narendra Modi. After a meeting of the United Janata Dal JD (U), Nitish Kumar headed straight to former chief minister Rabri Devi and surrendered at Devi’s altar invoking life-time friendship with the Rashtriya Janata Dal (RJD) patriarch Lalu Prasad. Lalu – Rabri’s son Tejashwi Yadav was also present to witness the drama. Rabri Devi was perhaps waiting for this moment. Rabri reportedly taunted Nitish: Kaahe ko Aaye Ho Nitish Babu? (Why have you come Nitish Sir?) Nitish Kumar was in tears with Rabri’s piercing barb. Tejashwi intervened: Chacha (Nitish) se Aise Baat Nahi Karte! (You should not talk to Nitish Uncle like this). Nitish Kumar apologized profusely to Rabri Devi for backstabbing the Mahagathbandhan to go with the BJP and the NDA earlier. He was about to fall at Rabri Devi’s feet when Tejashwi held Nitish’s hand and escorted him to a seat. Rabri Devi gave Nitish Kumar an earful before agreeing to give Nitish Kumar one more chance to make amends. After a discussion with the sick Lalu Prasad, Rabri and Tejashwi assured Nitish Kumar of RJD’s support.

When the Devi (Rabri) relented, Nitish Kumar’s change in the refuge was visible. The somersault from Narendra Modi Sharanam Gachhami to Lalu Sharanam Gachhami was complete! Nitish Kumar also phoned the Gandhis – Sonia and Rahul, to seek the support of the Congress, which itself is in the Intensive Care Unit (ICU) on a ventilator. The Hindustani Awami Morcha (HAM) of former chief minister Jitan Ram Manjhi thought it wise to continue supporting Nitish in the hope of Jitan Ram’s son continuing as a minister in the new Mahagthbandan dispensation. The communists also came along. Nitish Kumar andTejashwi marshaled their troops — all legislators of the RJD, JD (U), and other parties to run to the Governor to seek the lollipop of power one more time. The RJD and the Congress are ready to extract their pound of flesh by bargaining for the choicest ministries and the much coveted Speaker’s post. A new Nitish-led government minus the BJP is a foregone conclusion. The question: how long Nitish Kumar will have patience with Tejashwi Yadav again? Why have the corruption charges leveled by the JD (U) evaporated suddenly?

The political bandit Nitish Kumar has taken away the votes of the secular people in general and the Muslims in particular but cheated them by running away into the arms or feet of Narendra Modi. Tired of the BJP’s political sodomy, Nitish Kumar’s JD (U) came back to the Mahagathbandhan for a healing touch. As far as the caste census is concerned, both Nitish and Tejashwi are on the same page. This is set to alter the caste equations once again. The BJP’s reluctance to go for the caste census will be its undoing in Bihar. The opposition which was in tatters after the Maharashtra episode may be breathing easy now.

The picture for 2024 is not clear yet! Now, there will be a three-way fight to lead the opposition. Mamata Banerjee and Nitish Kumar will have to contend with the ambitious Congress with an inflated ego.