The Telangana Rashtra Samithi (TRS) and the Bharatiya Janata Party (BJP) are doing what they are capable of doing their best — conspiring and colluding to destroy mosques and Muslim graveyards in Golden Telangana. These are the words of the agitated members of the community, who reacted to the demolition of Masjid Khaja Mahmood at Shamsabad near Hyderabad’s International Airport and the demolition of graves at the Afzalgunj Qabrastan on the border of the old and the new city of Hyderabad. The difference is the Khaja Mahmood Mosque was demolished at 3 am by the municipal employees in the heavy presence and support of the local police whereas the destruction of the graves at the Afzalgunj Qabrastan is the handiwork of the landgrabbers who are allegedly affiliated to the TRS.

There are 40 houses of Muslims and seven houses of non-Muslims in the Green Avenue Colony of Shamsabad. The Khaja Mahmood mosque was built two years ago on a 250 square yards of plot earmarked for a mosque by the developers. The 5 times prayers are held regularly. One Vishal Singh, who was eyeing the Masjid plot and whose own house is allegedly illegally constructed, complained to the municipal authorities about the mosque. Vishal Singh is an alleged supporter of a central minister whose farm house is near the demolished masjid. This also explains a large number of saffron hot heads presence at the time of the demolition of the masjid. Majlis legislator Kausar Mohiuddin along with the aggrieved residents protested day-long against the demolition. They were later whisked away by the police. The municipal commissioner Saber Ali, who is reportedly not a mainstream Muslim was allegedly bribed and also threatened to pull down the mosque late at night.

The All India Muslim Personal Law Board has strongly condemned the demolition of the Khaja Mahmood mosque. The general secretary of the board Maulana Saifullah Rahmani has called the demolition as ‘the worst crime of the TRS government’, which pretends to be quite friendly with the minorities. The All India Majlis Taameer -e- Millat has also lambasted the demolition of the mosque. Apart from these two Muslim bodies, many other organizations and individuals have demanded immediate re-construction of the demolished mosque and strong action against the municipal commissioner, employees, and policemen. They demanded the immediate dismissal of the culprits from the government service.

Afzalgunj, named after the Nizam V Afzal ud-Dawlah Bahadur, is a prime place which divides the old and the new city. There is a Qabrastan near Dargah Hazrat Syed Jaanullah Shah Quadri, which is many centuries old. Some time ago, burials were allegedly stopped citing a lack of space by the caretaker (Mutawalli). That was actually an excuse to clear and destroy the graves in the qabrastan in collusion with the greedy landgrabbers, who are reportedly members of the ruling TRS. There were loud protests. The Waqf Board chairman Masihullah spoke to the protestors to pacify them that strong action will be taken against the culprits and criminal cases would be lodged against them. Though Afzalgunj police station is a stone’s throw from the Qabrastan, Masiullah neither went himself nor sent the waqf inspector to lodge a police complaint. The landgrabbers are allegedly planning to construct a huge multiplex on the qabrastan land. 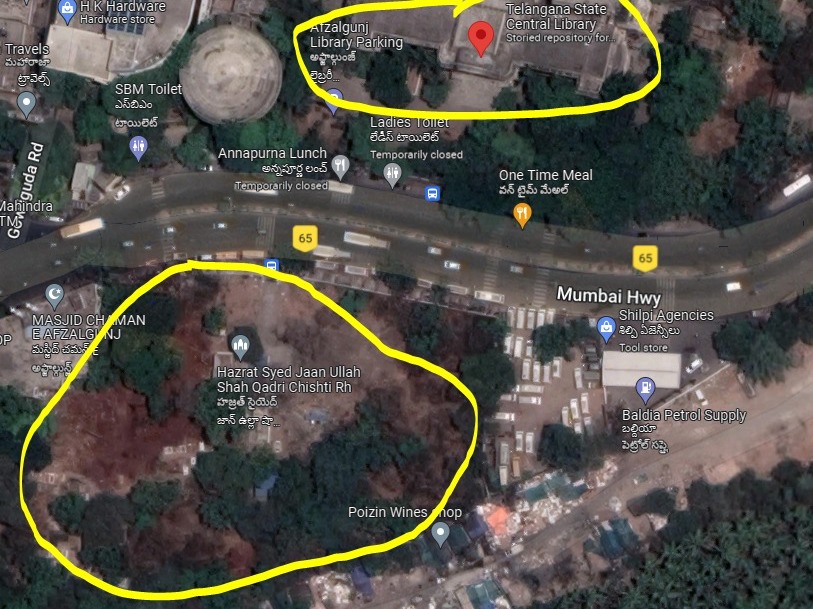 Only yesterday the Hon’ble Telangana High court lauded the Waqf Board for ‘recovering the lost Waqf lands.’ The Hon’ble Chief Justice Ujjal Bhuyan would do well to take a suo moto notice and ask the government and the board to answer about the destruction of graves at the Afzalgunj Qabrastan. The Google map clearly shows the presence of graves. The court can rely on technical and forensic evidence. A portion of the land can be dug up to ascertain the evidence of the remains of the dead persons. The court should also ask the government and the Waqf Board to explain about the demolition of the mosque at Shamsabad. Hyderabad is the third largest surveillance city in the world if one goes by the number of cameras in public places. Are there no cameras on the main road where the Afzalgunj Qabrastan is located? Is the police not patrolling at night? Is the Waqf inspector not checking on the qabrastan regularly? Are those who are digging up and clearing the graves not going to die? Do they not require a burial place for themselves? Majlis is very silent about the clearing of graves from the Afzalgunj Qabrastan.

K. Tarak Rama Rao (KTR), who is recuperating from a leg fracture, has presided over the destruction of six mosques as the Minister of Municipal Administration, including the destruction of the two historical mosques in the State Secretariat in Telangana. Thus, KTR has fractured the hearts of Muslims six times since the formation of a TRS government after the formation of Telangana. With the BJP breathing down the neck, the TRS seems to have chosen the tried and tested path of Hindutva in the run-up to the soon-to-be held next elections to the Telangana Legislative Assembly.