The British democracy was allegedly breached by the Hindu Corporates from Britain and India by making all the Conservative Party Members of Parliament agree to Rishi Sunak’s name as the Prime Minister of the United Kingdom without a mandate! The game to buy the souls of elected representatives and make them switch to a particular party after winning elections on different party tickets has been going on in India after the failure of the Election Commission to effectively enforce the Anti-Defection Law. In the UK’s case at least, it was not about defecting to another party. It was about hijacking the Conservative Party and the British mandate. The tax evasion scandal-tainted Rishi Sunak is an Islamophobe and a Hindu bigot, who has expressed himself clearly about his views on Islam. He blames Britain’s problems on Islam! Boris Johnson who had thrown his hat in the ring to be the prime minister yet again was reportedly persuaded by his ‘friend’ and the Bharatiya Janata Party (BJP) leader Narendra Modi to withdraw. He allegedly obliged his ‘friend’ without a murmur but not without a ‘deal!’ This can be confirmed or denied by Boris Johnson himself. But journalists in the UK should grill Johnson at a press conference about the ‘persuasion’ and what the ‘deal’ was! 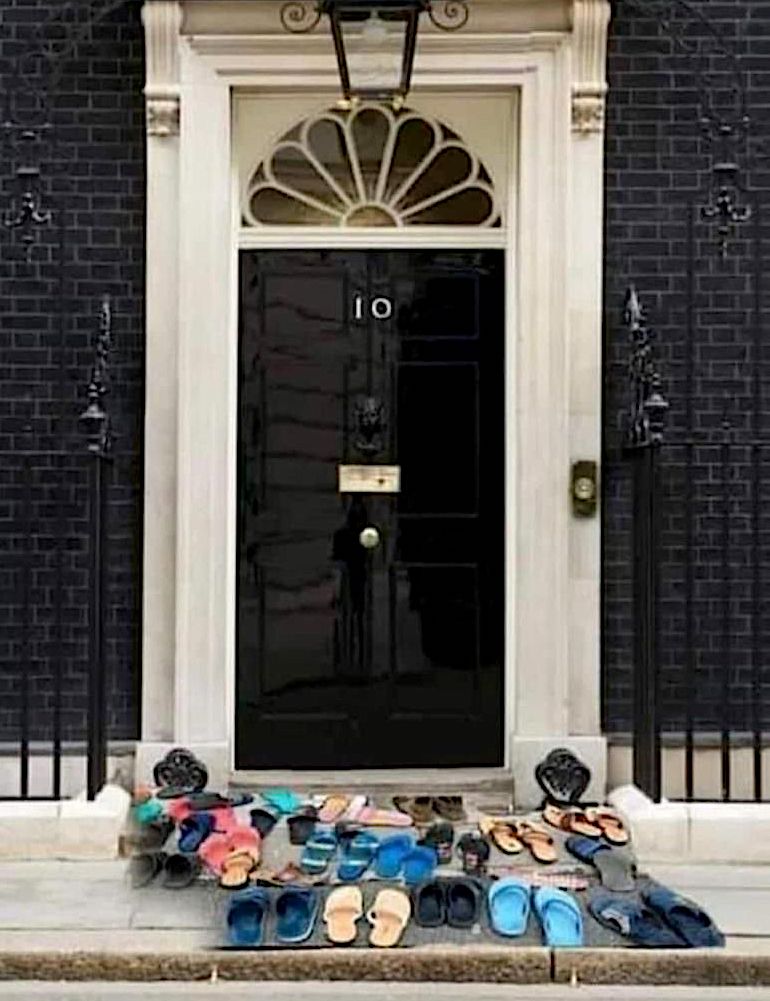 Playing to the gallery to curry favor with the native Britishers, Rishi Sunak during his campaign for prime ministership on 3rd August this year vowed that he will crack down on ‘Islamist terrorism’ which has become a “significant terror threat” for the UK. He added that he will also scrutinize publicly funded charities which could be promoting extremist ideology. Rishi Sunak’s roadmap to fight ‘Islamist extremism’ includes separating extremists from the UK’s regular prison population and torture them in Guantanamo Bay-like torture detention centers. He should have concentrated on efforts to shore up the British economy and the British Pound. He deployed diversionary tactics like his Indian Vishwa Guru whose favorite topic is to widen the Hindu – Muslim gulf and asking the people to ‘identify the trouble makers by their clothes! – a subtle reference to Muslims’  The British patriot that Rishi is himself pretending to be ‘forgot’ to give up the United States residency! But there are no Ayodhya and Varanasi in the United Kingdom to call for ‘surveys’ to find the hidden remains of temples and harvest votes!

Rishi Sunak is ably supported and fed Islamophobia not just by the BJP but by the once-respected Indian diplomats. It may be recalled that the Indian High Commission in the United Kingdom had called for the ‘protection of Hindus’ during the Leicester communal trouble. According to some political observers, who lashed out at this bias, lamented that the Indian High Commission functions like an office of the Rashtriya Swayam Sevak Sangh (RSS), the Hindu militant organization with its members allegedly involved in riots and violence against Muslims. Even the British Muslims of Indian origin had protested about the biased views and targeting the Muslims by the Indian High Commission by not calling for the safety of people of Indian origin in general. Fanning anti-Muslim passions and blaming Muslims for terrorism around the world is done even by diplomats who represented India at the United Nations (UN).  Recently, former Indian Ambassador to the UN, Manjeev Puri told a media house: “The UK has been a victim of terror with blasts taking place in London itself. But I feel Sunak could be referring to Islamic extremism not just in the UK but to the ideology that has seeped into the rest of the world also”. This is not only supporting Rishi Sunak but also feeding Islamophobia to Sunak by Puri. So ill-informed is Manjeev Puri that he does not know that Muslims have been killed in millions due to terrorism including state-sponsored terrorism and wars mainly by the two heartless demons of hate George Bush and Tony Blair and their successors. No weapons of ‘mass destruction’ were found in Iraq, the assumption on which Iraq was attacked! Who killed the peaceful and praying Muslims in the terrorist attack on a New Zealand mosque? Those who kill innocent school children in mass shootings at schools and colleges in the United States are not Muslims. The Prime Minister without mandate and messenger of Islamophobia Rishi Sunak must remember all these before blaming Muslims for terrorism.

After a temple visit on Janmashtami, Rishi Sunak performed ‘Gau Pooja’ or cow worship in London publicly.  Holding a brass tumbler in hand, he was seen offering water to the cow. Sunak, along with his fiercely rigid wife Akshara Murthy were then seen performing a ritual with a Diya, seeking blessing from the cow. Nobody has any objection if Rishi seeks blessings from a cow or a dog. He should perform the rituals at his home and away from public glare. No cow can solve Britain’s problems of rising inflation and a failing economy! I hope the Britishers agree with my assessment. Human efforts are needed to overcome these problems. Rishi Sunak’s wise father-in-law and Infosys founder Narayana Murthy once said: “I am very religious. But I keep my religion at home and I don’t participate in any religious activity outside the home.”  He even refuses to break a coconut in public, however, dire the warnings of bad luck may be. Rishi Sunak should not display his cow worship or his idol worship in public but follow in public life, the example set up by his cherished father-in-law. 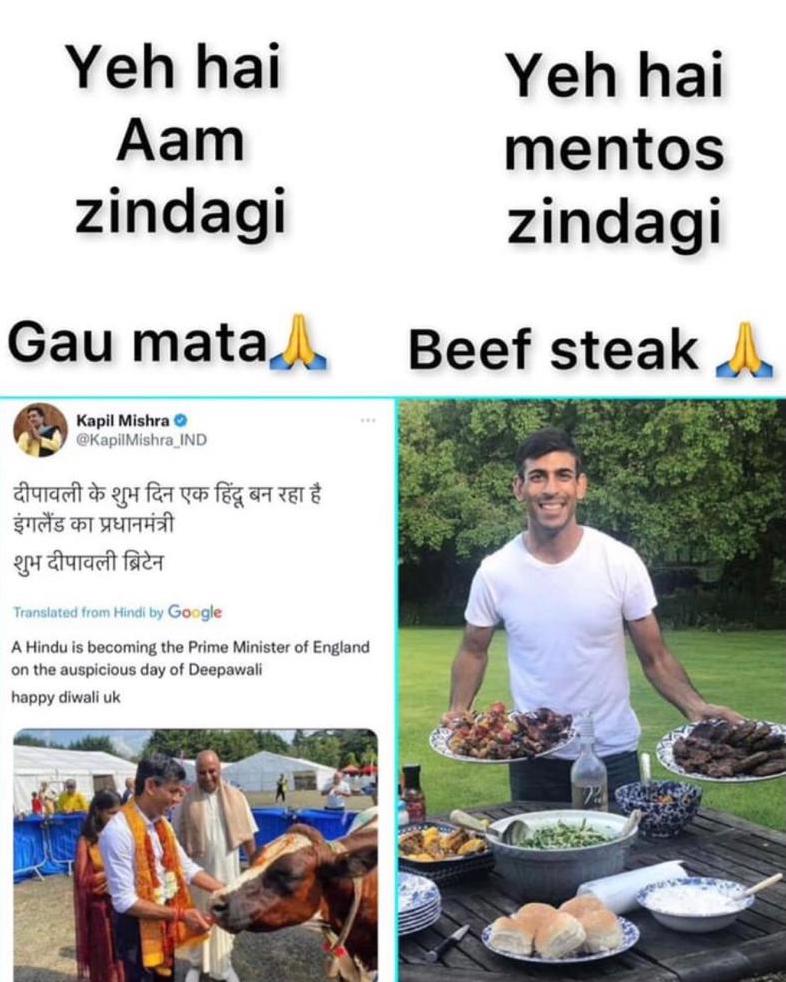 What Rishi Sunak must do is make real efforts and return the Kohinoor, jewels, rubies, emeralds, pearls, and diamonds plucked from the Taj Mahal and carted to the UK, Tipu Sultan’s valuable possessions stolen from his palace, Maharaja Ranjit Singh’s throne, the Indian artifacts, antique idols, and heritage looted from the Hindu temples by the British during their 200-year old wretched occupation of India. Do not forget to return the economic fugitives Nirav Modi, Lalit Modi, and Vijay Mallya.

Despite all the tall claims of Rishi Sunak about his banking expertise, it is highly unlikely that he will be able to provide economic relief to the common man. Public memory is not so short to forget about the £27 billion scandal of bank loans during Rishi Sunak’s tenure as Chancellor of Exchequer at the time of Covid-19. He will not be able to bring back the British economy on rails and the path of progress when the likes of Boris Johnson and Liz Truss have failed. It is quite shameful for the misogynist and patriarchal Conservative Party for making Liz Truss’s life difficult and not allowing her enough time to put the United Kingdom on the path of progress.  Extremism has to be fought tooth and nail but it should be on either side of the divide. On the other hand, Rishi Sunak should avoid having nightmares on account of Islamophobia! Sooner the elections are held, the better.