Why are Hindutva Extremists Not Arrested for Trespass, Illegal Installation of Idol, Pooja in Qutub Shahi Masjid Premises in Raidurgam, Telangana?

The Raidurgam village on the outskirts of Hyderabad has been witnessing unprecedented communal tension since Sunday after about 100 – 150 Hindutva extremists trespassed into the Qutub Shahi Masjid premises, illegally installed an idol, and performed pooja.  Anticipating violence, the roads leading to the conflict zone have been heavily fortified by the police, and entry is strictly prevented to outsiders. The Telangana Police instead of removing the idol and restoring peace immediately added fuel to the fire by ordering ‘status quo.’ This was the same ‘status quo’ which led to the Babri Masjid dispute and its ultimate demolition by Hindutva extremists. It may be recalled that idols were placed in the pulpit of the Babri Masjid in the dead of the night by a Hindu priest.

The Qutub Shahi Masjid, which is located in Survey number 82 in Manikonda Jagir village, is classified as ‘Poramboke Sarkari’, as per the copy of official documents available with BeyondHeadlines. It is situated behind the Malkam Cheruvu lake. On Sunday, the yet-to-be-arrested Hindutva extremists – men and women – broke open the gate of a compound in which the Qutub Shahi Masjid is located. The extremists mercilessly sacrificed a goat and performed pooja in the vicinity of the Masjid. The provocation was caused by the people who are demanding the construction of the Katta Maisamma temple in the area allotted to them on the Poromboke land, according to policemen who requested anonymity. 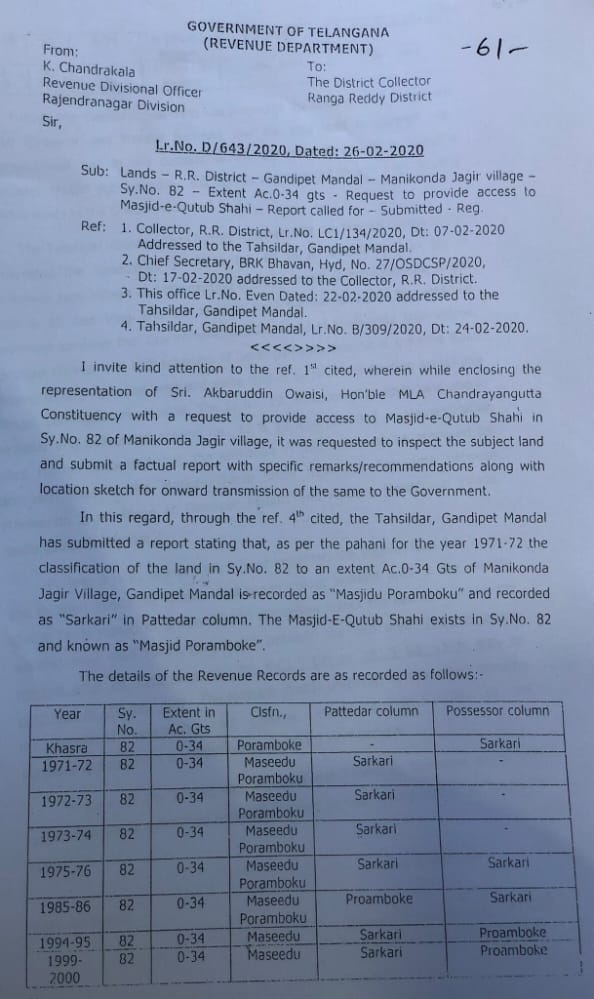 Wherever there is land attached to a Masjid or Dargah, the Hindutva extremists think that they are duty-bound to encroach on the land and build illegal temples. The local BJP corporator Sai Baba and others, allegedly created trouble on 16th March 2022, demanding land for a temple. Due to this, the Ranga Reddy District Collector Amoy Kumar directed the Tahsildar to allot 18 guntas of land in Survey no. 82 which also houses the Masjid, for the construction of a new temple. But the land has not been demarcated yet.

After the criminal trespass incident, the police on Monday denied entry to everyone except for those who either wanted to go to the temple or the Qutub Shahi Masjid. The five times prayers are regularly held at the Masjid. Contradictory to the police’s claims, the men gathered at the temple on Monday claimed innocence. “We do not know who went inside the Masjid premises and offered pooja. We have nothing to do with it,” says Prabhakar, who is pressing for the construction of a temple and vitiating the peaceful atmosphere.

The locals see the criminal trespass into the Qutub shahi Masjid and performing pooja as a tactic to prompt the authorities to expedite the process of handing over the land for a temple. “The boundary covering the backside area of the Masjid has been damaged by a group of persons and Pooja rituals were performed, we demand the Wakf Board and the revenue department to take necessary steps to protect the land,” said Amanullah Khan, President of the Masjid -E-Qutub Shahi.  The Waqf board as usual is caught napping and it is ‘verifying the land details to demarcate the area belonging to the Masjid. The Waqf Board chairman Masihullah Khan, a KCR appointee and a stooge pretended to attend a meeting with the Revenue officials to solve the issue. The Majlis Ittehad ul Muslimeen chief Barrister Asaduddin Owaisi, MP, and Kausar Mohiuddin MLA, have spoken to the authorities and demanded appropriate action against the trespassers and to remove the matter containing rituals from the Masjid land.

Meanwhile, the Raidurgam police claim to have filed a case of trespassing against those who entered the Masjid’s Poramboke land illegally. The Raidurgam police inspector N Tirupathi says that they are in the process of identifying the people behind the unlawful activity. There is no copy of the First Information Report (FIR) available yet. No arrests have been yet! The Telangana Rashtra Samithi (TRS) government seems to be worse than the BJP government in Karnataka. At least in the case of trespass and performing of pooja illegally in Madrasa Mahmood Gawan, the Karnataka police arrested four Hindutva extremists. During the time of protests against the habitual communal offender and the Prophet abuser Raja Singh, BJP MLA, the Telangana Police broke open the doors and arrested hundreds of Muslim youth late at night in Shah Ali Banda, Qazi Pura, and other localities of Hyderabad. Most of the arrested innocent youth had to be let off for lack of evidence. What makes the Telangana Police so biased – to arrest only Muslims and let go off the extremist majoritarians?

Analyzing the situation, M A Majid, senior journalist, and political analyst, who is also a former member of the Press Council of India (PCI) urged the police to play a non-partisan role and apply the law equally to criminals and extremists irrespective of their religious and political affiliation. He urged the community to exercise patience and asked the authorities to solve the issue immediately.

There is a video going viral on Twitter showing the trespass by the Hindutva extremists. The boundary wall is broken. The pooja material and the animal sacrifice evidence is available. What more is needed for the police to act, arrest the extremists and clear the Masjid land premises of the illegal overnight construction and the unwanted rituals material? The police must respect the law of the land and the Constitution of India. There should be no trespass and encroachment of lands belonging to places of worship, whether it is a mosque or a temple, or a church!