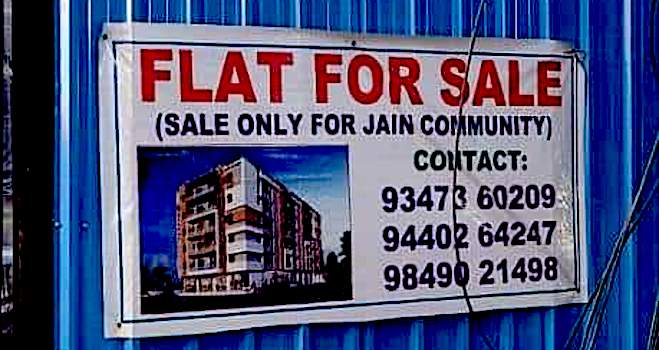 Hyderabad is going the Gujarat way as demographic changes purge Muslims from prime areas in the new city according to a planned conspiracy by the extremists and the land mafia. In Gujarat, flats are not sold or given on rent to Muslims in Hindu-dominated localities and apartments. The economic genocide of Muslims is underway in Hyderabad too. The Muslims are either lured or scared that they will be heavily outnumbered in localities with fast-changing demographics. Wherever land is available in large chunks, the Muslims are lured away to sell their lands or large houses to construct multi-storied apartments. The builders then sell the apartments to non-Muslims only. The Muslims are discouraged by the builders with stringent conditions that sheep cannot be slaughtered on Bakrid in the apartment premises. Some other builders say that the apartments are for vegetarians only. Some blunt builders say it openly that flats will not be sold to Muslims. They should not buy flats for their own safety or others are objecting to any sale to Muslims. Flats are not sold or given on rent to Muslims even in upscale localities like Banjara Hills, Jubilee Hills, Hi-Tec City, Gachhi Bowli, etc. Muslim Information Technologists (ITs) have a hell of a time getting a flat on rent.

The latest case is about the Eden Gardens – a high-end wedding venue on acres of land located on the King Kothi – Ramkote border. This is towards the Purdah Gate of the King Kothi Palace, where the last Nizam of Hyderabad His Exalted Highness (HEH) Mir Osman Ali Siddiqui Khan Bahadur ruled from and breathed his last there. Last year, the King Kothi was also sold to non-Muslim builders and it is under litigation between two companies with an ownership dispute. How did the Government allow the sale of the King Kothi Palace – a heritage structure? It should have been preserved for future generations. There is government apathy. There is no judicial activism on this!

The Eden Gardens belonged to affluent Nawabs before it was sold to one Sawan Jain. Once he got possession of the huge prime land, he planned a high–rise venture. He has allegedly put up a signboard, which clearly mentions – ‘Flat Sale for Jains Only!’ This means Muslims should not even think of owning flats in the new apartments. Why did Sawan Jain buy the Eden Gardens from Muslims if he did not wish to sell any flats to Muslims? Why is the K. Chandrasekhar Rao (KCR) Government in Telangana State watching the situation helplessly? Why is the Greater Hyderabad Municipal Corporation (GHMC) under KCR’s son and Telangana’s Municipal Administration Minister K T Rama Rao (KTR) not taking any action against blatant discrimination and attempts to incite hatred against Muslims? Sawan Jain’s Eden Gardens’ purchase deal should either be canceled or a written undertaking must be taken from him by the GHMC that at least 30 percent of the flats will be available for sale to Muslims, Christians, and Sikhs.

Previously, large houses were bought from Muslims inside the Sher Gate near King Kothi with large apartments presenting a changed demographic structure. Putting together the encircling of the Sher Gate and the Pardah Gate localities puts one community in extreme danger at the time of any unfortunate riot. There will be no escape route to save precious human lives. Eden Gardens sale is not a one-off case. Many localities with a high concentration of Muslims like Agha Pura, Chela Pura, and Gosha Mahal have changed demographics. Gosha Mahal is the Legislative Assembly Constituency represented by the Prophet Abuser Raja Singh, who has more than 100 cases against him for disturbing communal harmony and peace. The MLA suspended from BJP makes allegedly hateful and incendiary speeches and gets away scott-free without any legal punishment or conviction to take away his membership of the Legislative Assembly. The market land rate in Gosha Mahal, Agha Pura, and Chela Pura is more than Rs. 2. 5 Lakh per square yard. The TRS government must investigate the distress sale and cancel all such property transactions. The Central Bureau of Investigation (CBI) and the Enforcement Directorate (ED) must probe the sale of property in these areas and investigate possible money laundering cases. There is a huge difference between the government registration rate and the actual market rate. Where did some buyers get so much unaccounted money to buy prime properties in such areas? Where did the sellers spend crores of rupees accrued from their property sales? Is the unaccounted money generated spent on buying the souls of the scoundrels for political power?

India is our precious common destiny! Let it be that way forever!!