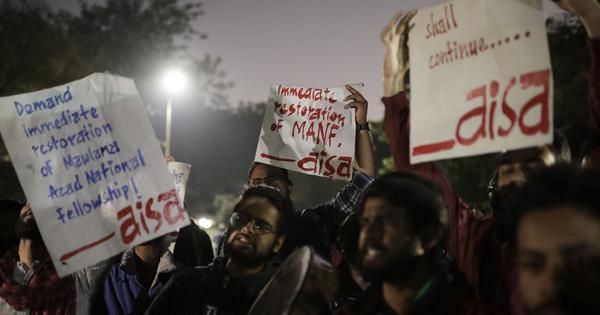 The Lok Sabha erupted on Tuesday with Imtiyaz Jaleel (AIMIM), S T Hasan (SP) Danish Ali (BSP), and Badruddin Ajmal (AIUDF) demanding vociferously the restoration of the Maulana Azad National Fellowship (MANF) and the Pre-Matric scholarship immediately to facilitate the continuation of education of the economically deprived minority students. Many Christain, Jain, and Sikh MPs were deafeningly silent on the issue concerning their communities too! MANF is a fellowship for economically weaker students from minority communities. It covers all institutions recognised by the University Grants Commission (UGC). The students from six notified minority communities – Muslim, Buddhist, Christian, Jain, Parsi, and Sikh – received financial help from the scheme for higher education in MPhil and Ph.D. programs till the Modi Government put a sword to this scheme with an announcement in the Lok Sabha on 8th December.

The BSP MP Danish Ali raised the demand during a discussion on the supplementary demands asked the government to release grants for Maulana Azad Fellowship. He also sought the pre-matric scholarship to be restored along with MANF. “For the prosperity of the country, everyone needs to be taken along. How can you leave minorities behind and prosper?” he questioned. Danish Ali also spoke on the impact of the Goods and Services Tax (GST) on small traders. “‘Gabbar Singh Terror’ is scaring small traders. GST raids are targeting poor traders, not rich industrialists. The Prime Minister wanted people to sell ‘ pakora‘ but even pakora sellers are struggling because of GST raids,” he lamented.

The AIMIM MP Syed Imitiaz Jaleel also joined the demand. “How will minority students study, how will they progress if this fellowship is stopped?” he thundered. Jaleel, who represents Aurangabad in Lok Sabha, also claimed that 940 farmers killed themselves in Marathwada in 11 months.

It may be recalled that the United Progressive Alliance government, led by Manmohan Singh, had launched the MANF in an effort to implement the 2006 recommendations of the Sachar Committee. It’s named after India’s first education minister and freedom fighter, Maulana Abul Kalam Azad.

Sukhadeo Thorat, former chairman of the UGC, believes, “Muslims have the lowest gross enrolment ratio (GER), at 16%, in higher education (institutions) among all the communities in the country as compared to the national average of 26.3%.” “If fellowships are taken away from the minority communities, they won’t be able to go to universities or any other higher education institutions,” he stressed.

Husnara Salim, the grand-niece of Maulana Azad, opines that this government has been persistently trying to diminish Maulana Azad’s personality since it came into power in 2014. She was reportedly told that last year, at a programme of the Indian Council for Cultural Relations (ICCR), a statue of Maulana Azad was removed, and his books, donated by his family, were lying in the dust. The learned scholar Maulana Azad was a founding member of the council.

According to noted Historian Irfan Habib, “This is not an insult to Maulana Azad alone but it also disregards all the freedom fighters together.” “It is awful that the government withdrew the fellowship that was named after Maulana Azad, who was the longest-serving education minister of India and under whose regime several premier educational institutions, including the Indian Institute of Technology (Kharagpur), and academies, including the Sangeet Natak Akademi, came into existence,” he pointed out.

In her Lok Sabha speech, Sangh Parivar smitten Smriti Irani had said that the scheme was being discontinued because it “overlaps with other scholarships”. Tearing down this argument, Professor Suraj Bahadur Thapa of Lucknow University enlightens that “unfortunately, instead of correcting the anomalies, they stopped the scholarship altogether.” He further asked why the government does not register students to apply for a fellowship with their Aadhaar number, to avoid issues of overlapping. The learned Prof Suraj Bahadur has presented a wise solution! Will the Modi Government act on this?

Nandita Narain, former president of the Delhi University Teachers’ Association, said that the government is withdrawing the MANF at a time when the minority communities need it the most. It reflects the “anti-education” and “anti-Muslim” mindset of the ruling dispensation, she bemoaned.

The BJP Government to close down the Madrasas and seek modern education. But, it is not allowing poor Muslims, especially girls to for modern higher education. This reminds me of an incident noted poet Munawwar Rana had narrated once. He was reportedly stopped during the frisking of handbags at the airport and he was asked to throw away the razor blade he was caring for shaving. He countered the security personnel there: ‘This is very strange! You neither allow us to grow beards nor allow us to keep shaving blades. What should we really do?’ The BJP government is also acting similarly. They do not want either Madrasa education or modern education for Muslims!

May I ask the Hon’ble Prime Minister Narendra Modi: “On the one hand, the BJP is expanding its so-called outreach to the Pasmanda or backward Muslims but on the other hand, it stopped the funding of their education.’’ Why the double standards? I can only advise: