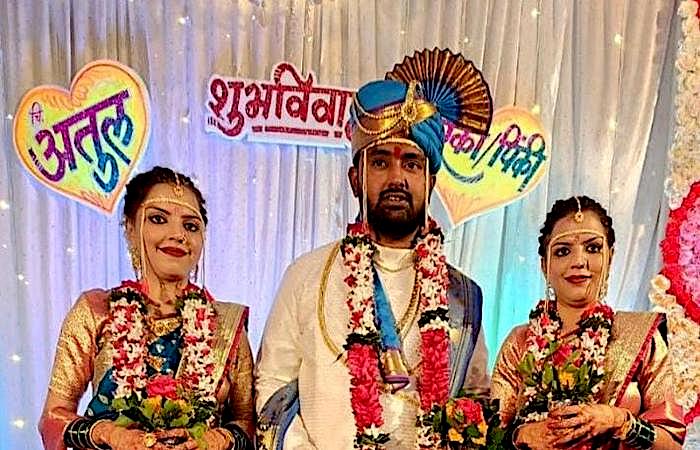 In a bizarre and unlawful arrangement, twin sisters from Mumbai, who are IT professionals, married the same man in a ceremony held in Solapur district, police disclosed on Sunday. The videos of the wedding that took place in Malshiras tehsil on Friday have gone viral on social media. However, it was not a great beginning for the newly-wed twins and their husband. As per the complaint filed by a local resident, Rahul Bharat, a non-cognisable offence under section 494 (marrying again during the lifetime of husband or wife) of the Indian Penal Code has been registered against the bridegroom, Atul Uttam Autade. Perhaps, Atul Uttam thought people will appreciate and say: Ati Uttam! But that was not to be.

The twin sisters reportedly decided to marry the same man as they could not bear parting ways after marriage. Their family consented to the strange demand of the twins, said the police officials. The police complaint states that Autade, a resident of Mhalung in Solapur, solemnised his first marriage with 36-year-old Rinky Padgaonkar and then simultaneously married sister Pinky Padgaonkar during the same wedding ceremony that was held at Galande Hotel. The Padgaonkar family resides in Chandivali West, Mumbai. How did the hotel make themselves a party to this unlawful union? The hotel should be bulldozed.

The complainant Rahul Bharat found the marriage objectionable, according to Solapur rural superintendent of police Shirish Sardeshpande. A complaint was registered in this regard based on the evidence available. “A non-cognisable offence has been lodged. We will take the court’s permission and proceed ahead with further investigation. The law states that a person can marry with only one woman at a time. We have preliminary information that both sisters are close and wanted to stay together. Further investigation is underway,” Sardeshpande added. In the video that went viral on social media, the names of the brides and bridegroom were written prominently, and some people were seen cheering the twins, who tried to garland the bridegroom at the same time. All the guests who were seen cheering at this unlawful act must be booked and asked to clean the houses of Dalits for 10 years and plant one lakh trees in the Thar desert.

“Whether the marriage is legal or not has to be checked as per the Marriage Act. The objection to this kind of marriage has to come from the first wife. We need to first find out whether all the marriage-related rituals took place or not,” prominent lawyer Harshad Nimbalkar opined.

Manu rationalised his wife’s supersession and multiple marriages during her lifespan by citing barrenness, ill health, violent attitude, and misbehavior on her part. Mitakshara as well as Subodhini both justify and defend the supersession of the very first wife. “A lady who consumes any bogus beverages, acts unethically, shows animosity toward her divine, is susceptible of ailment, is destructive, and spends his possessions may at any moment be succeeded by some other wife,” he opined. A childless wife may be supplanted in the eighth year, a woman who bears stillbirths children or whose offspring all die as newborns in the tenth, a woman who bears exclusively girls in the eleventh, and a woman who behaves insensitively in the twelfth.”

Narendra Modi must save Hindu women from polygamy and must not reduce the sacred bond of marriage to: Marry One, Get One Free! The double-engine governments of Shinde – Fadnavis and Narendra Modi must act and lead by example!