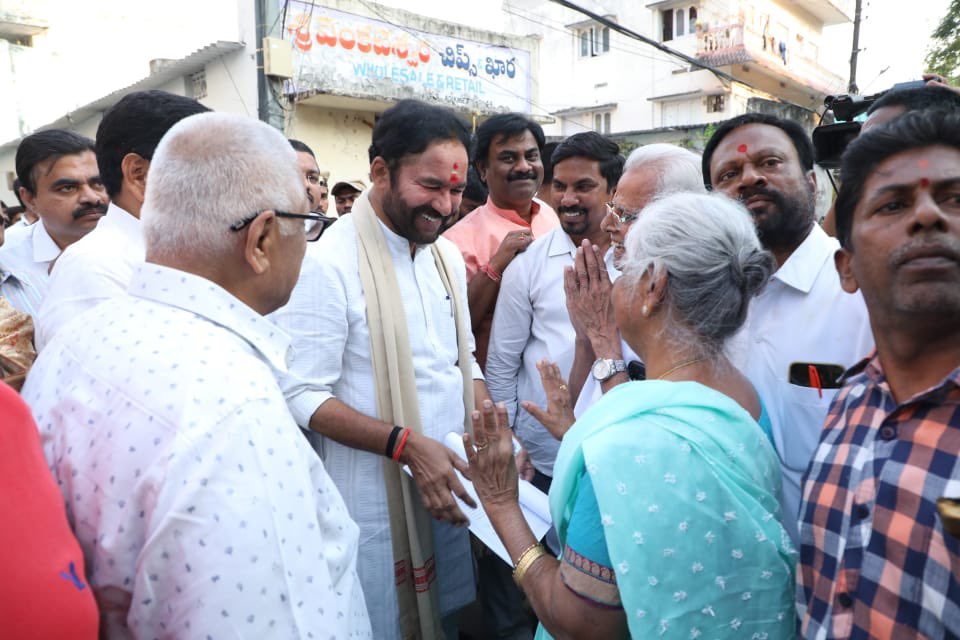 Prime Minister Narendra Modi’s eyes and ears in Telangana is his Man Friday Union Minister for Culture and Tourism G Kishan Reddy. Known for his hard work and loyalty to Modi, Kishan Reddy was handpicked to be the union minister. Kishan Reddy represents the Secunderabad Lok Sabha constituency in Lok Sabha. These days, he is busy on a padayatra touring his constituency from morning to evening to know and address the concerns of his electorate. In the past two days, he has visited the Nampally, Asif Nagar, and Musheerabad Assembly segments in the Secunderabad Lok Sabha constituency.

Kishan Reddy blasted the Bharat Rashtra Samithi (BRS) Government of Chief Minister K Chandrasekhar Rao (KCR) and accused him of ignoring ‘Real Hyderabad’ and promoting only the Hitec city. The Telangana State Government has no idea of what an international city is and it tries to get away by displaying the Hitec City as a showpiece to stake this false claim, he added. He pointed out that the BRS Government was neglecting the areas, which have not elected the BRS and the All India Majlis Ittehadul Muslimeen (AIMIM) legislators. He held meetings with officials belonging to the Greater Hyderabad Municipal Corporation (GHMC), water and electricity departments. He instructed the officials to carry out their duties and work to solve the problems of the people. The residents met him in large numbers and brought to his attention the condition of the roads, and the lack of proper water supply, and electricity. Many old women complained to him about not getting the welfare schemes’ pension on time.

The Union Minister Kishan Reddy has worked from the grassroots to emerge as a popular leader among the masses. He is one of the 4 Lok Sabha members elected on the Bharatiya Janata Party (BJP) ticket from Telangana in 2019. During his current padayatra, he visited Adikmet and Ramnagar divisions in the Musheerabad Assembly constituency and took stock of civic facilities, and interacted with the residents there. He assured timely redressal of their concerns. He spent time with his constituents to listen to their problems in detail. It may be recalled that it is Kishan Reddy’s second padayatra in his Secunderabad constituency in two months. In November, Kishan Reddy visited Borabanda, Addagutta, and Lalapet. He had met ASHA workers and municipal workers and his constituents.

With fire in his belly, Kishan Reddy is keen on taking on Chief Minister K. Chandrasekhar Rao and putting in place grand plans to stop KCR from pursuing his national dreams of presenting himself as an alternative to BJP’s tallest leader Narendra Modi. By meeting his constituents from time to time, Reddy is ensuring that he is politically visible to them. The elections to the Telangana Legislative Assembly are not far away. This will be followed by the Lok Sabha elections in 2024.

The real hunter who may walk away with the prized trophy if the BJP wins the 2023 Telangana State Legislative Assembly elections, it will be none other than Kishan Reddy as the Chief Minister!