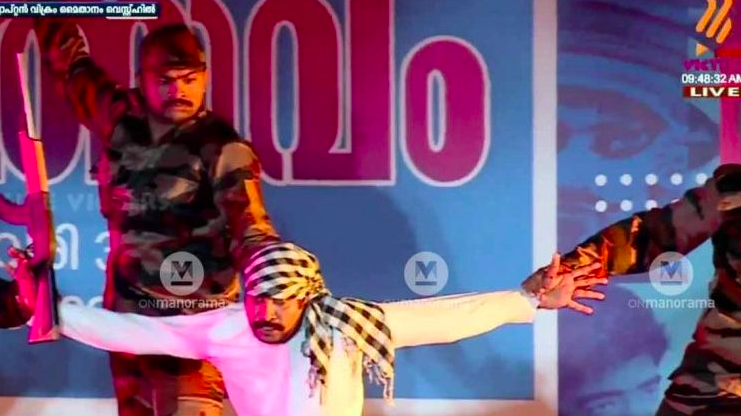 The Bharatiya Janata Party (BJP) and the Communist Party of India (Marxist) seem to be united as both dish out Islamophobia through their governments. The CPM has joined the bandwagon of the hateful majoritarians by allowing an Islamophobic musical programme performed after the inauguration of the State School Youth festival. The musical depicted the Indian army apprehending a man sporting a Keffiyeh, a traditional Arab headgear worn by men. The communalists and the communists are on the same page! Why are the communists backstabbing the Muslims despite allowing them to taste power in Kerala twice consecutively? The pattern is the same from West Bengal to Kerala regarding the nefarious game of the communists and the communalists’ jugalbandi!

Instead of admitting serious lapse and apologizing for the grave State provocation by the Left Front Government, Chief Minister Pinnarayi Vijayan’s son-in-law and minister Mohammed Riyas is soft-pedaling the issue. He is scared even to call out the Sanghi communal elements in the education department. He wants to keep the Rashtriya Swayam Sevak Sangh (RSS) in good humour lest they raise the issue of his Hindu wife yet again. “There are alleged attempts in our country to portray a particular community as extremists and there is a need to look into it,” Mohammed Riyas said in a feeble voice on Sunday. He failed both as a Muslim and as a communist by not standing up to the RSS.

Speaking to the media on Sunday, Riyas observed that the alleged association, if any, of the person in charge of that particular programme with the Sangh Parivar needs to be investigated. “In this particular issue, the alleged Sangh Parivar association of the persons concerned should be investigated,” Riyas opined. He believed such an incident is suspected to be an attempt to create unrest during the youth festival. “It should be investigated whether that was an attempt to divide people and diminish the popularity of the event which witnessed a huge turnout,” he added. Why is an investigation not ordered yet?

The Indian Union Muslim League (IUML) has condemned the depiction of the Muslim community in a bad light in a musical programme. It felt that it should not have happened. The IUML leader PK Kunhalikutty said that the mistake on the part of the Left government cannot be accepted. “They could have used some masks to depict terrorists. But instead, they used a Muslim attire which was an unacceptable mistake on behalf of the government,” Kunhalikutty lamented.

In the Islamophobic musical dance-drama programme, it was shown that the Indian army captured a rifle-yielding terrorist who is seen sporting a Keffiyah, which is a traditional Arabic scarf, allegedly giving the impression that the terrorist is a Muslim. The Malayalam Theatrical Heritage & Arts, in collaboration with Matha Perambra, directed the musical. Locals have demanded that the office bearers of these extremist outfits need to be booked under the UAPA and the conspiracy behind the hateful musical must be thoroughly investigated.

In a social media post, Fathima Thahiliya, a lawyer and former vice president of the Muslim Students’ Federation (MSF) claimed that “CPM MLA from Kozhikode North, Thottathil Ravindran had seen the rehearsal of the program and yet did not find the musical ‘Islamophobic’. Ravindran was also invited to the BJP by its leader K Surendran.” This clearly establishes the BJP – CPM jugalbandi and long-term plans for 2024.

It is not even 24 hours since the West Bengal BJP leader Suvendu Adhikari openly acknowledged the support of the Left for him. He admitted that the Left cadre supported him and the BJP to defeat West Bengal Chief Minister Mamata Banerjee in Nandigram Assembly Constituency because they were “Hindus.” He also claimed that all cadre belonging to the Left is not bad.

The way communalists and communists are partnering to further Islamophobia, the day is not far when the wily Brahmin Sitaram Yechury, CPM Secretary-General may succeed JP Nadda as the next president of the BJP!