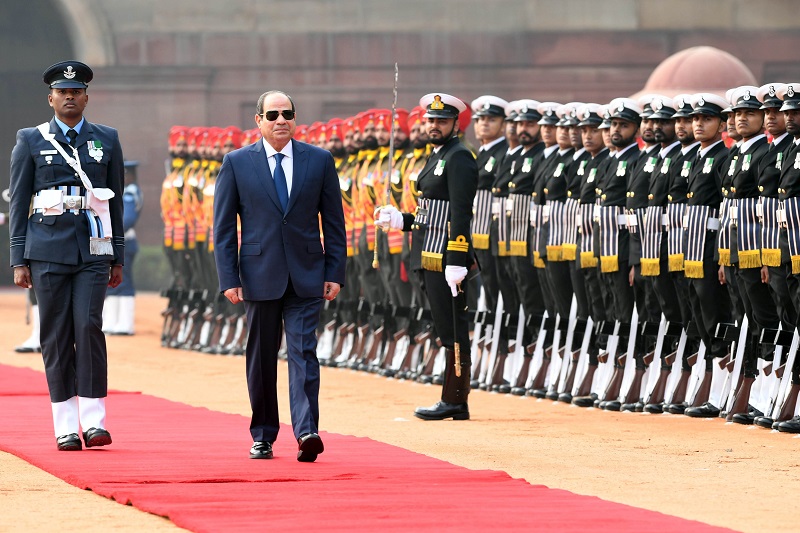 The former American President Donald Trump’s ‘My Favourite Dictator’ Egyptian President Abdel Fattah Al Sisi has arrived in India with a 180-member-strong delegation. Al Sisi will be the Chief Guest at the Republic Day Function in New Delhi. It has not happened often in our glorious democracy that a confirmed dictator who crushes the constitution of his country was invited as the chief guest at the Republic Day function. India became a Republic and formally adopted a Constitution to govern us in a righteous way.

Egypt has seen many Shaheen Bagh type sit-ins. During the August 2013 sit-ins dispersal of protestors, the Egyptian military under Al Sisi’s command was involved in assisting the national police in dispersing the two sit-ins held by former President Morsi’s supporters from sit-ins in Rabaa el-Adaweya and Nahda Squares. This action resulted in rapidly escalating violence that eventually led to the deaths of 638 people, of whom 595 were protestors and 43 were security forces, with at least 3,994 injured from both sides, according to the Ministry of Health, Egypt.  In addition, there were several violent incidents in various cities including Menya and Kerdasa including the Kerdasa massacre. Writing for the British newspaper The Independent  in August 2013, Robert Fisk described the then-General Al-Sisi as being at a loss, but that a massacre – as Fisk called the sit-in dispersal – would go down in history as an “infamy.” In the American magazine Time, Lee Smith concluded that “Egypt’s new leader is unfit to rule”, referring not to the actual head of government at the time, interim president Adly Mansour, but to Al Sisi. In a file published by the State Information Services, the government explained the raids by stating that “(Egyptian) police went on to use force dispersing the sit-in on 14 August 2013 with the least possible damage, causing hundreds of civilians and police to fall as victims.” A similar narrative was used in the Lok Sabha to defend the Delhi Police after the Shaheen Bagh dispersal and the brutal lathi-charge against the girl students of Jamia Millia Islamia — ‘minimum force was used’! If that was the minimum, what would be the maximum? The policemen who forced the dying young men from gunshots to chant the offensive slogans of the right-wingers are still unidentified and unpunished. Similar things happen in Egypt.

Veteran journalist M A Majid on the 25th January 2023 morning programme of analysis of newspapers on 4TV called Egypt, Israel, and India a ‘Triangle’ in terms of atrocities on the common man and the opposition. He exposed the saga of corruption, human rights abuses, and high-handedness under dictators. What Majid has analysed about Egypt, I can confirm by putting together facts that actually happened and Al Sisi cannot deny these. Egypt is also run on the alleged 40 percent commission-type governments. After Al Sisi had ousted president Morsi and disbanded the Shura Council, in September 2013, the interim president Adly Mansour temporarily decreed that ministers could award contracts without a request for tender. The Egyptian Adanis and Ambanis are awarded contracts without any tenders! In October 2013, the Egyptian government awarded building contracts worth approximately one billion dollars to the Egyptian Army! In April 2014, the interim government’s Investment Law banned appeals against government contracts!! I have no information if any of the contractors committed suicide like in Karnataka.

It was also in September 2013, the interim Egyptian government removed pre-trial detention limits for certain crimes similar to our own UAPA. It allowed unconvicted political dissidents to remain in detention indefinitely. At least, the UAPA is a shade better. A UAPA under trial can be in custody or detention for up to 2 years. In 2013, Al-Sisi’s government banned protests to combat the growing unrest. The brave police arrested thousands of Egyptians using the new law.

Abdel Fattah Al Sisi has led in anti-Islam measures like his models of Pharaohs. He has taken measures within Egypt such as regulating mosque sermons and like his dear friend and host, he has also taken up changing school textbooks including the removal of some content on Saladin and Uqba bin Nafi. He has also called for an end to the Islamic verbal divorce, which his dear friend imitated in India. However, a council of scholars from Al Azhar University rejected the verbal divorce issue. The Egyptian Supreme Court did not prefer to target and harass Muslims by refraining from showing deep hatred and animosity toward Sharia.

Al Sisi the sold-out stooge of Mossad, KGB, and the Parivar is an enemy of the Palestinians. He promised that Egypt would guarantee Palestine would not violate the peace treaty if it is reached. He made his occupying intentions clear when he talked about Egypt’s willingness to deploy Egyptian Observer Forces in the Palestinian Authority in the West Bank and Gaza Strip. He assured his master Benjamin Netanyahu that he would occupy Palestine and rule it with an iron hand to protect Israeli interests. He admits to talking to Netanyahu “a lot.” This is important for him to take instructions from Netanyahu and carry out his orders on a day-to-day basis.

The Egyptian people are very friendly and respectful towards Indians. I have many Egyptian friends. My best friend is Dr. Mohammed Shams, an Egyptian from Mansoura, with whom I performed Haj in an Egyptian entourage. He took care of me like a brother when I was sick at Mina.

But Egypt’s relations with Arab and Muslim countries are at an all-time low because of Al Sisi’s support of acts of Islamophobia and atrocities against Muslims. Once Turkish President Erdoğan was said not to recognise Al Sisi as President of Egypt and called him an “illegitimate tyrant.” Al Sisi also went on record defending the atrocities of the Syrian dictator and genocider Bashar Al Asad.  In November 2016, Al Sisi said that he supported the presidency of Bashar Al Asad in Syria for the sake of stability.

Abdel Fattah Al Sisi is a Russian stooge who came to power with Russian President Vladimir Putin’s assistance. After a reported phone call from Vladimir Putin to Al Sisi, Egyptian security checked the US Secretary of State John Kerry and his top aides through a stationary metal detector as well as with a handheld wand before meeting with Al Sisi in what was considered an unusual screening for a senior State Department official. It left John Kerry in a ferocious and abusive mood. Later, Al Sisi also skipped Obama’s invitation to the American-African summit.

Both military and political relations between Egypt and Russia witnessed significant improvements after former president Morsi’s overthrow coinciding with the deterioration in relations between the United States and Egypt, once considered its important ally in the Middle East from the times of Anwar Sadat. Unlike the US, Russia supported Al Sisi’s actions from the start, including his presidential bid. Russia reportedly offered Egypt a huge military weapons’ deal after the US had suspended some military aid and postponed weapons delivery to Egypt. On 11 December 2017, during President Vladimir Putin’s visit to Cairo, the two countries signed agreements in which Russia would build Egypt’s first nuclear reactor and supply nuclear fuel for the same. Vladimir Putin extracted his pound of flesh for support to Al Sisi and it was agreed that a “Russian Industrial Zone” would be built along the Suez Canal, explained by Putin as being “the biggest regional center for producing Russian products onto the markets of the Middle-East and North Africa.” In fact, this started Russia’s colonization of Egypt to take on American interests in the region. It did not change the Egyptians’ lives Still, more than 30 % of the Egyptian people live in poverty.

1. Al Sisi once described himself as “a doctor whose diagnoses are sought after by top philosophers and prominent world leaders” as quoted from Shahin, Emad (12 June 2015). “The four traits Sisi, Hitler and Mussolini have in common“, which was retrieved by the Middle East Eye on 26 November 2022.

I have tried to present an honest appraisal of the Egyptian dictator Abdel Fattah Al Sisi with facts and figures. Al Sisi became the poster boy of the Parivar when the Egyptian President Abdel Fattah Al Sisi passively supported the Prophet Abuser Nupur Sharma by not protesting against insult to the Beloved Prophet of Islam (Peace Be Upon Him). There was no statement of condemnation from the Egyptian Foreign Ministry. They chose to stay quiet. Al Sisi has come with a begging bowl for wheat after finding it difficult to get wheat from Russia due to war. Egypt is also another beggar state like our enemy Pakistan.

India’s foreign policy is at an all-time low under Prime Minister Narendra Modi. Nobody better was found to be the Chief Guest than the Egyptian dictator Abdel Fattah Al Sisi. It is India’s misfortune that our political destiny is in the hands of the Chaiwalas, Autowalas, and Doodhwalas, etc. India no longer produces able statesmen like Jawaharlal Nehru, stateswomen like Indira Gandhi, and distinguished diplomats like A P Venkateshwaran, Shyam Saran, Syed Akbaruddin, and Ausaf Sayeed. This should not dampen our celebrations.

Happy Republic Day to all my beloved countrymen!