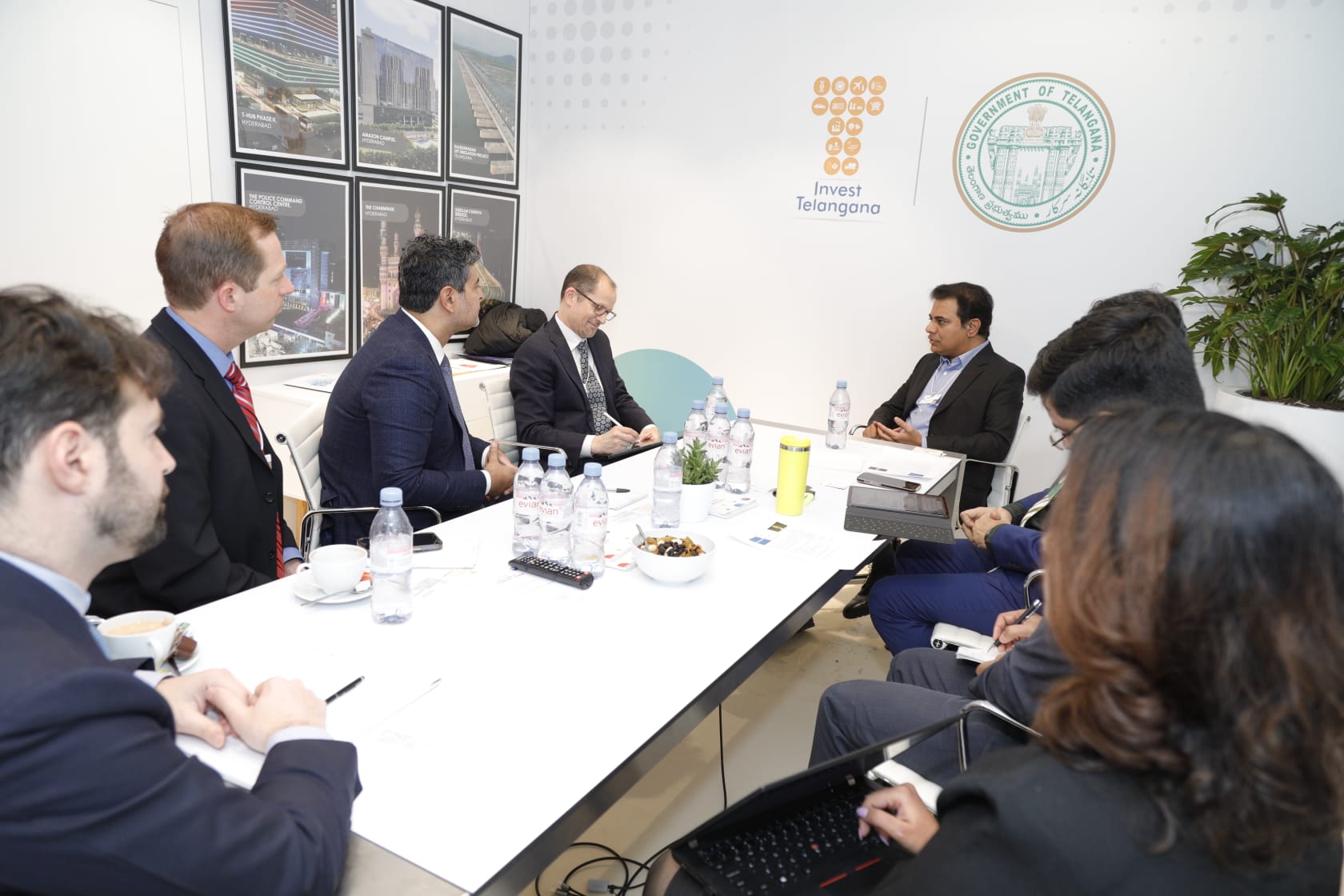 The Telangana State’s First Chief Minister K Chandrasekhar Rao (KCR)’s Cub K T Rama Rao (KTR) has turned into a full grown Tiger and roaring successfully in the picturesque cold mountains of Davos, Switzerland to attract Rs. 21,000 Crore investment for Telangana. The Chief Minister-in-Waiting KTR was the center of attraction among the high and the mighty who had assembled in Davos to deliberate on economic issues and challenges facing the world in the onslaught of staring economic recession this year.

A significant takeaway of this edition of the Davos trip was the World Economic Forum (WEF) coming forward to establish its first India center in Hyderabad. This thematic center will focus on life sciences and health care. Some major investments bagged are as follows: Microsoft announced to set up three more data centers in Hyderabad with an investment of Rs 16,000 crore; Bharti Airtel Group to set up a large Hyperscale Data Centre in Hyderabad with Rs 2,000 Crore. Eurofins, a global leader in the pharma sector, has announced the establishment of a state-of-the-art laboratory campus in Genome Valley with an outlay of Rs 1,000 Crore. Other global companies such as PepsiCo, P&G, Allox, Appollo Tyres Ltd, WebPT, and Inspire Brands have come forward with investments worth Rs 2,000 Crore. Thus, Telangana has attracted investments worth Rs 21,000 Crore across various sectors during the recently concluded annual World Economic Forum (WEF) meeting at Davos in Switzerland.

The Telangana delegation was led by Telangana’s young and able IT and Industries Minister K T Rama Rao. It has successfully concluded its trip to Davos and the minister’s efforts to bring investments to the state have yielded ripe economic fruits. “All the meetings at the WEF were highly productive and we were able to attract Rs 21,000 Crore at the meet,” Rama Rao announced to the media. Presenting the growth story of Telangana and pitching for investments, the energetic minister participated in meetings with leaders of top global organisations, attended round tables, and spoke eloquently at panel discussions. He shared his vision and thoughts on a wide array of subjects in the four-day trip. In addition to this, KTR also interacted with the Indian diaspora in Zurich and highlighted the progress of Telangana to the NRIs in Switzerland. When the global economy is on the brink of recession, Telangana managed to attract some big-ticket investments. The Telangana delegation was successful in showcasing the state as a global investment destination and gateway to India, according to a government press release.

Sharing his experience of the visit, K T Rama Rao observed that the WEF is the right platform to introduce Telangana, which has exceptional industrial policies and infrastructure. He observed that Telangana is strengthening its ties with companies on the WEF platform. He said bringing huge investments to the state and thereby creating employment is the driving force. “I believe that all the new investments and meetings regarding prospective investments will yield favorable outcomes,” he added.

On the occasion, the state minister did not forget to thank the officials from the IT and Industries Department and other departments who were involved in making this trip successful. The delegation comprised of the efficient and enlightened Principal Secretary, IT and Industries Departments Jayesh Ranjan and other able officers — Special Secretary, Investment Promotion and NRI Affairs E Vishnu Vardhan Reddy; Director, Lifesciences Shakti Nagappan; Director, Automotives Gopal Krishnan; Chief Relations Officer, Amarnath Reddy Atmakuri; and Director, Digital Media Dileep Konatham.

With the World Economic Forum’s first India center’s establishment at Hyderabad, the Telangana Chief Minister K Chandrasekhar Rao can breathe easy, pursue his national dreams and pass on the reigns of Telangana to his high-potential, visionary son KTR.