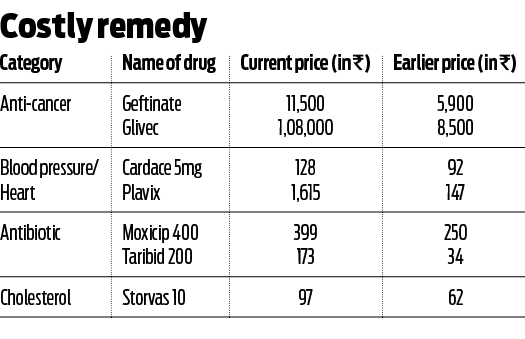 The Union government decision to decontrol prices of 108 drugs — used to treat tuberculosis, AIDS, diabetes and heart ailments — has jacked up their prices. In some cases, prices have seen an unbelievable rise.

In a circular issued before Prime Minister Narendra Modi’s visit to the US, the government asked the National Pharmaceutical Pricing Authority (NPPA), an autonomous body, to withdraw its May 2014 guidelines on drug price control.

NPPA had capped the prices of these 108 drugs, in addition to the already listed 800 essential drugs, to improve their affordability, in the wake of official figures that there are 4.1 crore diabetes, 4.7 crore coronary heart disease, 22 lakh TB, 11 lakh cancer and 25 lakh HIV/AIDS patients in the country.

Are drug companies behind the move?
Drug companies, no doubt, are happy. Their argument is that the 108 drugs mostly relate to lifestyle diseases and are not ‘essential’. One drug company executive said pharma companies themselves have volunteered to keep prices of 800 essential drugs as low as possible. Also, he asks, “In a free market, how can a regulator control prices.”

So now, will the prices of all 108 drugs go up?
No, say officials. “The government has only taken the powers of NPPA and kept them with it. The government will negotiate with pharma companies to keep prices low. The aim is to cut through red tapism,” said a senior official in the ministry of chemicals and fertilisers.

Why did the govt do it, in the first place?
The government decided to empower itself to deal with the pricing of some limited and non-essential drugs. Instead of seeing this as a favour to pharmaceutical companies, it should be seen as an encouragement for them to invest and spend on R&Ds.

But surely some pharma firms might have benefitted?
Definitely. Subsequent to the new move, 0.7 per cent of the combined sales of Sun Pharma and Ranbaxy in India will be out of price control. The corresponding figures for Torrent and Lupin will be 1.5 per cent and 0.7 per cent, respectively. Soon after the government decision, share prices of pharma companies shot up. Sun Pharma and Ranbaxy gained nearly 2 per cent and GSK Pharma and Davis Lab gained 1 per cent each. Glenmark was also up around 1 per cent.

What’s the anti-decontrol group saying?
Former Union minister for chemicals and fertilisers Srikant Jena alleges that the timing of decontrol smacks of a plot to help multinational pharmaceutical companies, mostly headquartered in the US, to earn bumper profits. He said the decision seems to have been taken to let Prime Minister Narendra Modi earn some brownie points while interacting with top US officials and company executives.

Weren’t these drugs under price control regime earlier?
The Ministry of chemicals and fertilisers had, on May 30, 2013, delegated powers to the NPPA to regulate the prices of life-saving drugs. This resulted in a significant reduction in prices of a broad spectrum of drugs. The Modi government extended this regulation to even lifesaving drugs for cancer, HIV, tuberculosis, malaria, diabetes, cardiovascular diseases and asthma. The government later withdrew these guidelines, ahead of Modi’s visit to the US. (Courtesy: dnaindia.com)