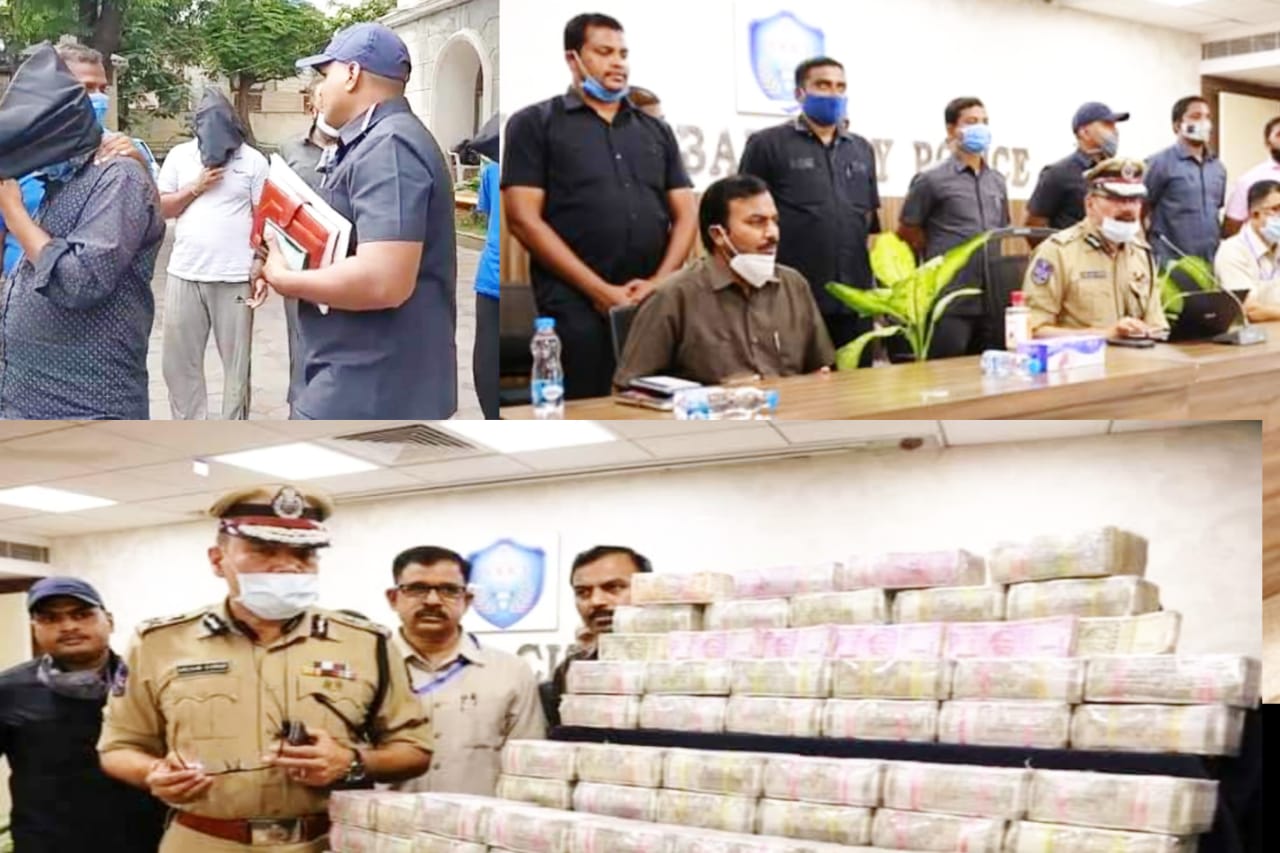 Hyderabad City Police and Success seem to have become synonyms. Led by the charismatic Commissioner Anjani Kumar, IPS, one of the most efficient police forces in the country, Hyderabad Police has repeated its success in nabbing yet another alleged Gujarati hawala gang this year too. Being Covid-19 warriors and busting crime at the same time is not an easy dual job. But for Hyderabad cops, surmounting challenges come naturally to them.

A major hawala racket was busted by the Hyderabad police on Tuesday. Cash worth Rs 3.75 crore and two cars were seized and four persons were arrested in link with the case, by the West zone Task Force police, disclosed  Hyderabad Police Commissioner Anjani Kumar. Acting on a tip-off,  Eshwar Dileep Solanki (29), Harish Ram Bhai Patel (35), Ajith Singh (34), and Rathod Kanak Singh Natuba (42) were arrested by the police. All the alleged accused persons belong to Gujarat. They are presently residing in the posh Banjara Hills in Hyderabad.

The police received reliable information that four persons were moving in two cars with a huge amount of cash. In a filmy-style chase, the police intercepted two cars on Road No 12, Banjara Hills. The four occupants were carrying Rs 3.75 crore cash without any valid documents to support the movement of currency. The interrogation of the accused persons revealed that they were working at P Vijay and Company, which is located in Mumbai. Its owner has been identified as one Kamlesh Shah, a native of Ahmedabad. The company has a branch office at Hyderabad. Two people, identified as Dinesh and Giri, were working as the company in-charge of the Hyderabad branch. The accused Ajith Singh R Dodiya, Rathod Kanak Singh Natubha, and a woman, Thokar Soal Ben, a cook, were working with Dinesh and Giri at the Hyderabad office.

Two of the accused, Eshwar Dileep Solanki and Harish Ram Bhai Patel arrived in Hyderabad on Monday in a four-wheeler, Mahindra Scorpio. The assignment was to collect the cash from Dinesh and Giri working at the branch office in Banjara Hills. They collected the cash on Tuesday and all the four were proceeding in two cars, the Mahindra Scorpio and a Hyundai Accent, to Solapur, when they were intercepted by the cops belonging to Task Force of Hyderabad City Police.

The police suspect that the amount is part of a hawala transaction facilitated by a Mumbai firm. The Police Commissioner informed that the seized amount will be handed over to the Income Tax Department for further action. The persons who are in possession of money will be questioned by the Income Tax department.

It is significant to recall that BeyondHeadlines had reported on 28th August 2019 about the busting of a Gujarati hawala gang by Hyderabad City Police — ‘Hyderabad Police Busts Major Hawala Racket; Gujarati Gang Arrested; Rs 5 Crore Recovered.’ Police success is repeated this year too. But there are major concerns that need to be addressed with repeated hawala hauls.

In both cases, money was being moved to Maharashtra. What is the connection? Do the hawala racketeers have a mighty political connection?  Was the money en route to foreign destinations through Mumbai International Airport? How are the hawala criminals in possession of crores of rupees in hard cash? What is happening to the digital push? A common man cannot transact any business in cash in excess of Rupees Two Lakh. How is it that a select few have access to loads of currency in Rs 2,000 denomination even though the printing of Rs. 2,000 note was stopped in 2019?

Meanwhile, my fellow journalists looking after crime reporting beat dutifully attend press conferences by the authorities, without asking many or any probing questions and filing goody-goody parrot stories. Perhaps, they do not want to join the list of Prashant Bhushan, Prof. Yogendra Yadav, Safoora Zargar, Umar Khalid, and Prof. Apoorvanand. Being fired by their corporate bosses, scare these journalists too. They play safe to toe the official line and avoid joining the queue of 20 crores unemployed Indians.

Bhaio, Behno! Na Khaunga, Na Khaane Doonga! Mai to Jhola Lekar Chala Jaunga!! The question is how big will that ‘Jhola’ be? Will that Jhola be the size of a container? Time will surely answer these hypothetical questions! Anyway, there is no ‘Question Hour.’ The show goes on!