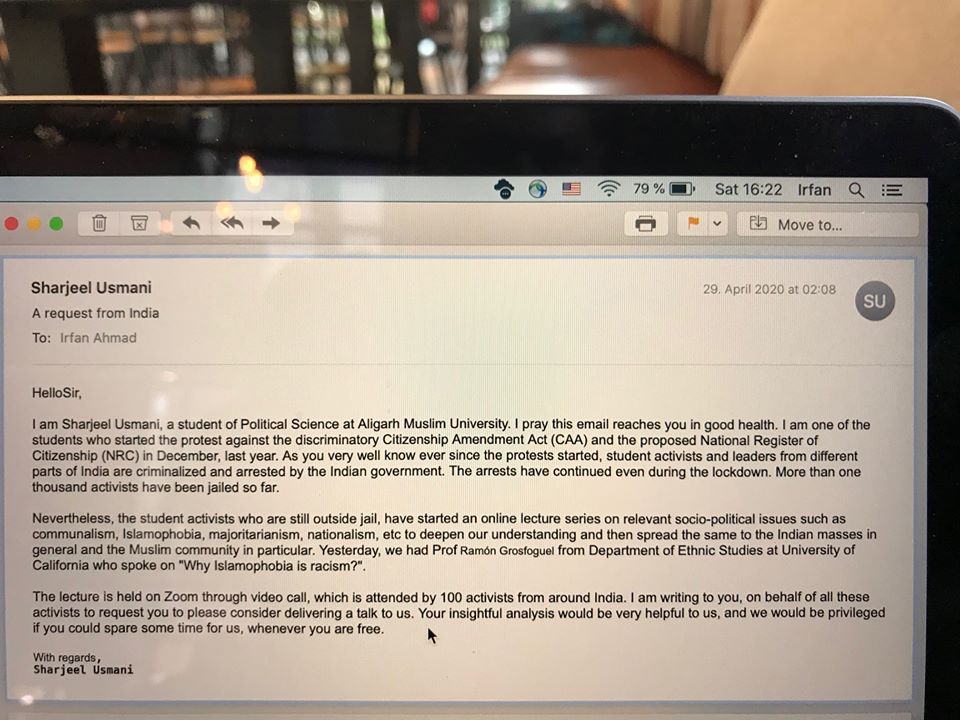 The Unjust Arrest of Sharjeel Usmani as a Public Intellectual

Did I correspond with a “terrorist,” Sharjeel Usmani? According to the official version, this is what it turns out to be since Usmani was recently arrested by UP’s anti-terrorist squad (according to report in The Print).

I never met Usmani in person. Given my interest as a political anthropologist in the anti-CAA movement – about which I did some public writings – I came across his name many times. He himself is a fine writer and a probing thinker, whose writings are available in the public domain. I knew that he was a leading voice in the protest in Aligarh. I also recall reading a piece in FirstPost by him. Subsequently, he wrote a well-researched long article on collective violence and the role of the police. Clearly, it is not a perfect article. No article is. But as a young intellectual who has not even completed his Masters (based on what I know from Facebook), this is surely remarkable.

This precisely is the reason for his arrest. His arrest – unjustifiable in any court which is fair and enacts justice qua justice – marks the third phase/round of the state repression against the CAA movement. The first phase was prior to the Delhi pogrom. The second was soon after the pogrom when instead of arresting the real culprits, the state machinery arrested hundreds of mostly innocent people, predominantly from the minority background. Usmani’s arrest marks the third phase.

Despite the first and second phases of arrests – in which young university students and researchers were put behind the bar, including a pregnant research scholar from Jamia, Safoora Zargar, Usmani continued to speak his mind and raise voice for fairness and justice. Since I don’t know him, I can’t speak of him, much less in entirety. But what is clear is that the regime is fearful of a person, who thinks, and who does as a free person and for freedom, dignity and equality. A coward government is fearful above all of such a critical thinking. Arrest of Uslami and scores of others also raise a fundamental question put by Henry Thoreau (1817–62). Thoreau, who had experienced jail, observed: “A minority is powerless while it conforms to the majority; it is not even a minority then,” and in an unjust order “the true place for a just man is also a prison.”

I join all those who call for the immediate and unconditional release, not only of Usmani, but all others unjustly imprisoned throughout India. If Usmani is a terrorist to be arrested by the ATS, an anti-terrorism government agency, I leave it to you to judge for yourself. To this end, below I reproduce in full an email he sent me on 29 April 2020. This email probably helps us all know what he thinks.

I am Sharjeel Usmani, a student of Political Science at Aligarh Muslim University. I pray this email reaches you in good health. I am one of the students who started the protest against the discriminatory Citizenship Amendment Act (CAA) and the proposed National Register of Citizenship (NRC) in December, last year. As you very well know ever since the protests started, student activists and leaders from different parts of India are criminalized and arrested by the Indian government. The arrests have continued even during the lockdown. More than one thousand activists have been jailed so far.

Nevertheless, the student activists who are still outside jail, have started an online lecture series on relevant socio-political issues such as communalism, Islamophobia, majoritarianism, nationalism, etc to deepen our understanding and then spread the same to the Indian masses in general and the Muslim community in particular. Yesterday, we had Phttps://irfanahmad.org/rof Ramón Grosfoguel from Department of Ethnic Studies at University of California who spoke on “Why Islamophobia is racism?”.

The lecture is held on Zoom through video call, which is attended by 100 activists from around India. I am writing to you, on behalf of all these activists to request you to please consider delivering a talk to us. Your insightful analysis would be very helpful to us, and we would be privileged if you could spare some time for us, whenever you are free.

Irfan Ahmad is a Professor at  Max Planck Institute for the Study of Religious and Ethnic Diversity, Göttingen. This article is reproduced from his Facebook post.