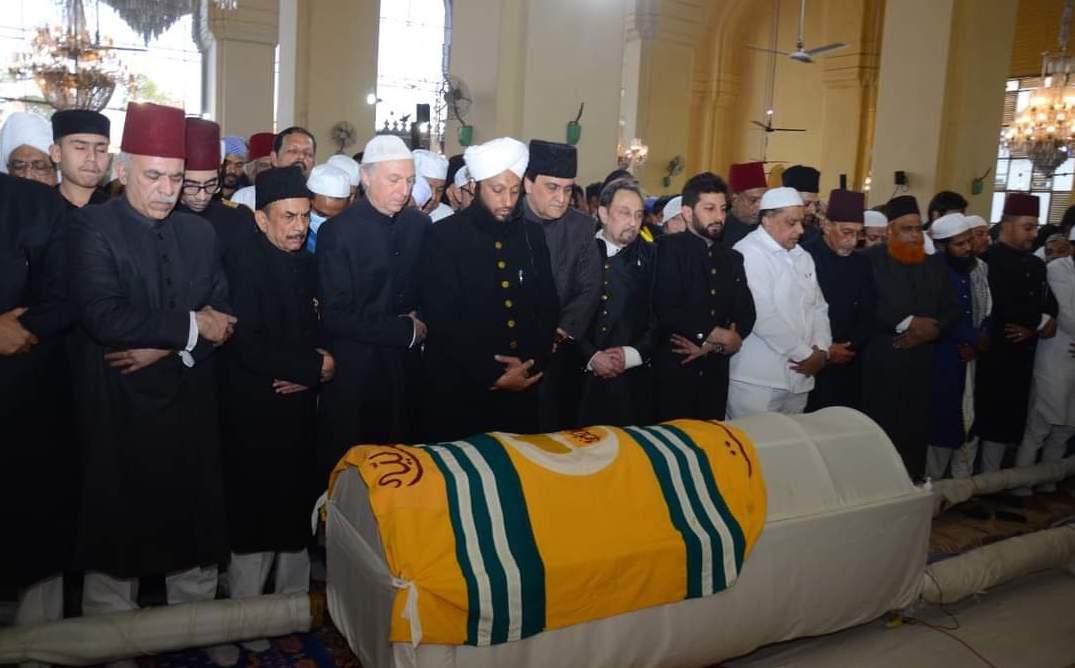 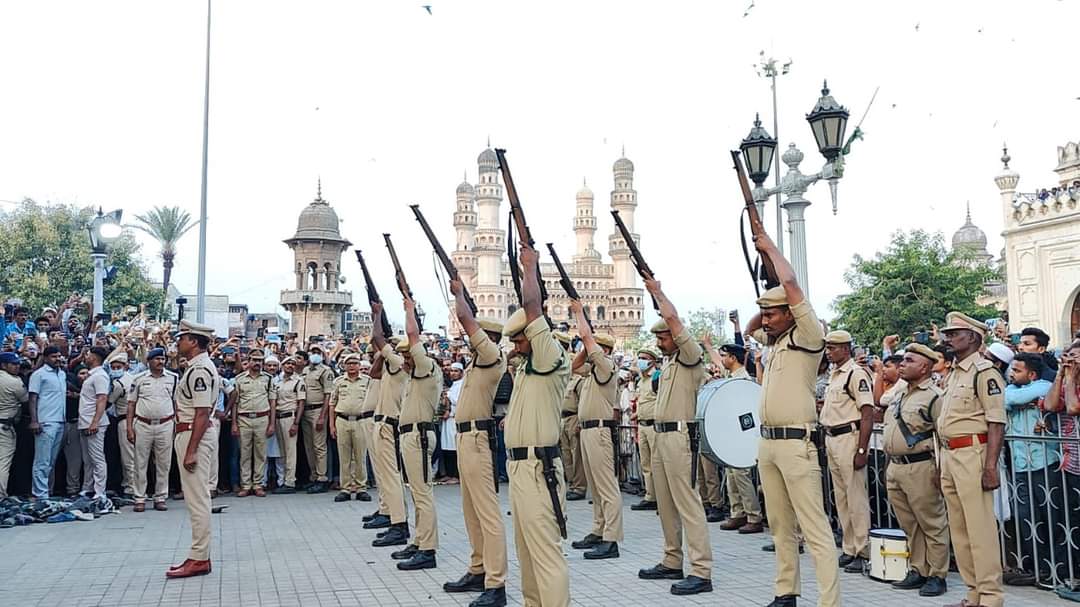 The Last Salute by Hyderabad City Police to HEH the Nizam VIII on behalf of Government of Telangana as part of State Funeral.

Once the much-ruined and the much-maligned Nizam the VIII explained to an interviewer by harking back to my and his common his ancestor, the first Righteous Caliph of Islam: “Abu Bakar was a shepherd, so I see no reason why I shouldn’t be one.” This realization came much later after he blew away an unrivalled jaw-dropping financial fortune left by his grandfather the Nizam VII His Exalted Highness Mir Osman Ali Siddiqui Khan Bahadur, the last absolute ruler of the Asaf Jahi Kingdom of Hyderabad. He continued to live a life of fancy in a dreamland far removed from reality. He lived by selling his diamonds and jewels for a pittance initially. He started taking loans. To pile up his misery, more than 800 people sued him in courts on account of property disputes and loans. Despite the family terms with the Nehru – Gandhi family, the Nizam VIII was relentlessly hunted and haunted by the Central and State Governments in the name of taxes that his palaces, lands, and prime properties were seized. An unprecedented 98 % tax was levied on the properties.  Some of Hyderabad’s heritage was sold to rich Sheikhs from the Gulf, Hollywood actresses, and Bond Street jewellers by Mukarram Jah to maintain his staff running into thousands. The fleecing and constant demands for money by the royal family members left no choice for him. Mukarram Jah wanted to flee Hyderabad and he did it in style. He preferred the sparsely populated Australia. As a result, the love of his life and his wife later Esra Birgin divorced him. Esra should have taken her prince charming to a marriage counselor but that was not to be. The divorce proved to be the beginning of the downfall for the Nizam without a territory. The multi-million-acre Murchison House Station and his expansive mansion in Perth were sold to pay the wages of his 1400 farm workers, repayment of loans to his one-time confidant-turned-conspirator Sadruddin Javeri and for maintenance of penthouse suites at the Metropole in Geneva. Where was the need to maintain penthouse suites in Geneva? Any visit would not last more than a few days or weeks in a year. Hotels could have been booked for those days. Who will instill this economic sense to the ignorant prince? 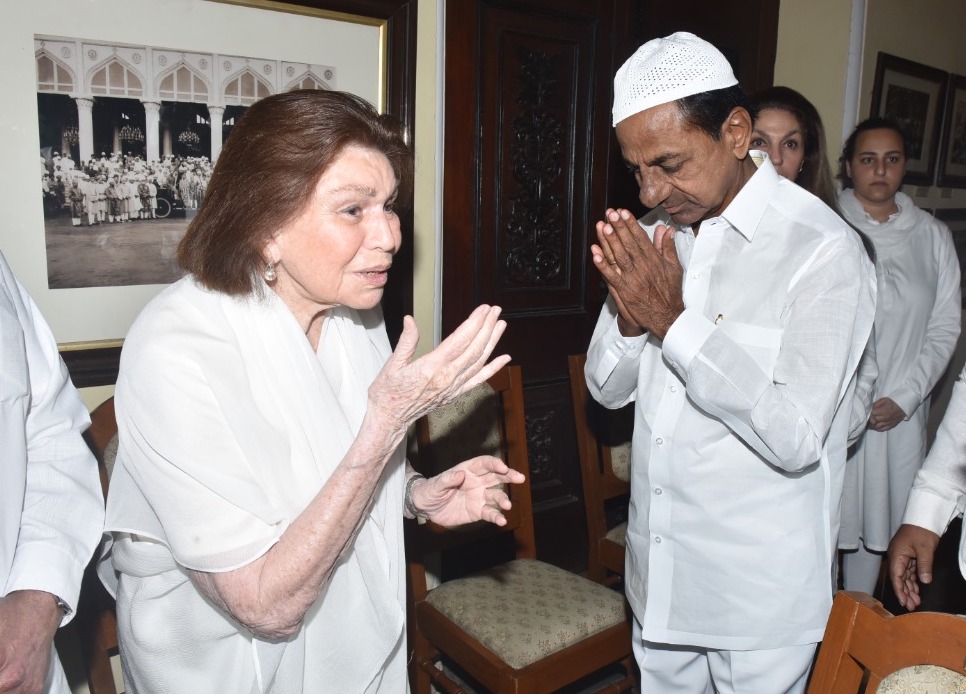 Mukarram Jah Bahadur the beloved prince charming had a roving eye for beauty. Two of his marriages – one with an air hostess Helen Simmons (later Ayesha) and another with Turkish divorcee Manolya Onur cost him a fortune in maintenance settlements through courts.  A steamy romance and marriage with Helen turned into a tragedy when Helen reportedly contracted AIDS in 1987 after an alleged affair with a bisexual man. When she passed away a few months later, Mukarram Jah was devastated. This was not before the Havelock House, in Perth, which Helen, the second of his five wives, stuffed with antiques brought from his Hyderabad palaces “began to resemble Hyderabad in its gaudy and ostentatious heyday.” The Government of India must ensure to get back this heritage which rightfully belongs to Hyderabad. Nizam VIII knew the value of conserving heritage but lost it to ‘Kismet’ (fate) as he termed the misfortunes in his life and the loss of unprecedented wealth himself. 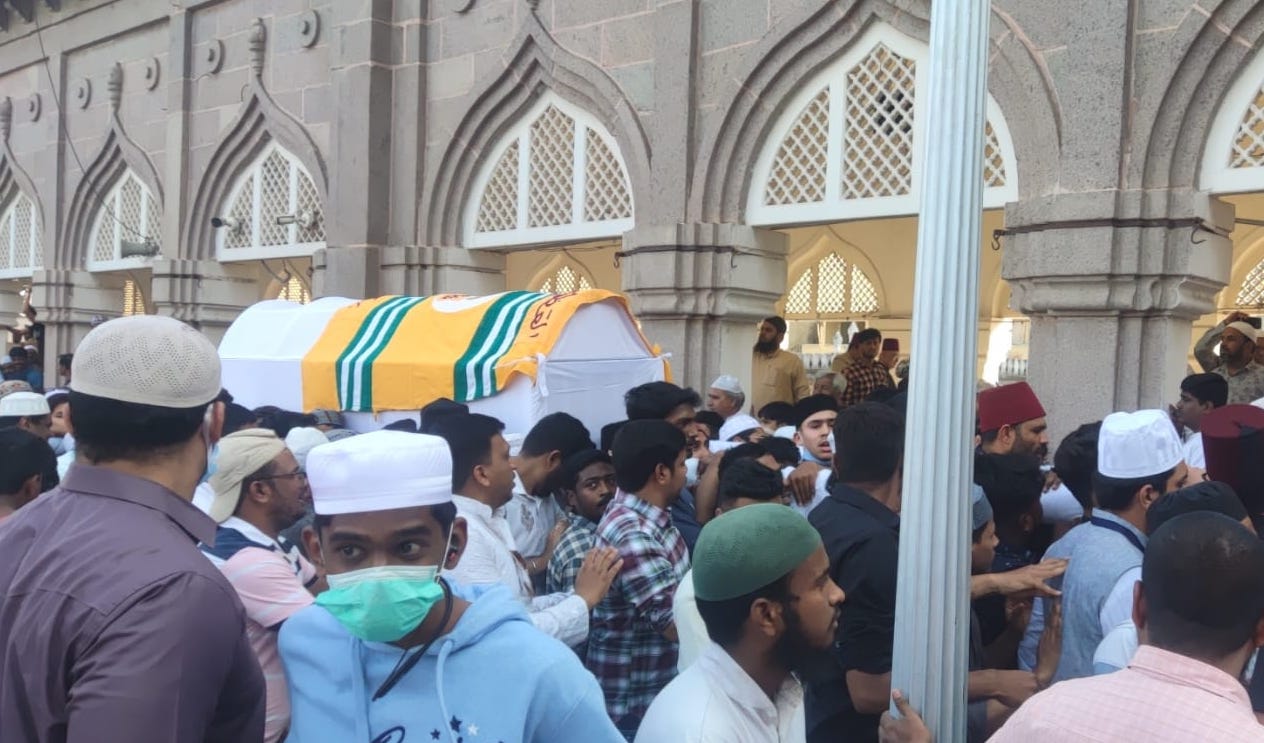 His Exalted Highness Nizam the VIII of Hyderabad Mir Barkat Ali Siddiqui Khan Bahadur on his final journey. The yellow Flag draped was the official Flag of the Asaf Jahi Kingdom of Hyderabad. 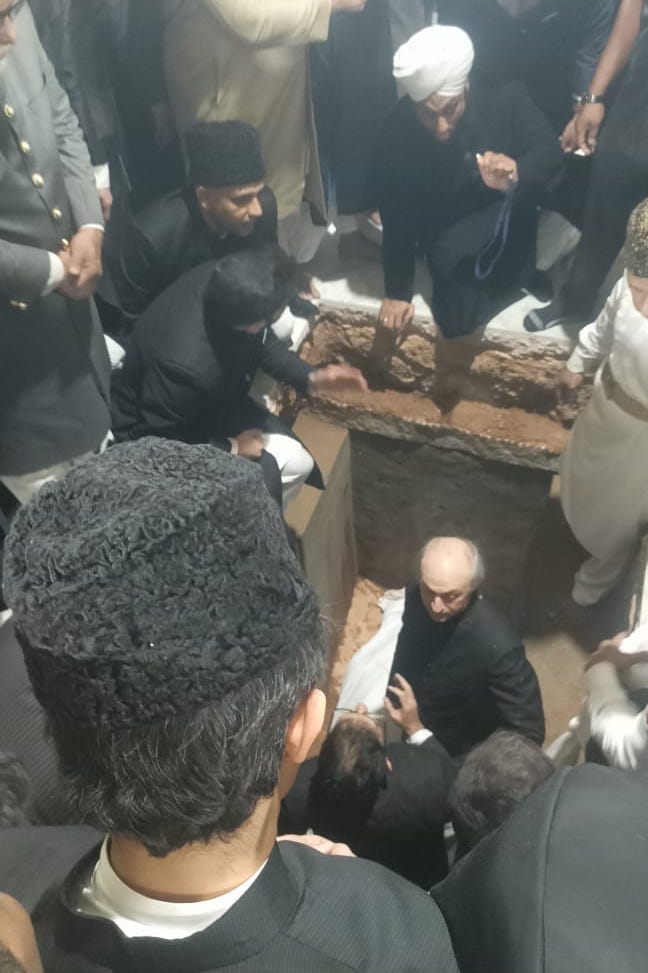 It is significant to mention that Anuradha Reddy has been waging a relentless battle for the protection of Hyderabad’s heritage built by the Asaf Jahi Nizams. She has come out with professional reports about the durability of buildings like the Arts College, Osmania University, and the Osmania General Hospital. She has been alerting the Government of Telangana to conserve these historical properties with much-needed repair and maintenance by experts. 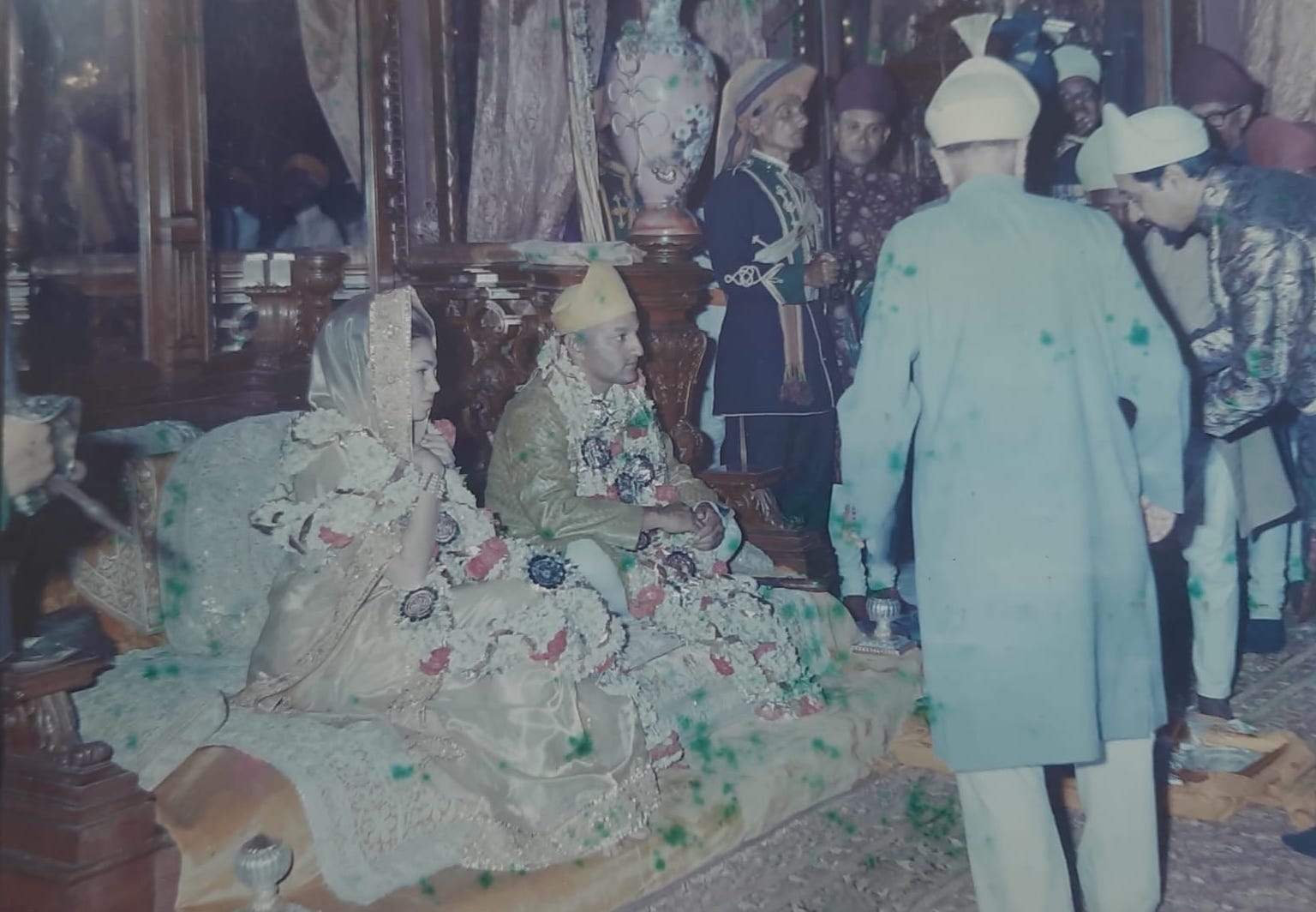 Coming back to the persona of Mukarram Jah, it can be safely deduced that he was one of the strongest men with a torrent of energy. He could lift a Jeep from the front or the back by himself and change the tyre. His strength extended to ‘action’ between the white sheets as narrated to me during an interview for The Deccan Chronicle by his third wife Manolya Onur. It featured on the Sunday Chronicle Cover page in colour. I was taken aback by Manolya’s disclosure and felt shy then to publish it as a part of the interview. I was newly married at that time. I blushed and moved on to the next question. Manolya Onur told me that he twisted her back and literally broke her back during the ‘action.’ Some credit of this giant strength should go to the rich diet and also the ‘halwas’ of Unani Hakeems with their time-tested bed-breaking formulas!

Before I talk about the good qualities of Mukarram Jah, let me delve into the financial mess that he got in despite the advice of his financial advisors. Let me make it clear to my readers that I am neither a courtier of Mukarram Jah nor a sycophant. At the same time, it is not my intention to run down the flamboyant Nizam VIII but as a public figure, he will be subjected to public scrutiny. Even the righteous Caliphs were subjected to public scrutiny though they were almost without any faults or failings. 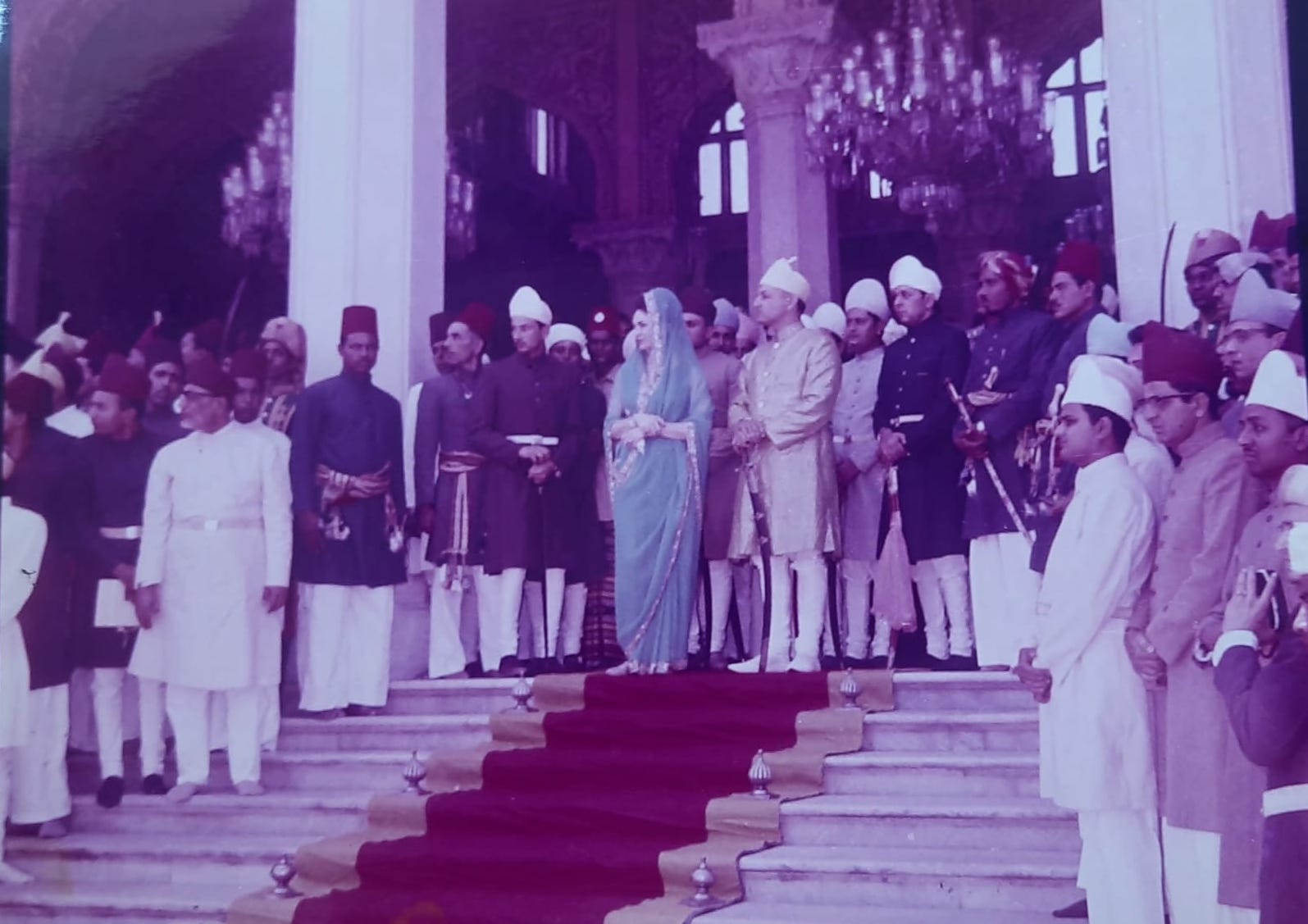 Mukarram Jah had no economic sense, to say the least. His financial advisors suggested to him to invest his money in shares and mutual funds. He knew only how to spend but not to make money from money. Like all royals, he was eccentric. He felt he could do no wrong! Once he told The West Australian, “I know I am the Nizam of Hyderabad and that’s all that matters.” This proved to be his undoing. He could not turn back the clock of financial ruin. He trusted some unworthy cheats and crooks as his General Power of Attorneys (GPAs). In one of his interviews, he had called those who cheated him as ‘Gundaas’ (goons). If Mukarram Jah had spent his wealth wisely, Hyderabad would have benefitted immensely. I could not agree more with Hyderabad’s reputed and authentic historian Prof. Salma Ahmed Farooqui from Maulana Azad National Urdu University (MANUU) when she opined in an article that Mukarram Jah could have done more for Hyderabad! 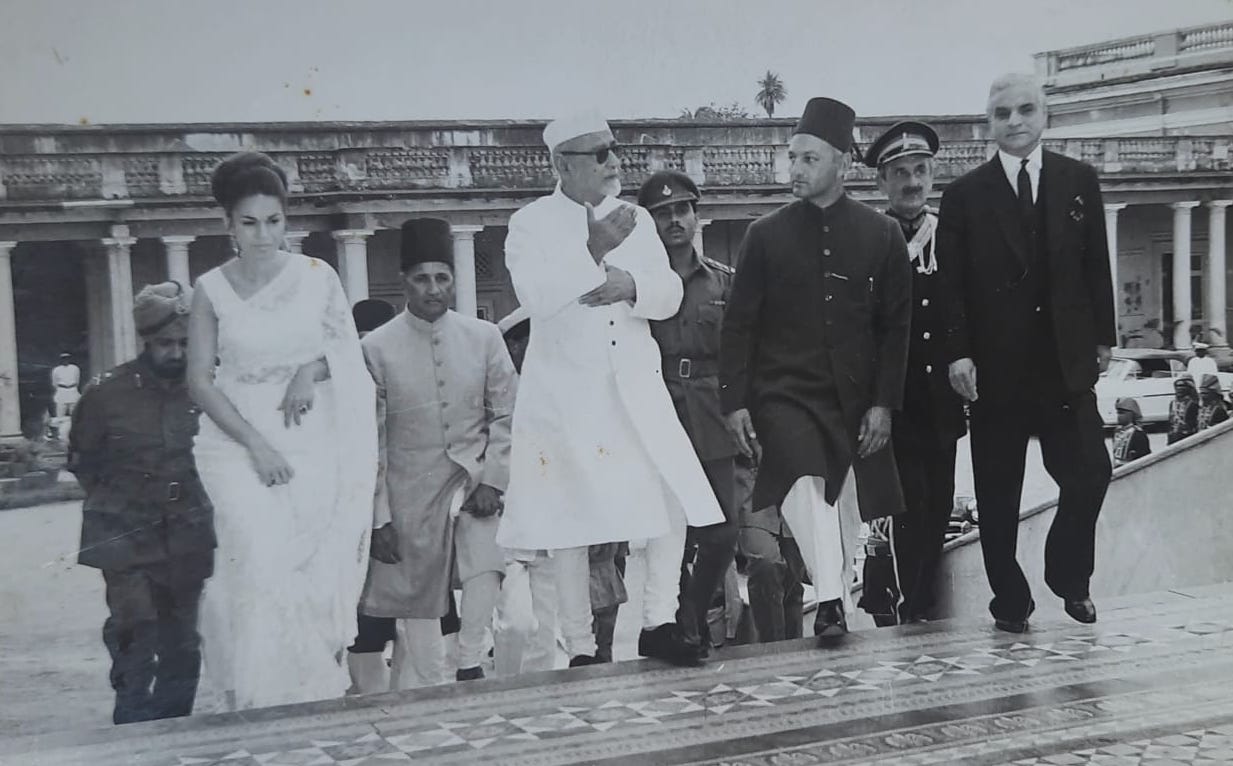 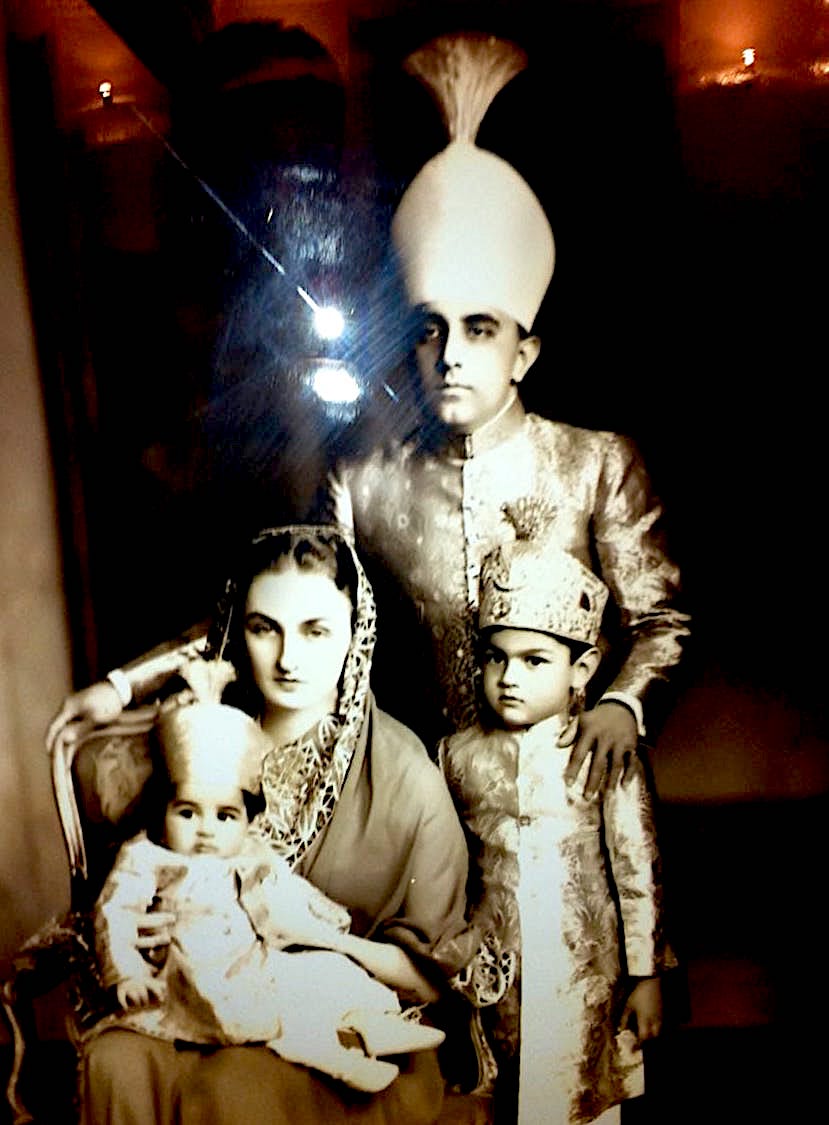 The young Prince standing seen with his parents and younger brother

Hyderabad was in Mukarram Jah’s blood! Finally, he came back to Hyderabad to mingle with the holy Indian soil, unlike the fake patriots and peddlers of hate, who will leave the Indian shores and be a part of the Bay of Bengal upon their death. Bhaiyon, Behnon, aap analogy samajh rahen hain na?  The Government of Telangana must institute the Patriot Nizam VIII Mukarram Jah Bahadur Award for Peace and Communal Harmony for individuals or organizations in cash to the tune of Rs 1 Crore. Capt. Panduranga Reddy and P Anuradha Reddy, worthy Nizamians should be among the first awardees.

It was quite a relief for Hyderabadis to see all the warring princes of the Asaf Jahi Royal Family come together and present a united picture that they are after all One! Prince Muffakham Jah Bahadur, younger brother of the Nizam VIII, had penned a moving tribute to his ‘very special brother’ with whom he had a legal battle. Nawab Najaf Ali Khan also let bygones be bygones despite umpteen legal battles with his cousin Mukarram Jah. He was seen in the front row at the Salaat-ul-Janaza at Makkah Masjid. This gesture was much applauded. 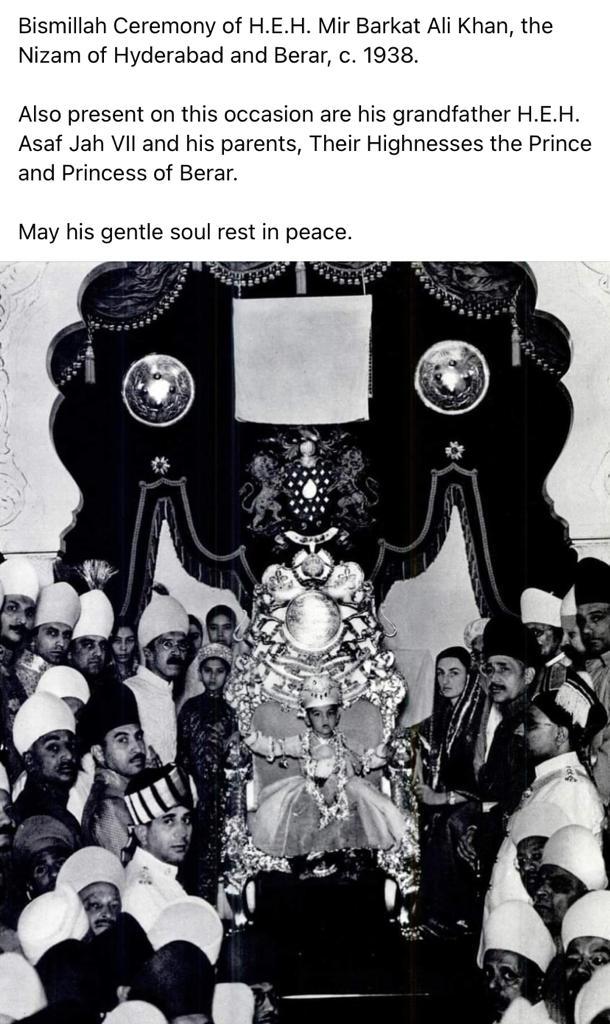 Meanwhile, Senior Congress leader V Hanumanth Rao claimed that the Telangana Government did not call for a bandh to mourn the passing away of the Nizam VIII because it is afraid of the Bharatiya Janata Party (BJP) and Rashtriya Swayamsevak Sangh (RSS). “Rahul Gandhi has a fighting nature. You are afraid of RSS and BJP and you will tell that you will fight Narendra Modi.” “You should have courage…Mukarram Jah has given a lot of land to Telangana including the KBR park. Hitech City was built on the property of Mukarram Jah. You have forgotten their history. The last Nizam gave his authority to Mukarram Jah instead of his son. But you are ignoring him. The state funeral is just for the namesake,” Rao thundered.

All legal battles seem to be on the cards as all the GPAs executed by Mukarram Jah Bahadur become null and void after his death. There is a need for reconciliation and settlement of disputes among the extended Asaf Jahi royal family. Prince Muffakham Jah Bahadur and others should take the lead before their burial lest their financial fortune gets buried deeper. Do not leave litigation for future generations. Divide all assets as per Shariah with internal mediation amicably. Go by Allah’s commands on the division of property. Quran is the best legal book from our Creator. The Muftis and Ulema must come forward to show the way and settle financial disputes. Create one jumbo welfare fund for the community to start colleges, universities, and manufacturing industries! Do not end up giving doles and pensions. Do not make parasites. Make the community educated and employable. Develop business sense among the youth. Mukarram Jah Bahadur rendered invaluable services in the fields of education and medicine. The Mukarram Jah School, Princess Shehkar College, Princess Esra Hospital, and Princess Durru Shehvar Hospital are living testimony to his services. It is time to replicate these on a much larger scale. The Government of Telangana must ensure the protection of the Nizam’s remaining palaces and properties by enacting a new special law to stop snatching and seizing any more properties by the governments in the future too. The so-called KBR Park on Nizam’s Chiran Palace land be named as Mukarram Jah Park. Chief Minister K Chandrasekhar Rao must make good his promise that he would rename the KBR Park as the Asaf Jahi Park.

Mukarram Jah Bahadur was a deeply spiritual person. His belief in our Creator’s Vast Mercy was unshakable. While addressing a gathering on Miladunnabi at Purani Haveli, Mukarram Jah Bahadur had urged the people to ask for Allah’s pardon, believe in His Mercy, and engage in constant chanting of a part of a verse from Al Baqarah 286:

(And Pardon us and grant us forgiveness. Have mercy on us).