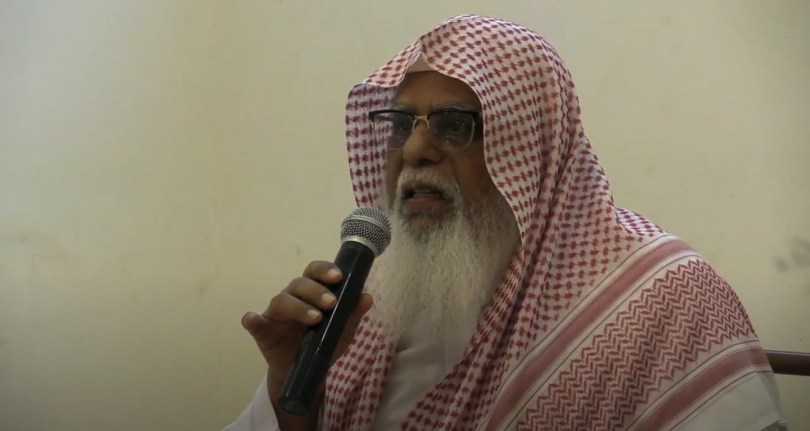 Professor Zia ur Rahman Azmi, one of the most prominent Islamic scholars of our time has passed away on 30 July 2020. His funeral will be conducted at the Prophet’s ﷺ Mosque in Madinah and the burial is due to take place in Al Baqi al Gharqad.

We are reproducing the article written by M Zakir Azmi Nadvi on the life of Professor Zia ur Rahman. It was written three years ago.

From time to time we hear stories about people reverting to Islam. But there are people whose transition from the darkness of their ancestral religion to the light of Islam creates a remarkable impact on Islamic scholarship. If one looks at the profound legacy left by converts such as Mohammad Asad, Maryam Jameelah, Dr. Maurice Bucaille, Muhammad Pickthall, Michael Wolfe, and Pamela Taylor he will be astonished. Professor Ziaur Rahman Azmi is one such personality whose legendary contributions to Hadith literature will be hallmarked in the History of Islam.

Banke Laal (Ziaur Rahman Azmi), who was born in 1943 in a Hindu family of Bilarya Ganj, a village located in district Azamgarh in India, reverted to Islam at age of 18 years impressed by the concept of equality and justice preached by Islam. It was Islam’s unique and humanistic message which led many truth-seekers in the Indian subcontinent to the righteous path by their desire and freewill. There is neither the Gharwapsi program in Islam nor the donation of money for a convert. In Islam, Da`wah is based on the Command of Allah, good intention and sincerity. If you want to be a Muslim you should try to understand the true message of Islam and to be courageous.

Thanks to late Hakeem Ayub who guided Banke Laal to reach the height of becoming Professor Ziaur Rahman Azmi and retiring as Dean of Faculty of Hadith at the famous Islamic University of Madinah. After retirement, he was appointed as a teacher at the Prophet’s Mosque by the decree of the Head of the Prophet’s Mosque Affairs in 22/2/1435 H. Today he is a legend in making.

Although Professor Azmi has authored dozens of books on various important Islamic topics, his voluminous compilation of authentic Hadiths titled ”al-Jami’ al-Kamil fi al-Hadith al-Sahih al-Shamil” is considered as the singular work done by a single scholar since the dawn of Islam. Azmi has taken pain to collect the authentic Hadiths dispersed in numerous classical books. Containing about 16,000 Hadiths dealing with various issues such as creeds (aqa’id), rulings, worshiping, the biography of the Prophet (PBUH), chapters of Fiqh, interpretation of the Glorious Qur’an and many more are the salient features of this celebrated book. Azmi will be remembered for this great service like those earlier compilers of Hadiths collections such as Imam Bukhari, Imam Muslim, Abu Dawood, Tirmizi, Imam al-Nasa’i, Ibn Majah and Imam Malik, etc.

Another legendary work accomplished by Azmi is the “Encyclopedia of the Glorious Qur’an” in Hindi language. Although Muslims had ruled India for about 800 years, unfortunately they did not pay heed to spreading the message of Islam among their countrymen in a way that could attract them to study the Glorious Qur’an to be aware of the humanistic values being preached by it. This unique encyclopedia authored by Professor Azmi deals with 600 topics. It is the first-ever book of its kind authored in Hindi language. In a very short period, eighth edition of this book has been published in India. Considering the growing demand by the Urdu and English audience, the English and Urdu translation of the same will be available soon. This book can be considered one of its kinds in dealing with the topics mentioned in Qur’an. Topics are sorted by alphabetical order. There are photos and maps of some famous places.

His MA thesis titled “Abu Hurayrah in the Light of his Narrations” refutes the accusations made by orientalists about the authenticity of the source of the Hadith, particularly the narrations reported by the famous Companion of the Prophet (PBUH) Abu Hurayrah. The Ph.D. dissertation of Azmi was on “The Judgments of the Prophet (PBUH)”.

In his book “From Ganga to Zamzam” in Urdu language Azmi narrates the story of his conversion and the hardships he has had to go through. His textbook “Comparative Study of Judaism, Christianity, and Indian Religions” is part of the higher studies syllabus at various Saudi universities. Currently, he is engaged in penning comparative study of Hinduism, Buddhism, Jainism, and Sikhism which will be published soon.

Modesty has a vital role to play in character-building. It restrains a man from behaving in an undesirable manner and acts as a shield against lewdness and immorality. It holds the key to piety and good-doing. Despite being a celebrated scholar and renowned personality of Muslim World Azmi’s modesty, simplicity and humility have impressed me a lot when I met him at his residence during my last visit to Madinah Al-Munawarah on 30th December 2016. I am thankful to Brother Ammar Ajmal Islahi, one of Azmi’s students, for arranging the meeting with this illustrious scholar of Hadith in the recent time.

No one could guess that a boy born in a Hindu family one day would become the teacher of Hadith at the Prophet’s Mosque. Indeed, Professor Azmi belongs to the group of born brilliant for whom the wheel of fortune must complete another rotation before the world can appreciate their tremendous contributions.