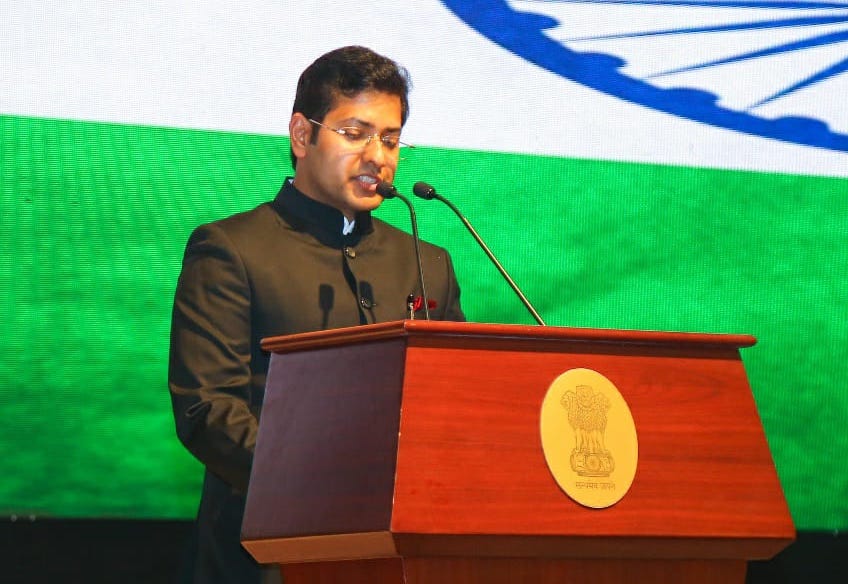 Asim Anwar, IFS, Second Secretary at the Indian Embassy has urged the people to make efforts to preserve the Urdu language. He was speaking in Riyadh at the 200 years celebrations of Urdu journalism in India organized by the International Journalists Fraternity Forum (IJFF). He observed that Urdu is an attractive language which has the capacity to absorb words from different languages. This is the reason Urdu has become popular, he opined. Urdu is spoken in different parts of the country though with slight variations in pronunciation. He felt that languages are alive as they are spoken by people. He urged the Urdu-speaking people to make individual and collective efforts to preserve their language.

There is an increase in the number of people speaking the Urdu language but there is a decrease among the people who can read and write in Urdu, pointed out the banker turned diplomat, Asim Anwar. Urdu is restricted to Mushairas or poets gathering, he lamented. It is significant to note that Asim Anwar is a bright officer of the Indian Foreign Service (IFS). He had secured All India Rank 149 in UPSC 2015. He also writes for the Arab News on economic issues. As a diplomat, Asim Anwar is making tremendous strides in strengthening the Indo – Saudi relations in general and the economic cooperation between the two countries in particular.

The gathering began with the recitation of the Holy Quran by Hafidh Muhammed Muzammiluddin. The patron of the event Dr. Ashraf Ali welcomed the gathering. Basit Abu Maaz made the introductory remarks about the IJFF. Journalist Muhammed Saifuddin gave an impressive presentation about the struggles and development of Urdu in five stages from 1822 – 2022.

M A Majid, senior journalist and Press Council of India member, who flew down to Saudi Arabia specially to attend the 200 Years of Urdu Journalism Celebrations at the Indian Embassy in Riyadh said that 200 years is not a long time in history but there are great influences of Urdu language are quite visible. He compared Urdu with languages like Sanskrit and analysed that Urdu is very young whereas Sanskrit is more than 3,000 years old. He expressed hope that the Urdu language will flourish in the future. We must remember that any community which is deprived of their language end up losing their culture also, he observed. He stressed that the tyrannized community must strive to create political power for themselves.

The veteran journalist Majid questioned the gathering if they are educating their children through Urdu medium. He questioned how the Urdu language will prosper if Urdu people in the name of career, educate their own children in other languages. He reminded the audience of the great contribution of Urdu in India’s freedom struggle.

Some journalists and social workers were honoured with mementos at the grand Urdu event. This was followed by a Ghazal programme by Vasundhara and Nazeer to entertain the elite gathering of Urdu lovers. The IJFF dairy was also released on the occasion.

It is significant to note that Urdu occupies a prominent place in communication in the Gulf countries. There are sign boards in the Urdu language in Makkah and Madina to facilitate the Haj and Umrah pilgrims. Many citizens in the Sultanate of Oman and the United Arab Emirates (UAE) are well-conversant with Urdu due to their blood relations. There are announcements in Urdu at the Muscat International Airport. Many Urdu-speaking women have been married to Arab citizens from the Gulf countries.

I had the honour of making an appeal in Urdu on the Sultanate of Oman’s Ministry of Health (MoH) Instagram to follow the Covid-19 protocol and ensure precautions during the Covid-19 last year. I pioneered and presented the first weather bulletins in Urdu and Hindi on the Sultanate of Oman Television during Cyclone Phet in 2010. Since my days in The Deccan Chronicle, I have been a soldier of Urdu striving for the development of the sweet Urdu language even though am basically an English media journalist.

The sweetness of the Urdu language wafts in the air of all the Gulf countries.