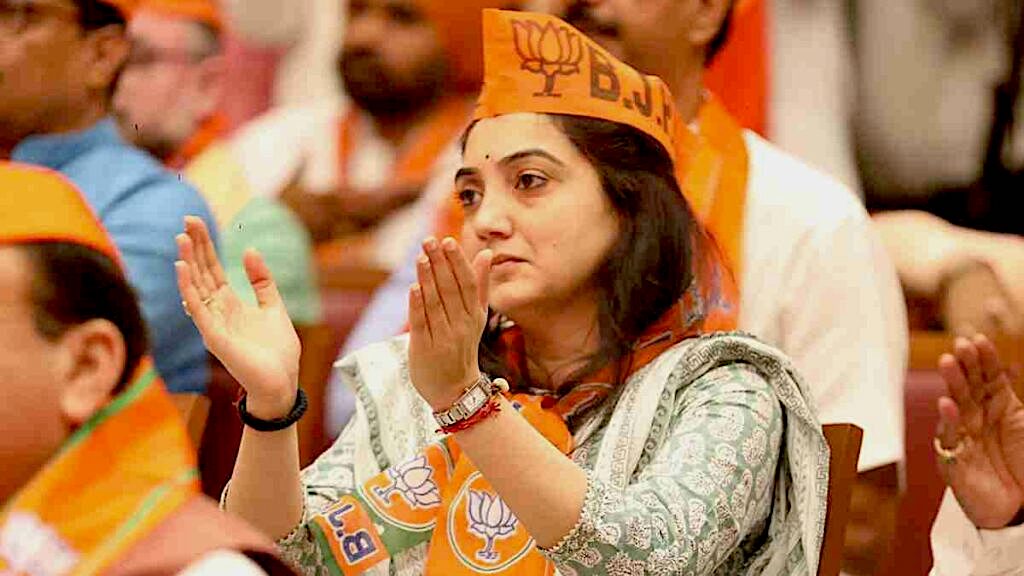 A delegation of Mushtarika Majlis-E-Amal lodged a complaint against Nupur Sharma, BJP Spokesperson at Hyderabad City Police Commissioner’s office after Nupur Sharma hurt the sentiments of Muslims with her derogatory remarks on Islam and Prophet Muhammad ﷺ on Times Now television channel. In the complaint by the delegation, it has been mentioned, “She (Nupur Sharma) used abusive, false and hurtful words against the Prophet and religion of Islam and hurt the feelings of Muslims. By derisively insulting religious beliefs mentioned in the Holy Quran and stating that Prophet Mohammed married a 6-year-old and was having sex with her at age 9, she not only hurt the feelings of Muslims but also created enmity between different sections of society.”

Alt News Co-Founder and fact-checker M Zubair uploaded on Twitter Nupur Sharma’s hateful and disrespectful comments against Prophet Muhammed with a tweet that reads as follows: ‘Prime Time debates in India have become a platform to encourage hate mongers to speak ill about other religions. @TimesNow ‘s Anchor @navikakumar is encouraging a rabid communal hatemonger & a BJP Spokesperson to speak rubbish which can incite riots. Shame on you @vineetjaintimes.’

It may be noted that the lowly character Nupur Sharma attacked Prophet Muhammed’s noble character without ascertaining historical facts. It sounds like a deliberate act and she cannot claim innocence. A notorious hate-monger Nupur Sharma digressed from the debate topic on Gyanvapi Mosque to find fault with Prophet Muhammed (Peace Be Upon Him) and accusing him of marrying ‘a 6-year-old girl’ and ‘having sex with her at the age of 9.’ Nupur Sharma declares herself a lawyer! So, it cannot be a slip of tongue or not knowing the facts.

A party spokesperson is supposed to check her facts well before saying it on television. Nupur Sharma did not apologise for her blasphemous comments which distressed 2 Billion Muslims worldwide. Instead, she chose to blame it on Zubair and alleged that he ‘heavily edited’ the video and set the trolls on her. Hate-Monger Yati Narsinghanand had also insulted Prophet Muhammed (PBUH) and similarly blamed Zubair that he edited his video. The Hindutva extremist Narsinghanand was given bail by the court! In a tweet to the Commissioner of Police, Delhi and the Delhi Police, Nupur Sharma said if anything happens to her and her family, Zubair should be held responsible.

The Delhi Police has not arrested Nupur Sharma for insulting the Prophet of Islam. Nupur Sharma posted screenshots of some tweets and said she was getting continuous death and beheading threats against her and her family because of Zubair’s “attempts to incite communal passions and vitiate the atmosphere by building a fake narrative.”

Delhi Police replied from its official Twitter handle saying “The matter has been forwarded to the concerned officials for necessary action. You will be contacted shortly.” So, it can be clearly seen who is on whose side! Police complaints have been filed against Nupur Sharma in New Delhi, Hyderabad, Mumbai, Medak, and other places.

There was an army of Hindutva extremists which came out in support of Nupur Sharma on social media. The Hindutva hotheads Swapan Das Gupta and Gaurav Bhatia supported Nupur Sharma despite the hateful comments. There was no word of condemnation from them about the blasphemous remarks by her. Nupur Sharma also tagged Narendra Modi, Amit Shah, JP Nadda and Bagga asking for help now that the hateful job was done. Prime Minister Narendra Modi has maintained a stony silence and did not condemn the hateful comments and insult against Prophet Muhammed (PBUH) by the official BJP spokesperson Nupur Sharma. Hyderabad Lok Sabha member Asaduddin Owaisi, The Raza Academy, Mumbai, Indian American Muslim Council (IAMC) and others have condemned Nupur Sharama’s hateful remarks against Prophet Muhammed (PBUH). ‘IAMC today unequivocally condemned Bharatiya Janata Party (BJP) spokesperson Nupur Sharma’s blatantly hateful and insulting comments against the Prophet Muhammad and Muslim beliefs during a @TimesNow segment anchored by @navikakumar’ says the statement from the IAMC.

The Election Commission (EC) must derecognize the Bharatiya Janata Party (BJP) for dividing the country by making hateful and communal comments against Islam and Prophet Muhammed (PBUH) by BJP spokesperson Nupur Sharma. The Delhi High Court and the Telangana High Court must obtain video recordings of the full debate and ask the police to book Nupur Sharma and Navika Kumar under UAPA. Bail should not be considered at all for Nupur Sharma. Times Now should be fined Rs 500 Crore and the channel must be banned forever.

The United Nations Security Council must pass a resolution making blasphemous remarks against Prophet Muhammed (PBUH) and Islam as punishable with capital punishment in all the UN member countries.